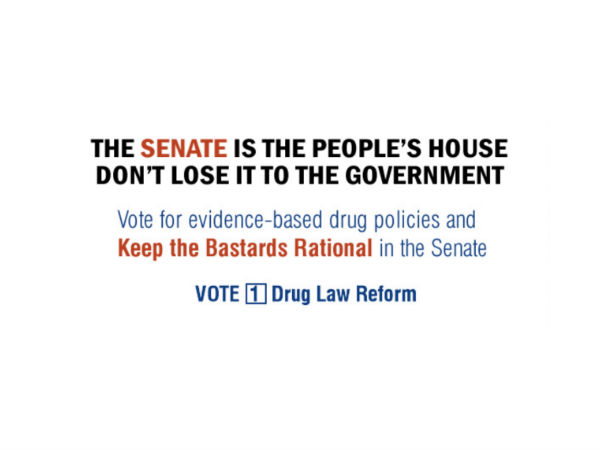 A record number of parties have registered ahead of this year’s election. Over the next few weeks, we’ll be digging into the newest entrants to political thunderdome. Next up, is the Drug Law Reform Party.

Imagine a political party whose members always vote according to their conscience, rather than for political gain.

This is the essence of the Drug Law Reform Party’s campaign.

The new political party has been formed to raise awareness about the harm being done to children and families by the current drug laws and put the issue of drug decriminalisation on the federal election agenda.

The son of the Australian Democrats founder, President Greg Chipp, says while there are a lot of organisations supporting drug addict services, no one seems to be arguing the case politically.

“We need to address the root problem which is basically the law, which criminalises the use of substance.

“We believe the major parties will not address this important issue because they are committed to their own electoral advantage and will pursue a law and order platform at the expense of genuinely looking after people with drug problems,” says Chipp.

The Drug Law Reform Party has a broad drug policy focusing on a range of drugs rather than just the legalisation of cannabis.

“We are totally independent. We certainly have similarities with the HEMP party but their focus is very narrow.

“We aren’t trying to appeal to the hippies from Nimbin we want the Mums and Dads. We think we can save lives, save kids and save the heartache of drug abuse.”

Calling for a Royal Commission into drug law

The DLR Party has a main policy of calling for a Royal Commission into the problems associated with drug use and the cost of the prohibition.

“About seven billion dollars of the consumer market in Australia in drugs going straight into the hands of organised crime and terrorists.  We believe the only way to get to the root problem is to have a Royal Commission,” says Chipp.

“We would be calling for the supply of medical doses of heroin to confirmed addicts so they can be brought into treatment,” says Chipp.

Eventually, they plan to call on the legislation and regulation for all drugs over a period of time.

“We believe in this day and age society can’t afford to be policing this never ending war on drugs that is costing billions of dollars on law enforcement,” says Chipp.

Despite the health and addiction factor of drug use, Chipp still believes drug legalisation and regulation is the most beneficial policy.

“We certainly admit there is problematic drug use and people can come into trouble with it, but the vast amount of people who use recreational drugs don’t have a problem with it – it’s about the same proportion of alcohol.”

“The problem is that you’ve got a prohibition in place but any kid can buy a bag of marijuana in a 500 metre radius of their home.”

“We just think there would be less harm done by making these substances available under conditions.”

According to the National Household Survey from the Department of Health, over two million people Australian’s use marijuana regularly and over half a million people have used ecstasy in the last 12 months.

“Where this really upsets us is that people are getting criminal convictions for possession of a pill or a bit of pot and it ruins a life. It stigmatises the individual, it traumatises the family and can affect employment travel and other opportunities.”

“We exist just to try and get the community to have a discussion about the need to address drug laws. It’s a discussion that has been ignored and will continue to be ignored by the major parties.”

The Drug Law Reform Party have candidates standing in Victoria, NSW and the ACT, visit their website for more information.