Growing up in a family who loved to watch TV, the most horrifying viewing for an impressionable, 11-year-old me, were those Quit ads. You know, the ones with graphic images of tar build-up in the lungs or a gangrenous foot. 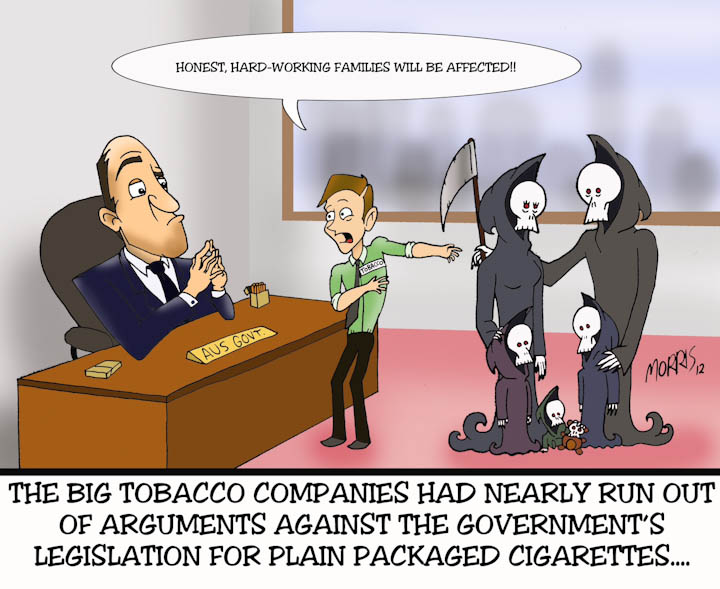 Just thinking about them still gives me the creeps.

The anti-smoking campaign is about to be ratcheted up a notch with the introduction of plain packaging for cigarettes later this year. But will it be effective in stopping Australians from taking up the habit each day?

A review prepared by Cancer Council Victoria found that the branding on cigarette cartons can have a significant impact on young people.

The authors of the report noted that the gold coloured and formatted packs were considered less dangerous than their red counterparts by 31 per cent of adult smokers in a UK study.

Similarly, Marcus Munafò, professor of biological psychology at Bristol University, told the Guardian that branding can lure smokers into thinking some brands are safer than others.

‘Smokers can believe that some brands of cigarettes are less harmful than others due to packaging, for example substantial false beliefs about the relative risks as a result of terms such as “light” or “mild”, brand descriptors of “taste” or lighter colours being used on packaging. Plain packaging reduces levels of these false beliefs,’ said Munafò.

A 2009 study conducted by David Hammond at the University of Waterloo found that plain packaging has three benefits: ‘Increasing the effectiveness of health warnings, reducing false health beliefs about cigarettes, and reducing brand appeal especially among youth and young adults.’

The introduction of standardised cigarette cartons in Australia will help curb the smoking culture. However, it needs to be supported by a continuing and ever-present campaign outlining the negative qualities of the addictive habit. Quit and the Australian government must work in conjunction to drive the message home that smoking causes one in nine cancers and one in five cancer-related deaths.

There’s no doubt that plain packaging is a step in the right direction. The strongest evidence for this is the fact that the tobacco giants are opposing it.

There is one thing that both parliament and the tobacco industry agree on: the impact of the legislation.

‘Tobacco companies invest a lot in research, particularly in statistics. As the it-won’t-affect-us-honestly-it-won’t ads increase, you can bet they reflect the anxiety of the industry,’ former tobacco executive Craig Seitman wrote recently in the Sydney Morning Herald.

There is no question about the legislation striking fear into the heart of the tobacco industry. If it didn’t, there wouldn’t be such a movement against it. Like all companies, the tobacco giants are driven by the dollar and argue that plain packaging will affect their bottom line.

If, as tobacco lobbyists say, there is no evidence of the legislation having any effect, why are they spending so much time and money opposing it? Surely if it was pointless, the tobacco giants would simply ignore it. Their money would be better spent elsewhere.

A cigarette carton is now the only place where tobacco companies can advertise their product. They can’t advertise during a football match, they can’t place an ad in the paper, and they can’t put up billboards in the streets. The very fact that they are fighting the legislation should say that it has some merit. It’s understandable that the companies want to hold onto their last avenue for branding, but surely they can see that their line of attack is groundless. Can’t they?

Tobacco companies claim there is no evidence of plain-packaging success. They say the standardisation infringes on trademark rights, and assert that taking away a company’s individual mark will give rise to the world of illicit trade, lost revenue, organised crime and youth smoking. These scare tactics contradict the crux of the tobacco companies’ argument – that plain packaging is a waste.

Whether you agree with it or not, the power of plain packaging is obvious. Even the tobacco giants can’t deny it.