If there’s any time to ask your friends, family or work mates if they’re OK, it’s today.

R U OK? Day is a national day of action dedicated to inspiring people, from all different backgrounds, to regularly ask each other: ‘Are you okay?’. With just three simple words, the effect on someone’s mental health and outlook on life can be changed for the better. 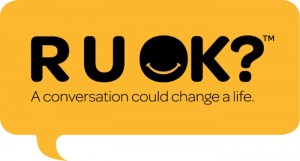 R U OK? Day hopes to help end suicide by empowering people to make a difference through open, honest communication and to make real connections with others. Usually, people suffering from depression and mental illness will not explain their feelings to anyone. They feel too embarrassed, ashamed and sometimes guilty to talk about their problems. An Australian survey in 2006 reported, one in five people who had depression wouldn’t tell anyone.

Siann Bowmen, a specialist in early psychosis thinks that R U OK? day is ‘fantastic’. She says: ‘It can make a great deal of difference if the person asking the question genuinely wants to know and is not afraid of hearing that someone is not OK.’

While asking someone if they’re OK seems like an easy, everyday thing, Bowmen believes that listening to the answer is really the most important part of the conversation.

The beginning of R U OK? day was inspired by the death of Barry Larkin, who took his own life in 1995. The shock of his death left his family dealing with a range of emotions. However, instead of being brought down by his grief, Barry Larkin’s son, Gavin Larkin, decided to turn his emotions into something positive, becoming the founder of R U OK? Day.

R U OK? Day began in 2009 and after only 3 years an estimated 58% of the Australian population know about the national day of action. Gavin Larkin died from cancer in 2011, at the age of 42, but his legacy and mission continue to thrive.

In an article he wrote for The Punch, Gavin Larkin says ‘the stat that really pisses me off is that for every person who takes their own life it is estimated between 10 to 15 try. Which means up to 40,000 Aussies get to the point that they consider suicide a valid option, every year.’

According to the Australian Beareu of Statistics more than 2,200 Australians commit suicide each year, and men are around 3 times more likely to die by suicide than females.

R U OK day is a great way to stop little problems from turning into big ones. For those 10-15 people that try or consider suicide, simply asking ‘Are you okay?’ may just be the thing to change their mind.

Larking continues in the article to say, ‘I don’t know if asking my dad R U OK? would’ve helped. I suspect there was a point where it may have. In retrospect I wish I had had the opportunity.’

The worst thing in life is regret. Asking someone if they’re OK is a small gesture that can go along way. When it comes to mental illness and depression, every little thing helps.

The campaign also helps those that are suffering from mental health problems, with information and encouragement on how to say ‘I’m not OK.’

Helping a friend or family member, who may be suffering from a mental illness, can be a difficult task. Bowmen suggests ‘Don’t give up. Keep loving and caring for them, as long as it takes. Keep trying to get them help if you are worried.’

Bowmen says that ‘People with mental illness who are not psychologically isolated and have family or friend support often have a better outcome than those who don’t.’

This is what makes R U OK? Day so important. It’s not restricted to your friends and family –  by simply asking your co-worker, barista or even the lady you’re sitting next to on the bus, you could be helping someone who doesn’t have any family or friends to lean on. R U OK? Day is celebrated nationally, and as a nation we should all help lower the suicide statistics by simply asking, ‘Are you okay?’

When it comes to the causes of mental illness, Bowmen says ‘There are many reasons, everyone is different and everyone has a different story. It’s in the story.’

By stopping and listening to someone’s story, you may be able to change the ending.