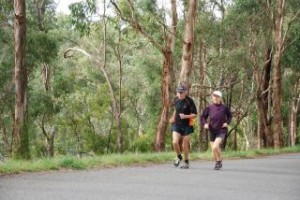 Ten years ago, Janette Murray-Wakelin, already a vegan, decided to become a raw vegan after being diagnosed with breast cancer, choosing to combat the disease by adopting a healthy, fresh, uncooked diet and keeping fit.

Janette and her husband have been running marathons for years. In 2000, Janette and Alan ran the length of New Zealand, all 2182.2km of it, completing 50 marathons in 50 days beyond the age of 50! Now they have decided to take on a new challenge – Running Raw around Australia over the course of 2013. Given that a lap of Australia is approximately 15,500km, the 60-year-olds will effectively be running 365 marathons in a year.

The couple moved to Australia three years ago from Canada. For some time they had been thinking of running across Canada, but after moving here they decided to run around Australia instead. Simple as that. And by running all the way around, they hope to reach a lot more people with their message. They want to show people, by example, what you can do if you make the right lifestyle choices, with regard to yourself, the health of others, the community, and the environment.

Janette says they couldn’t do this on any other diet, and that’s the point they’re trying to make. It’s not that she believes everyone should be out there running a marathon a day, but she wants to prove that the better your diet is, and the more positive lifestyle choices you make, the greater your choices are in terms of what you can do.

‘We will be giving presentations as we go around. These will be held in all the major cities and significant places around Australia. Each day when we finish the day’s run we’ll have something scheduled,’ Janette says.

‘The key is for people to consistently see what we are up to, instead of people saying, “Oh yeah, they took off last week,” and then they don’t think about it anymore.’

Being a raw vegan and training for a marathon, it is crucial for the pair make sure they get enough calories for their endurance training, and calories that are going to be fully nourishing.

Janette explains that they’re looking for fuel all the time. They’re consuming about eighty per cent fruit (fresh, ripe, organic fruit), which provides the nourishing calories, and ten per cent of their protein comes from greens.

‘We also have a huge salad [for lunch] every day. So, probably a salad the size of our one that would cover about two weeks worth of salad for most people,’ she laughs.

You may of heard of athletes ‘blood-dosing’ back in the day – putting oxygen into their blood to give them more ‘oomph’ (illegally).

‘We get ours direct from the chlorophyll in the greens we eat, which oxygenates our blood-stream,’ says Janette. ‘So it’s fully oxygenated all the time. In doing that we’ve got unlimited energy basically. So, we can go and run a marathon a day!’

Janette says ‘staying focused’ is the biggest thing when training for an event that is six or seven months away.

‘When you’re fully trained, which we are pretty much all the time, and fully nourished you’re ready to go. So, you’ve taken care of your health side of it, and your physical side of it, then the rest is mental.’

The couple run at least fifteen kilometres a day. Mid-week they run about twenty to twenty-five kilometres, depending on what’s going on that day. At the end of the week, they run 42.2 kilometres – a full marathon.

‘We’re keeping the body in touch with the fact that this is going to go on every day,’ says Janette. ‘There’s not going to be any breaks here. At any time we could go out and start doing what we plan to do, starting January 1. But of course, we need the time to actually prepare for the run in all the other ways.’

A typical day means getting up in the morning and having lemon juice, to put the body in a positive alkaline state. After that they make green smoothies or one that is heavy in banana. They drink one glass of it before they go for a run, and they take some dates with them on the run to keep the blood sugar up. When they return home they usually drink the rest of that smoothie to replenish what they’ve used up.

During the run around Australia, the pair have chosen to support the Australian Paralympic Committee, The Gawler Foundation, Kids Under Cover and Animals Australia to bring awareness to charities that people usually think will not affect them.

‘All four charities really come together as one, in that the message is the same,’ says Janette. ‘They represent the various facets of what we believe in, bringing awareness to what is being done and what needs to be done’

If you want more information on Running Raw Around Australia 2013, want to volunteer your time, donate or sponsor Alan and Janette on their run you can go to their website which will be constantly updated over this year and the next.

Madeleine McCarty is in her final-year of a Bachelor of Arts with a Major in Media Studies at La Trobe University. She is a former upstart editor and now feels like going for a run. You can follow her on Twitter @MadeleineKMcC.