Last weekend, Robert Doyle joined Twitter and Facebook as part of his campaign to be re-elected as Lord Mayor of Melbourne.

‘Hello. I am Robert Doyle, the Lord Mayor of Melbourne. I’d love to chat directly about what interests we share and concerns you have about Melbourne.’

I will give you some background why I found this interesting and then lay out the series of events that lead to Robert Doyle making a quick exit out social media.

I am an active member of the worldwide ‘Occupy’ movement. In particular, I am part of the local node of concerned global citizens that came together in Melbourne’s City Square last October to try and work out the world’s problems. It was the most beautifully human experience of my life. I wrote an email to Robert Doyle saying as much just before the eviction. It was never answered.

A lot of my idealism and trust was crushed when police officers in riot gear stormed our makeshift home on the morning of 21 October 2011. They forcibly removed my new friends, trashed my bike along with lots of other people’s property and then proceeded to herd people through Melbourne with horses and clouds of pepper spray.

Robert Doyle looked down from his balcony as Melbourne resembled a war zone.

The media reported the clashes as ‘violent’, but to say that is a bit uneven because there have been zero accounts of protestor violence compared to at least 43 documented instances of police violence. I was not arrested, because I was not doing anything illegal. I was taken out with an arm around the back and thrown into the crowd.

I quickly showered then headed back into the city where the Occupy Melbourne legal team was taking statements. I was the sole surviving media team member who wasn’t in jail or traumatised beyond a functioning state.

We stayed up all night. We released multiple press releases outlining the shocking cases of police violence and the facts such as ‘13 of 17 truckloads of peoples’ belongings had been illegally dumped into the tip’.

We called for an independent inquiry, because we knew we were on the side of truth and law. City of Melbourne Councilor Cathy Oke contacted us and said she would back our call. She sounded kind; a gentle friendly voice. I told her I was being followed and I feared for my and the other organisers’ safety. She said she could put me in contact with some ‘good police’ if I needed protection.

On Monday 21 October 2011, Robert Doyle wrote a vitriolic piece of spite in the Herald Sun titled ‘Selfish rabble got what it deserved’, that was full of lies that anyone with a hint of critical reasoning should have been able to sniff out.

That is when my belief in journalism and the mainstream media broke.  The ABC’s Jon Faine stood up to Doyle’s spin and put forward the case that an inquiry was necessary in an explosive interview.

It did not seem to make much of a splash in the rest of the media, who chose to basically just reprint Robert Doyle’s well-crafted press releases, rather than the truth.

That is when I made the website ‘Doyle vs. Reality’ to try and get the truth out there and show that we were not as Doyle put it repeatedly ‘professional protestors’. People could upload images of themselves with their stories online. It felt good to be able to get a little truth out into the world.

Cathy Oke did call for the Future Melbourne Committee to support the Occupy Melbourne protestors’ call for an independent inquiry into the eviction from City Square. We did not try to lobby the sitting Councillors. We still innocently believed that they would make the right choice.

It was denied by a slight majority of Councillors on the grounds that they thought there would be an inquiry one day, but it was not their job to bring it about. I have since been made aware of accusations that Robert Doyle has a secret City of Melbourne Council, where decisions are made behind closed doors and where parties can wheel and deal.

We have been seeking recourse in the courts for more than 10 months with injunctions and other legal things that I don’t understand. There has been constant police, council and media harassment against any attempt to re-occupy.

We will probably win in the courts, but it is going to take years. We don’t have years. We are being suppressed now. The world needs change now.

So, when we saw our Lord Mayor Robert Doyle joined the social media world in his attempt to be re-elected, we came up with a social media campaign called #AskDoyle .

It was designed to get people to ask Robert Doyle why he didn’t want an independent inquiry into the events that have surrounded the Occupy Melbourne protests. Before we were able to launch the campaign, people had started doing this anyway. I woke up last Friday morning to find that he had cancelled his Facebook page. 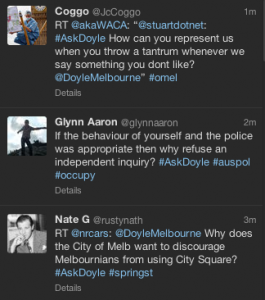 I posted the above photo on our Facebook page and launched the #AskDoyle campaign, directing people to Tweet their ‘concerns’ to the Lord Mayor of Melbourne. People did, the media picked up on it, and Robert Doyle shut down his Twitter account. We have now started a blog asking people to ‘please upload screen shots of the questions that you have asked that have not been answered’.

And that is where the story ends — for now.

Let’s wait and see what his next move will be in what is feeling a lot like a game — a game I would rather not be playing, but one that Doyle has forced upon us.