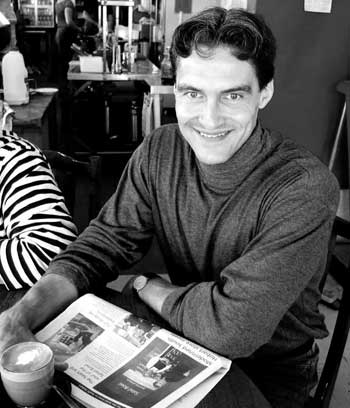 Rodney Croome sees himself as an activist first and a journalist second. However, he stresses the importance of using his writing talents to further his favourite cause: the end of discrimination for gay, lesbians, bisexual, and transgendered people. Croome has contributed to several columns over the years and also keeps a personal blog on the advancements of marriage equality in the political sphere. Having conversations with the likes of Australian Prime Minister Julia Gillard about equal rights for gay marriage, is a common occurrence. He then takes his criticisms of the Australian government of the day to the page, and updates ‘Croome with a view,’ his column for Gay News Network online.

Seeing as you started writing because you wanted to further your advocacy, how important do you think journalism is in the fight for equality in gay marriage?

The importance of journalism? Well I think it’s very important that I, as an advocate for an issue, write in a style that is, if you like, journalistic. By that I mean I can’t just write columns or opinion pieces or commentary, which expound a particular point of view. They [the columns] need to have an appeal to a wider audience. They need to explain what the issue is, as well as expounding a particular point of view. They need to explain to people where we are on a particular issue and how we came to be there; what the current situation is. That helps make the writing more interesting, I think. It helps give it a wider appeal.

In terms of the journalism of other people, certainly it’s important for other journalists to be open to write about an issue in a way that explains it; that gives it some context and gives it a narrative. Too few journalists do that because they don’t have the capacity to understand where an issue is coming from and where it’s going. They just write the immediate event and leave it at that – and I often think that’s a shame because readers crave that narrative and the attention span of the mainstream media is often so short. Providing that narrative is something that I can do.

How did you begin writing your column ‘Croome with a view’?

I’ve written quite a few columns for various newspapers over the years. That column was something I was asked to do by the editors of that particular newspaper, on the basis that I have some understanding of the politics of gay rights. I have worked in the area for a long time and I can reflect on it. That gets back to what I was saying before, my advocacy is not a narrow expounding of a particular issue, telling people what to do or what to think. That’s not me at all. I like to explain and put things in context, as much as I can, in 350 words, and give some context for the issues of the day.

How do you continue to write so positively on the issue of equal rights and gay marriage? It seems like a topic that is so full of challenges and obstacles.

I am optimistic. I don’t think you can consistently write in an optimistic way unless you actually feel that. The reason that I’m optimistic is that I’ve had enough time working on the issues over the years to know that – to use what is rapidly becoming a cliché – things do get better, and that this reform will be achieved. Having that faith in the Australian people, that they will increasingly report and demand this reform, having faith in the fact that it will eventually be achieved, means that it seems pointless to me to focus on the negatives. It means that what may be a hindrance or a frustration today won’t be tomorrow, and there is no point in dwelling on it because it just prolongs the frustration and the obstacle.

Do you ever feel like you’re taking a risk through your writing because you are outwardly criticizing the government with your articles on Julia Gillard and things like that? Is it just something that needs to be said?

Do you think you will continue writing after you have succeeded at your goal, after legal gay marriage in Australia, will you continue to write?

What is the most rewarding part of your job through your writing?

It’s the feedback. Getting feedback from people who feel that I’ve explained something that they didn’t know or that I’ve inspired them to take action.