In just over 24 hours, 21-year-old Ben Hornstein – better known as Skyden – will catch a glimpse of a reality he never dreamed he’d be part of.

On Saturday night he will launch his first single, Burning Light, featuring singer/songwriter Saska, in the presence of thousands of spectators at Melbourne biggest venue, Anyway.

Every now & then at Vicious we uncover a gem producer who goes on to massive things. We have a prediction: Skyden…. http://t.co/WW4qkwZUGU

“When I started DJ-ing I never thought I’d get to where I am now,” says Hornstein.

“I saw my first DJ when I was 17, and I got really inspired by him. I liked how he controlled the crowd and how everyone had a really good time, including myself. And ever since then, I’ve wanted to replicate that.”

Growing up in the South-Eastern suburbs of Melbourne, Hornstein was raised with a rich classical music background. He spent many years playing the saxophone, which he now likes to incorporate into his mixes.

“I’ve always had a passion for music, ever since I was young. I’ve appreciated all different genres, from heavy metal to classical, but it wasn’t until I was about 16 that I developed an interest in electro music,” he says.

Like many others, he began his amateur career at house parties, but soon after he turned 18 he experienced a side of the music industry he did not enjoy.

“When I got into the club scene I was doing a lot of promotion for my gigs which, to a certain point, I can only take so much of,” says Hornstein.

Promotional DJ-ing is common at night clubs. It’s when the managers choose their acts based on the amount of people they bring to the premises, rather than their performance ability.

“It was all about the money. I don’t like to get caught up with the politics of it all,” he says. 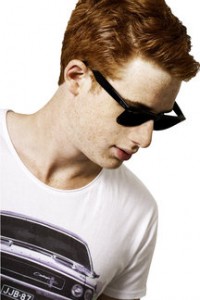 When faced with the ugly truth of the music industry, he decided to quit promotional DJ-ing and get serious about music production, only to find out that it wasn’t going to be an easy process.

“I made Burning Light over two years ago, and it’s what got me the record deal so it was worth the wait,” says Hornstein.

After distributing the song to many recording labels and getting knocked back each time, founders of Vicious Records, John Course and Andy Van, decided to give the budding star the opportunity to kick-start his professional career.

Course describes Hornstein as “driven, enthusiastic and talented”, and according to him, those are the qualities necessary to make it in the industry.

“We see great potential in the demos for such a young artist, and we think there is a great future for him,” says Course.

“I was shocked to be honest, because Avicii is one of my idols. I would do anything to get where he is,” he says.

And the team behind Vicious Records believes that is exactly what he will do.

“I think the world is his oyster you know, guys like Dirty South and Tommy Trash started at Australian labels, and now they are globally-big names. There is no reason why it can’t happen to Ben,” says Course.

Despite being on the verge of cracking the volatile industry, Hornstein refuses to consider a back-up plan. He dreams of being globally renowned for his music, hoping his eager attitude is enough to get him there.

“I am all guns blazing. Go hard or go home,” he says with a huge smile on his face.