The month of November truly gives credence to the adage that nothing good happens after midnight.

At least, this is the case for many newly graduated high school students from across the country, as they hit the beaches to soak up the sun and bask in their own self-reflective glow of being ‘free’ from the confines of year 12. 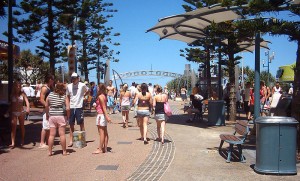 The annual tradition of Schoolies is once again taking hold, resulting in a bunch of barely-legal teens drinking well beyond excess, ensuring a bunch of regrettable and barely memorable decisions.

Yet, just as predictable as tales of troubled teens emerging across the country, is the time-honoured tradition of those whose teenage years were a decade or three in the past lamenting the style of behaviour on display.

The usual array of ‘kids nowadays’ rhetoric that spews forth from the more senior reaches of society is certainly nothing new, and by no means comes as a surprise.

However, when the topic of discussion is the degeneration of sways of youngsters into little more than binge drinking monsters, it’s an act rooted in selective memory on behalf of the older generations.

Allow me to explain.

A few years ago now my Dad turned fifty, and decided the best way to celebrate was to spend the night acting like a man closer to his mid-twenties. Over the course of the evening, champagne and Crownies were consumed, as some of his oldest friends shared stories and reminisced about times that seemed as foreign now as they were distant.

Such stories were capped off with an acknowledging bow of the head or a nostalgia-laced chuckle, and often a variation of ‘we were kids back then’ or similar sentiments uttered.

In other words, it isn’t like the art of potentially questionable decision making fuelled by outside elements has only been around since the dawn of the iPod. In reality, for as long as there’s been alcohol and certain other substances, the spectre of public indignation has loomed.

And, while it may fill column inches and help sell advertising space to suggest that a spate of underage issues are spreading across the country and rapid-fire pace, the truth is that it’s always been there. The only difference is that now it’s documented; often by the delinquents themselves.

The sort of behaviour that was prevalent in the 1960s and 70s is the stuff of legend. Woodstock, The Rolling Stones, the Sexual Revolution, Marijuana and LSD. Judging from the sort of anecdotal evidence that exists around that time period, I’d have a hard time keeping up with my father and his fellow cohorts. But, that’s just it. It’s legend, anecdotal and un-recorded.

Yet, thanks to the rise of social media and the way today’s Schoolies-aged users have taken to the platforms with reckless abandon, a much greater degree of their life is not only public record, it’s broadcast via a series of online channels. For better or, in this instance, worse.

Go to the Twitter account or Facebook page of a recently graduated high school student spending the week celebrating on the Gold Coast. Odds are it’ll be littered with an array of alcohol induced photos, party-hat donning emoticons and ‘OMG!! Last night was craaaazzzyyyy!’ status updates.

It’s certainly the case that many students will have made a mockery of themselves in the name of celebrating their supposed maturity found as a result of their recent high school graduation.

But it’s worth remembering that this is far from new phenomena.

All that’s changed is that it’s now out there for everyone to see.

Liam Quinn is a Bachelor of Journalism student at La Trobe University, currently on exchange at Michigan State University.  You can follow him on Twitter: @liamquinn23