Newspapers and magazines: A quick and easy way to develop a good rapport with a Melbourne white person is to chat about The Age. On no account should you actually admit to liking The Age. The whole point of reading The Age is to complain about it. Common topics of complaint are that The Age is going down-market and that you keep finding typos and grammatical errors in its pages.

If you really want to make it with a Melbourne white person, and even get romantically involved with him or her, tell them that you much prefer The Monthly over The Age. All Melbourne white people love The Monthly. What other magazine has given a platform to young and emerging writers such as Alice Pung, Robert Manne, Don Watson, Alice Pung, Clive James, Gideon Haigh, and Alice Pung?

Buying a subscription to The Monthly for the object of your affections is tantamount to expressing your undying love for them and saying that you intend to spend the rest of your life with this person. In no time at all, you will both have bought and renovated a federation period house in North Fitzroy and will spend your weekends reading The Monthly sipping a juice infused with wheatgrass and spirulina at a cafe with polished concrete walls and minimialist furniture.

Under no circumstances should a you admit to reading the Herald Sun. This is read by the wrong kind of Melbourne white person. If you do accidentally find yourself making a gaffe and saying ‘I saw this article in the Herald Sun‘, the only way to save yourself from ridicule by Melbourne white people is to immediately add the following qualification: ‘I happened to be in the dentist’s waiting room/cafe/on the bus and I saw it there and, well, there was nothing else to read’. If you fail to add this qualification, the Melbourne white person will be alarmed and end the conversation with you as quickly as possible.

Books: Melbourne white people have a fondness for books that is rivalled only by the citizens of particularly sophisticated and stylish European cities such as Paris or Berlin. What other city can claim the unique title of being named the second UNESCO City of Literature?

On every street in Melbourne, you will find booksellers. This may give the impression that purchasing books in Melbourne is a simple affair. Nothing could be further from the truth. In fact, there are only a few places where Melbourne white people purchase their books and there is a strict hierarchy of bookshops.

Top of the tree is Readings in Carlton. Some emphasis should be given here to Carlton, since Readings also has outlets in Hawthorn, Malvern, Port Melbourne and St Kilda. While Melbourne white people can technically purchase books at these locations, it is preferable to go to the Carlton store. The reason for this is that the Carlton store is located in Carlton. 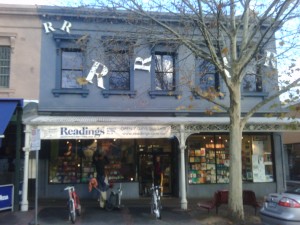 Where Melbourne White People buy their books: Readings in Carlton

If a book is not available at Readings, and it is needed immediately, Melbourne white people have the option of purchasing the book at the Brunswick Street Bookstore or the Paperback bookstore on Bourke Street. If these bookstores do not have the book in stock, Melbourne white people will return to Readings in Carlton to place an order for the book.

Stephanie: If invited to dinner by a Melbourne white person, it is a certainty that the recipe will come from Stephanie. If you go to a lot of parties thrown by Melbourne white people, you might form the impression that everyone in Melbourne has a kindly neighbour called Stephanie who hands out recipes over the back fence.

Dining out: Because Melbourne has so many restaurants and cafes, you may think that choosing a place to eat is easy. Nothing could be further from the truth. When selecting a place to dine in Melbourne you have a choice between Vue de Monde, MoVida, or a small dumpling house located in a hard-to-find laneway in Chinatown. The harder the dumpling house is to find, the better.

If you take the dumpling house option, resist the temptation to point out that the dumplings are stodgy fare, not unlike bad English cooking. Melbourne white people are convinced that food made by non-Anglo people is always better. There are no exceptions.

Resist the temptation to point out that equally or more spectacular landscapes can be easily found in Tasmania and the coast of NSW. Pointing this out will only offend the Melbourne white person. Simply nod, and agree that these places are indeed special.