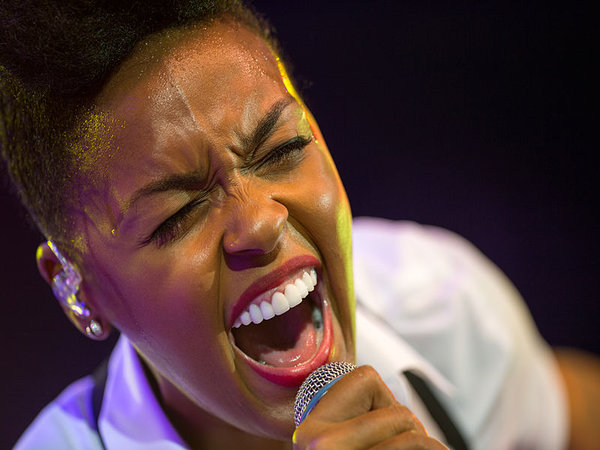 It only takes two minutes of Janelle Monae’s ‘The Electric Lady’ to instantly understand the reputation the fledgling songstress is establishing for herself.

Following an orchestral introduction, the album’s true opener, ‘Givin Em What They Love’, sees Monae boldly spouting quotes of superiority over a menacing bass line – assuring us all that “she’s on a mission to give you what you love”.

It’s a daring introduction that verges on arrogance, but it’s clear that Monae carries the natural certainty and swagger which is prevalent in many great musicians.

In fact, it’s a trait you’d find in some of the best musicians – the likes of Mick Jagger or Prince, whose style and sound are both obvious influences on Monae.

A minute and a half into the track, Prince himself features in a guest verse.

It’s been a long rise to prominence for Monae over the last decade. Her 2010 debut album ‘The ArchAndroid‘ found some success in the US, largely thanks to a Grammy nomination, constant rave reviews from critics, and the popularity of the single, ‘Tightrope’.

For those that don’t know, Monae assumes the alter-ego of Cindi Mayweather on record – an android on the run from the law for falling in love with a human. Hence, The Electric Lady title takes on a more literal meaning.

Still, Cindi is pretty damn soulful for an android.

The album’s lead single, ‘Q.U.E.E.N’, is a bombastic, synth-guided number that finds Monae and Erykah Badu confidently addressing their detractors.

They’re so self-assured you can’t help but wonder whether she really is an android – such is the veil of invincibility she establishes for herself.

Daring you to try and question her style, Monae playfully asks, “Am I a freak for getting down?”.

Later, she’s as topical as she can be, wondering, “Is it peculiar that she twerks in the mirror?”.

For Cindi? Not at all.

Throughout the majority of the album, Monae rightfully maintains this poised self-projection with ease, and she’s earned it.

Her self-professed perfectionism is apparent throughout the album. There’s always a little touch here or there, on almost every track, that makes it special.

Faint horns in the background of ‘Electric Lady’ add just the right amount of kick, for example, while the inclusion of a jazz guitar on ‘Ghetto Woman’ establishes a real Spanish samba vibe in the track where you’d least expect it.

However, the most poignant moments on the album arise when Monae chooses to let her guard down.

It’s a nice change of pace to question whether it’s Cindi Mayweather or Janelle Monae singing on a track.

‘Primetime’ is one such example, a crooning love ballad featuring RnB singer, Miguel, on vocals.

Monae impassionedly admits, “I know sometimes I’m mysterious…but tonight, I don’t wanna be mysterious with you.” It’s the sixth track on the album, but for the first time, Monae actually seems human and relatable.

The ease with which she manoeuvres between different styles is also worth noting.

Whether playfully singing away on ‘Dance Apocalyptic’, softly crooning on ‘Victory’ or rapping a verse at the end of ‘Q.U.E.E.N’ – Monae tackles each task with aplomb, as though she’s an established veteran to each genre.

With the voice Monae possesses, it’s hard to go wrong. Powerful one moment, tender the next; her vocals manage to emphasise whatever style she elects to undertake, and carries her through the few weaknesses in the music.

The Electric Lady is a chart-friendly, polished release from an artist  possessing boundless potential and a solid step in her pursuit of more commercial success.

Despite a number of prominent guest vocalists on the album, Monae is the star of this show, and will be for the foreseeable future.

Whether she maintains the Cindi Mayweather moniker into the future is another question, but for now, she’s just a robot releasing some of the best music we’ve heard all year.