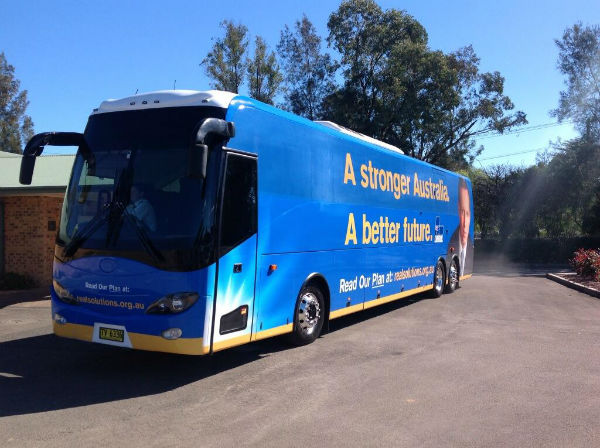 Kevin Rudd and Tony Abbott were back on the buses today, and for the first time this campaign, they both picked up Trail Wrap honours.

Again, today’s is more of a must look, but this gem is well worth bending the guidelines.

As the candidates are busy zipping about the country, The Guardian is keeping track of all the stops along the way.

We expect western Sydney to be unidentifiable under a cover of colour by the end of the trail.

Quote of the Day

“Unfortunately the former government – the current government, rather – they have taken $50 million which was from the proceeds of crime and they are putting it into general revenue.”

Thanks for making the search an easy one today, Tony.

When campaigning on the streets of Liverpool, the Opposition Leader was a little presumptuous, referring to the government posthumously.

Polls are suggesting the day will soon come, but Mr Abbott still has another three weeks to wait.

Over the course of the campaign, ABC 24 has carried a series of interview with a banner “via broadband” fastened across the bottom, which was again the case today with Kevin Rudd.

Unfortunately, the PM doesn’t appear to thrilled with the end product, presumedly lagging worse than an online game of NBA 2K13.

But, if we could be so blunt, it serves Mr Rudd right for holding a broadband presser when record numbers of us were busy downloading Breaking Bad.

When it comes to accounting for a certain quality of internet while uTorrent is in piracy overdrive, it’s best to tread lightly.

Today’s award goes to the Liberal candidate for Tom Zorich, who, in a debate with Labor MP Nick Champion, was unable to explain the Coalition’s Direct Action Plan.

For the record, here’s the plan explained on the Liberal Party’s website.