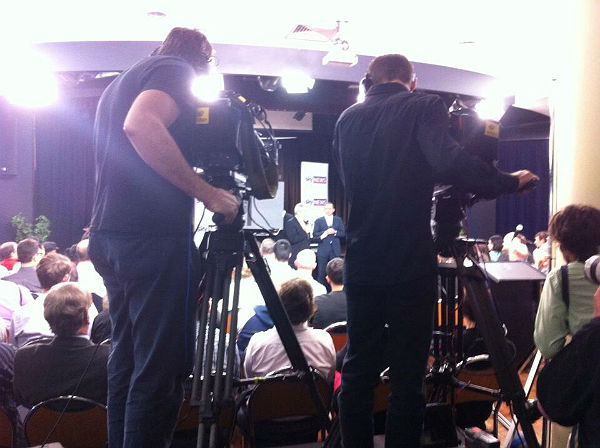 Given how boring the first debate was, we thought we wouldn’t live-blog the second one. And of course, it was more interesting because of that.

Kevin Rudd and Tony Abbott at the debate tonight – the view from the back #ausvotes #tennews pic.twitter.com/60UM667L4l

Kevin Rudd featured in a Medicare Local office in Brisbane, where he announced an extra $15 million for cancer care nurses.

It was all about the manufacturing industry, with new measures announced, including:

Be sure to check out cartoonist Michael Leuing’s great cartoon in The Age here.

In the people’s forum held in Brisbane, Tony Abbott acknowledged what we’d all been thinking.

“We’ve had a much better and more lively debate than the one we had in Canberra,” he said. “People one, journos nil.“

Here’s one way to announce or suggest policies on the run.

Good stuff from one Kevin Rudd.

in traffic on way to the second debate. It is time for Brisbane to build the Cross River Rail. KRudd

We were confused as to whether this would be a quote or slip of the day, but the award again goes to Abbott, and again from the debate.

The more he did, the more Abbott got frustrated, and finally came up with this beauty: “Does this guy ever shut up?!”

Best to keep the gloves up in these situations.

Wrap by Liam Quinn and Erdem Koç. Follow them and send them tips on Twitter – @Quinn_LP and@erdemkoc.