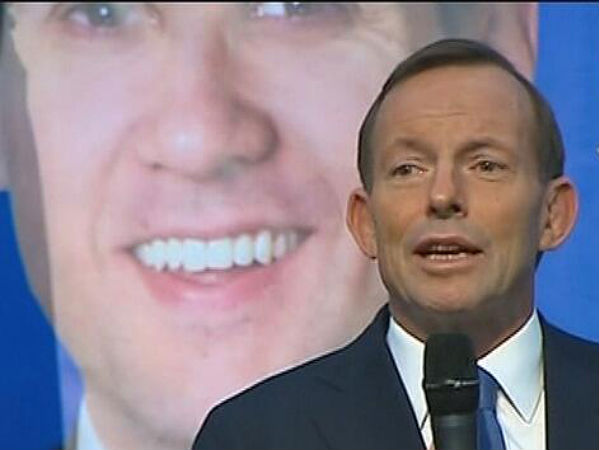 The Daily Telegraph’s front page said it all on the eighth day of the campaign. 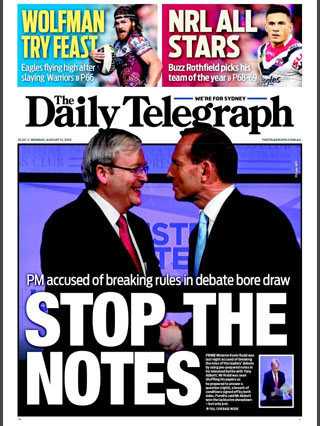 Mungo MacCallum has written a great piece analysing Sunday night’s debate, saying it had no passion and no real conviction – something we agree with.

Tony Abbott was quiet on the criticism Kevin Rudd faced for using notes in Sunday night’s debate – something which wasn’t allowed, but something apparently no one told the PM.

Abbott decided he wasn’t going to make the use of the notes too big of an issue, but instead attack its contents.

“The problem with the Prime Minister last night was not that he was reading from notes, it was more that the notes weren’t worth reading, that was the problem last night.”

KRudds fringe looks like its been welded on this morn. More hair spray than Dame Edna.#flickredundant #jealousmyhairproblemisntsoeasilyfixed

Rudd’s hair has sure received a lot of backlash this campaign, suggesting that we as a nation are capable of making petty remarks about the appearance of both genders, thank you very much.

Dutton’s tweet really has it all: comical imagery, pop-culture reference, self-deprecatory hashtag. Not everyone appreciated his digital wordsmithery though.

– Do you have a health policy yet @PeterDutton_MP – @SimonBanksHB
– Is that your main concern as Shadow Health Minister? Wow! – @TheKouk

But, I would like to say, on behalf of people who have to trawl through a feed of dry policy snippets and sausage sizzle observations, thank you Mr. Dutton.

Christopher Pyne takes out of “Slip of the Day” honours on Day Eight, for a somewhat laughable comparison he attempted to draw between the current government and another nation.

During ABC’s QandA, Pyne compared Kevin Rudd’s Australia to North Korea, resulting in the live audience cackling away at the link.

This one might’ve been a bridge too far, Chris.