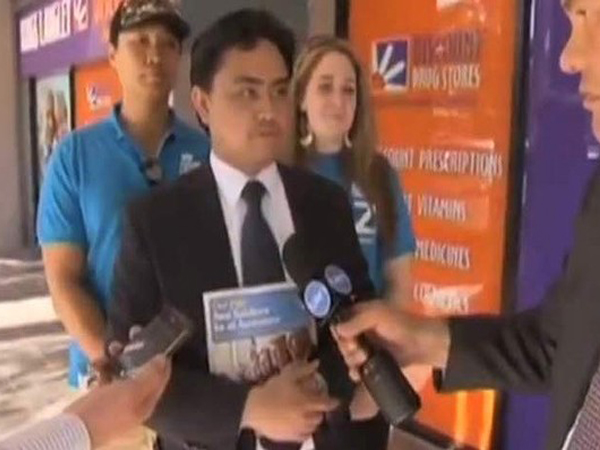 Most of day two was around the RBA’s decision to cut interest rates by 25, basis points – something welcome by both major parties.

What the polls say

What’s the old saying? Something about a picture being worth oh so many words.

With the abovementioned well-trodden cliche in mind, our “Must Read” of the day is really a “Must Look.”

Fairfax’s possess some of the very finest political cartoonists, and you can see what they’ve produced in the early days of the campaign in one handy slideshow.

Check it out here.

“I think he’s made it fairly clear through one of his editors the other day that he doesn’t really like us.”

– Kevin Rudd, talking about Rupert Murdoch, referring to the headline of The Daily Telegraph which featured in yesterday’s wrap.

Tweet of the day goes to West Australian Labor Senator, Louise Pratt, mainly for top use of hashtag. Ha, #noalition, good one Louise.

One of the chest-beater points K-Rudd has raised during his Brisbane jaunt is plans for transport and infrastructure expansion in the city. Rudd claimed in debates today that the multi-billion dollar plans for a new rail system would buckle under Campbell Newman’s LNP reign.

With 3962 Twitter followers, Louise Pratt doesn’t cause the Twitter feather ruffle that some of her fellow MPs do. But she linked K-Rudd and Albo in there for back up, just in case.

Pratt gets extra points for her ballsy Twitter bio. She proudly declares herself a ‘lefty, feminist’, which are pretty brave things for a Labor senator to admit. She also added ‘& Fremantle Dockers supporter,’ for good measure.

Today’s slip goes to the Liberal Party candidate for Greenway, Jaymes Diaz.  He told Channel Ten reporter John Hill that the Coalition had a six-point plan for “stopping the boats”. Except,  he couldn’t outline what the six-point plan was.  He couldn’t even name one of the points.

Tony Abbott defended the “good young fella” on radio later in the day, saying everyone slips up from time to time.

The video has gone viral and made news in the US, where The Huffington Post compared it to Rick Perry’s “oops” in the 2012 presidential campaign debate.

Here’s Mr Diaz’s few seconds of fame, and in case you want to know the Coalition’s six-point plan, you can read this.