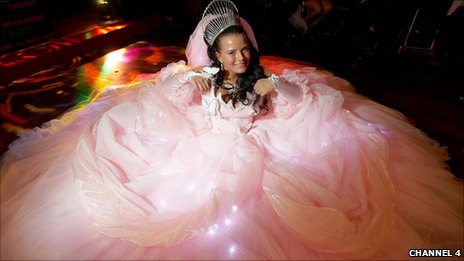 While Nicki Minaj is not known to be subtle in her attire, this outfit topped all others with its shock value. Rather than wearing very little, Minaj instead covered up in a red silk Versace cape complete with red satin gloves and her very own mock pope. This ‘Gaga-esque’ outfit saw her criticised for trying to rip off either Little Red Riding Hood or the Da Vinci Code. Either way it caused a stir.

When Angelina Jolie posed for photos at the 2012 Oscars, little did she know that her right leg protruding from the exceedingly high split in her black velvet Versace gown would become the talk of town. Comedians and talkback radio hosts continued for weeks to mock the blatantly visible leg (it even got its own twitter account), leading her to become the butt of many jokes and eventually justify her choice of outfit.

The premier of The Hunger Games was highly anticipated for avid fans, but even more so for the eleven designers In Style magazine coordinated to anticipate the design of Katniss Everdeen‘s most famous outfit, the ‘Girl Who Was On Fire’ dress. The dress was possibly more epic than any designer predicted and did not disappoint fans. The movie is highly deserved of a watch simply for this dress. 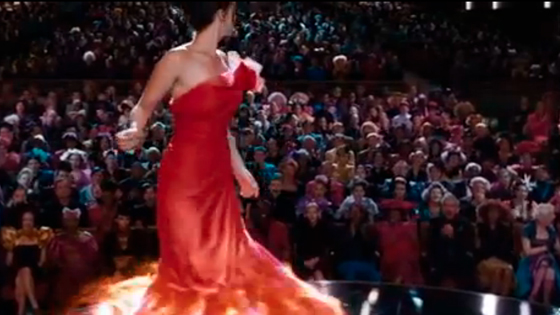 Be it a school excursion, a scout group or a lawn bowling trip, the Australian Olympic uniform certainly gained a mixed reaction. The Sportscraft designed smart blazers, pencil skirts/shorts and shirts soon gained the public’s acceptance as a ‘400-strong squad of lawn bowlers’. Luckily the custom designed Dunlop volleys saved the team from utter criticism and added a little youth to the predominately ‘grandparent era’ attire.

Gossip Girl‘s Serena van der Woodsen aka Blake Lively definitely knows how to keep a secret and her real-life wedding was no different. Leading up to the wedding, many guesses were made regarding to who would design her gown; but in the end the dress was Marchesa. While it was elaborately laced with custom crystal and rose gold, it had a lot to live up to given it was accessorised with a two-million dollar ring.

With the TV series My Bedazzled Life to go by, how could Brynne Edelsten possibly go unnoticed at the AFL Brownlow Medal. Her Xen-designed dress constructed of broken mirrors and a black feather tutu she says was an amalgamation of a mirror ball, Barbie and The Black Swan. A rather strange concoction that sadly only she thinks she mastered, with both Take 40 and The Hot Hits voting her as the worst dressed with a 1/10.

There is no other way to describe it than ‘that dress’. If you have ever watched My Big Fat Gypsy Wedding then you will know exactly what I’m talking about. Non-traveller Sam Norton got married in a dress that weighed 89kgs (more than her father), had 21 under layers, lit up, had moving diamante butterflies and surprisingly enough was a fire hazard. If that doesn’t classify it as ‘that dress’ then nothing does.

Nicole Kidman graced the Melbourne spring races in a clear imitation of Audrey Hepburn’s character, Eliza Doolittle‘s infamous dress from the 1964 classic My Fair Lady. This L’Wren Scott dress was almost a direct replica sporting the same black and white striped detailing, though instead skimming just below the knee. Questioned on her outfit, Kidman quoted My Fair Lady as one of her favourite movies, hence the choice of dress.

2. Another election, not another dress: Michelle Obama on victory night, 7 November.

Michelle Obama has been praised for outfit-repeating, a rare lifestyle choice among the rich and famous. The Michael Kors dress she wore when her husband, Barrack, was re-elected as president was the same dress she wore to the Medal of Honour Ceremony in November of 2010 and again to a gala event in 2009. Good on the first lady for supporting sustainable fashion.

This year’s Victoria’s Secret Fashion Show has been deemed the most outrageous ever. The show saw more feathers and sequins than ever before. And it wasn’t just the variety of outfits that shocked the crowd; it was the sheer size of them. The catwalk showcased wings bigger than the models themselves and feathered headpieces that dragged like bridal veils. It’s hard to imagine next year’s show becoming any more intense, but miraculously it always does.

Hannah Rabe is a Bachelor of Journalismstudent at La Trobe University. You can follow her on Twitter: @hannahrabe1