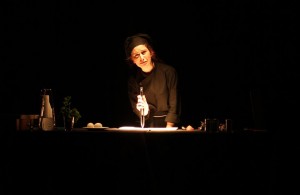 This play is indeed, to quote from Shakespeare himself, a tale told by an idiot.  A self-proclaimed idiot, that is.

Simge Günsan is an Australian-born actress of Turkish origin.  Following a three-year stint with a community theatre group in Melbourne, she moved to Istanbul to turn her passion in acting into a full-time career.

She graduated from a private college – one of the best in Turkey – and developed Macbeth Mutfakta (or Macbeth in the Kitchen) while continuing to work with istanbulimpro, an improvisational theatre group.

Having worked with Simge in the past, I knew she was…crazy, for lack of a better word.  And so when she decided to perform, as a one-off, her one-person adaptation of Shakespeare’s Macbeth in Melbourne, I can’t say I was surprised in the least.

Simge has performed the play, directed by Burak Tamdoğan, in Turkish for the past year in Istanbul.  The English translation of it was for the benefit of her Melbourne audience at La Mama.

The setting of the play was the kitchen.  The characters were the utensils and ingredients used in preparing the Turkish dish menemen, a traditional omelette.  Macbeth was a large knife, more appropriate for cutting meat, and his Lady a spatula.  The witches were the salt and pepper shakers, King Duncan a tomato, Banquo a large fork and so on.  You get the picture.

Throughout the play, Simge switches between explaining the flow of the story while preparing the dish, and the dialogues between the objects which have been adapted from the original text.

One of my favourite moments was when Banquo’s ghost, a plastic fork, haunts Macbeth, the large knife.  It was a clever way to illustrate what would otherwise have been a difficult scene to convey using utensils.  The applause from the crowd indicated that I wasn’t the only one who acknowledged the creativity here.

Simge used her voice extremely well to portray the different characters, and constantly moved around the kitchen table while illustrating various points.  Another funny moment was when she announced the arrival of Hekate, the queen of the Three Witches, which was a bunch of spring onions.  Simge placed the onions on her head, while speaking as Hekate in character, all to the tune of original music cleverly composed by Evren Gülseven.

I’m usually quite traditional when it comes to how I think classical theatre should be produced.  Simge’s play proves that abstract thinking when producing one of the all time greatest Shakespearean classics can be an enjoyable experience, both for the actor and the audience.

The final moment in the play, when Simge announces that the dish is ready to be served, builds a unique communal bond among the audience, which is quite rare in contemporary theatre.

And the taste, I might add, was just as good as the play.