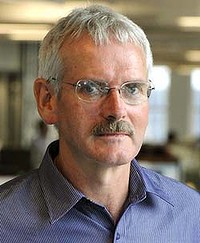 After completing his degree and travelling, Tom Hyland got his start in journalism working for a regional newspaper in Mt Isa, Qld in 1979.

His foray into the profession got off to a rocky start. Hyland wryly admits, ‘my first front page story was completely wrong, completely inaccurate and an embarrassing lesson to learn.’

Nevertheless, Hyland quickly learnt that lesson and his career has since taken him to South-East Asia and beyond, working for esteemed news organisations, Australian Associated Press (AAP), the BBC World Service, Radio Australia and The Age.

Why did you pursue a career in journalism?

I met a journalist when I was 15 years old and I thought the job seemed pretty cool.

The detached, sceptical aura that journalists cultivate appealed to me. I also liked the idea of being a witness to interesting, important events and then telling a story.

How has the mechanics of journalism changed since you got into the profession?

It has changed very rapidly in a very short time. I started on a typewriter in 1979 and six months later the newsroom was computerised. Back in those days you would go to a librarian for background information but now there is a mass of data available on the Internet. I sometimes think this is cumbersome because you often spend a lot of time aimlessly wandering cyber space. However generally it is a good thing because the masses of information available allow you to write with greater depth.

How has this changed the culture of news?

The hungry beast that is the 24/7 news cycle is becoming pervasive and potentially degrades the quality of journalism. Journalists have always reacted to news events and followed the daily news agenda, but we also used to have more time to connect the dots to find out what is going on behind a story. The need for instant commentary and analysis dictated by the Internet doesn’t allow journalists this luxury, consequently news is now something that happens rather than something you dug up or found out yourself.

Where has your career taken you?

After working for newspapers in Mt Isa and Cairns and then for AAP in Sydney, my first overseas job was for the BBC World Service in London, which was like dying and going to journalistic heaven. I was working as a sub in the newsroom and they had a very thorough, old fashioned, rigorous process of doing things. I then returned to Melbourne for five years before being posted to Jakarta in 1989 as AAP’s South-East Asia correspondent. Although I was based in Indonesia, I covered a lot of stories throughout the region so I travelled to Cambodia, Brunei, Vietnam, India, Pakistan and the Philippines. After my posting in Jakarta came to an end, I returned to Australia where I have been based since except for a brief posting back in Jakarta in 2001.

What was it like working as a foreign journalist in Indonesia under the Soeharto regime?

It was a very intense, stressful and stimulating experience. There were no Australian journalists there apart from me because AAP was the only Australian news organisation accredited with the Indonesian government. Having to operate independently was hard going, but I also had great freedom. My editors back in Sydney left me alone and I probably had a call from them once, maybe twice suggesting stories the entire time I was there. Getting the stories was the trickiest part because people wouldn’t speak to the media. You also had hanging over your head the risk of getting your visa cancelled if you were overly critical of the regime.

Was there camaraderie amongst the small group of journalists?

Yes, but I also had no competitors, so I largely had stories for the Australian audience to myself. There was some competition among the wire services, but internationally Jakarta was mostly seen as a bit of a backwater posting so there wasn’t too much competition. I remember in 1989 there was the massive build-up of expectation around the Tiananmen Square protests in Beijing and some of the foreign journalists in Jakarta were almost crying into their beer, lamenting the fact they didn’t have a story like that to cover.

What was most significant story you covered while in Indonesia?

It was, historically, a pretty quiet time. During my last eight months or so I focused heavily on East Timor because there was this general feeling that it was going to go off, and it seemed most reporters weren’t covering it. It’s a really perverse thing to say but unfortunately I came home three months before the massacre at Santa Cruz in Dili, so I never got to cover an event that transformed that story. The other big issue I covered was the attempt to forge a peace settlement in Cambodia because a lot of the negotiations were held in Jakarta.

You returned to Indonesia in 2001, what differences in the media did you notice post-Soeharto?

What really struck me was the great flourishing of debate. The media was very chaotic and almost rabid. The enthusiasm of the people to tell their story also struck me; they were still revelling in the blossoming of democracy. This was wonderful to see after the stultifying Soeharto era.

Has the way newspapers gather international news changed at all?

My colleagues and I are working on a project about Asia at the moment and we were joking that in the past we would have booked tickets to the various locales to research our story, but because of the economics of the newspaper business we now do our research on the Internet and get the correspondents to feed into it. There is now a mass of material available – foreign correspondents are no longer the privileged ‘experts’. Newspaper head offices are now full of people who think they are ‘experts’ because they’ve seen something on the net. The irony is that while the Internet allows you to research your topic in great detail, in some ways it is also quality journalism’s biggest threat.

Reflecting on your career thus far, is there anything you would have done differently?

In hindsight I wish I hadn’t missed the stories that I now know I missed; I would have stayed in Indonesia longer; I wish I’d had more confidence to trust my instincts and leapt onto stories, when at times I was too cautious and careful.

Dean Casey is a Master of Global Communications and International Business student at La Trobe University. You can follow him on Twitter: @deancasey