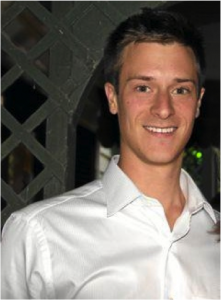 Watching televised news in his parents’ lounge room as a child, Tom Maclean knew broadcast journalism was a world he wanted to be part of.

In order to fulfil that dream he began a Bachelor of Media Studies at La Trobe University in 2007. In 2009, he moved to the United States, completing a 12-month exchange program in broadcast journalism at the University of Missouri, the oldest formal journalism school in the world.

It was experience he found ‘invaluable.’ Working as a reporter at Missouri’s KOMU TV, the only university-owned commercial television station in the United States, his passion for the broadcast medium was only to increase. He currently works as a broadcast journalist at Win News Albury Wodonga.

What inspired you to pursue a career in journalism?

As a child, watching the news on the television was what first sparked my interest; I was really intrigued by that world. But it wasn’t until during my year 12 English and media studies that I began to seriously think, ‘this is something I could actually do.’ After leaving school I pursued media studies at La Trobe, and was drawn to the medium of television because it is so hands on.  You have to go to the location of the story, see things happen directly, and meet the people behind the news. When I began studies at the University of Missouri, I realised just how much travel and adventure there is to be found in journalism, and that really increased my desire to be a part of the industry.

How did you find work after university?

To an extent, I’d say I got lucky. I had just returned from the US and had started to look around for work, thinking my best chance would be casual work, filling in for journalists on annual leave.

I gave my resume to Steven Marshall, director of news at Win Television Victoria. Although I had originally enquired about casual work, he said, ‘we actually have an opening for a permanent position, do you want to come along and interview for it?’ I got a call back about three days later, and had to start almost immediately. I had a week to pack up my life in Melbourne, and move to Albury.

That’s the thing with many of these jobs; you just have to be willing to take them when they come up and you need to be adaptable. If they ask, ‘Are you willing to move?’ you say ‘Yes.’ If they say, ‘Can you do this’ and you can’t, you say, ‘I’ll learn.’ If they say ‘Can you change this?’ you say, ‘Yes, yes, yes!’ You have to be flexible.

Coming from Melbourne to Albury, the lifestyle change must have been quite radical. How did you adapt?

I’ve been in Albury for ten months now and I still have a lot to learn about the area. Before I got this job, I’d only ever driven through Albury on the way to Sydney. I basically parachuted into this regional town where I didn’t know the politics, the culture or any of the community’s prominent figures, and yet my job was to put the local news into context for the public. I’m starting to get my head around it, but it’s still a challenge. I’ve found it helpful to really try and immerse myself in the community.

What does a typical workday at Win News entail for you?

I start at 8.30. I’ll hopefully come in with some ideas for stories for the day already formed. When we arrive, we go through emails and check the newspapers to see what they are running. Then we do police rounds, calling up the regional police stations and highway patrol to see if they’ve had anything happen overnight. We’ll also check the fire stations. Usually the rounds will bring up a story.

At 9.15 we have a state-wide conference call with the other news bureaus around Victoria. We compare stories and discuss our plans for the day. By about 10 am, hopefully you’ve worked out what to do for the day, through calls and follow ups, and then everyone heads out for the day, in journalist and cameraman teams.

We return to the office at 2 or 3 pm with our stories and begin furiously writing everything up. You have to get it done as quickly as you can. Everything gets sent to a subeditor in Ballarat; they fix up your verbal spaghetti, check your facts and figures, ask you about your sources and try to determine whether you could back up your content in court if need be.

I finish at 5 pm, which is when I’m supposed to have my final voiceover completed, so the cameraman can put everything together. Generally everything has to be written by five, ready to be sent to Ballarat, but we can still be working on the stories up until about 6.15 pm. However, once it gets to that time people tend to start screaming at each other, so we try to get everything done by quarter to six to limit the stress.

What are some of the biggest challenges you face in your line of work?

You never come into the office expecting to spend the day working on just one story. Each day you do two packages—those are the more in depth pieces—and up to six ‘reader voice overs,’ which the newsreader will simply read to camera.

The challenge there is that you are working at such speed, that often you have to be willing to just accept that your work may only be 80 per cent as good as you’d like it to be. You just haven’t got the time to make it perfect. I find that to be one of the hardest things. For example, I might think, ‘I’m not happy with this story because I didn’t have time to get all the interviews I wanted.’ But, you have to get it in on the deadline because you have ten other things to do. You do your best with it, and then you have to move on.

I did struggle with it at first, but it quickly becomes a challenge to see how fast you can be. It is sad that sometimes you have to sacrifice quality, but it can also be really satisfying when we’re breaking stories, meeting deadlines and still managing to produce quality content.

How much freedom do you have to pursue the stories that you feel passionately about telling?

You can’t have any airy-fairy dreams about pursuing your ideological aspirations. You’re working for a commercial organisation, and yes, they want to support the community, but primarily it’s about making money. You can still have those ideals, and work towards them, and end up being Tony Jones, but you have to understand that before you will be valued for your ideals, you have to be an asset to a business; you have to be able to help them pull the ratings. I struggled with that at the start. However, that being said you can still do really thoughtful, considered stories, but you do have to understand the limitations of the medium and the organisation.

Alyce Hogg is studying a Bachelor of Journalism with Honours. You can follow her on Twitter: @alycehogg.