Channel Ten has had a rough year. 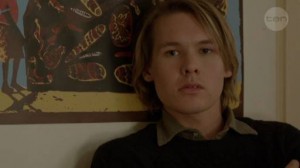 Across its digital spectrum, the broadcaster has received both high amounts of attention and criticism for airing pseudo reality series such as Being Lara Bingle and The Shire.  After a string of ratings duds went to air over the last few months that saw Tens former chief of programming, David Mott, step down from the position in late August, it seemed that Ten was in a very dire situation indeed. Seriously.

Ten has since launched a new slogan, ‘Take a Fresh Look’, in an attempt to ask viewers for a second chance. The critical success of the eight part television adaption of Puberty Blues could be the renaissance that Ten is looking for; viewers reacted positively to a well-crafted, locally made drama.

Cue Underground: The Julian Assange Story, a two-hour biopic that went to air on Ten last night. Underground traces the origins of a young Assange, well before he received worldwide notoriety as the founder and face of Wikileaks, back when he was a teenage computer hacker.

Everyone has an opinion on Assange. Whether you think he is a hero or a villain, he is certainly a person that sets tongues wagging, and the intrigue surrounding him was ripe for the picking. Ten’s choice to air Underground was a clever way of capitalising on Assange’s intrigue after he recently made international news (yet again) when he was granted asylum in the Ecuadorian embassy in London, despite international pressure to have him extradited to Sweden.

The payoff for the viewer, and for Ten, was well worth the weeks of endless spruiking and promoting as it seemed that Gary Jules’s Mad World was playing on repeat in my living room.

Like Puberty Blues, Ten’s investment in Australian drama with a high production value was a smart move. Experiencing the streets of Melbourne during the late ‘80s and early ‘90s connected the audience with the familiar; it was a refreshing change to see students in Brunswick wearing double denim back in an era before double denim was worn ironically.

Similarly, a fresh whiff of nostalgia proved to be a winner, with the old fashioned dial-up modem sound throwing many of us back into a simpler time when the internet was slow, and computers resembled R2D2. The dial up modem noise subsequently received a lot of Twitter love.

Strong performances from the main cast cemented Underground as one of the highlights of free-to-air television in 2012. Looking disconcertingly like Julian Assange, Alex Williams’s portrayal of the Wikileaks founder was strong and believable, as a young man struggling with his past, his values and his responsibilities. Anthony LaPaglia’s turn as the scruffy Detective Ken Roberts was equally strong.

The real standout, however, was the ever reliable Rachel Griffiths’s depiction of Christine Assange. Griffiths brought a sympathy to Christine as woman who simply wants to protect her family, and as a mother who’s struggling to instil morals and values into her brilliant and unpredictable son.

What was most interesting about Underground was the way in which the writing wove Assange’s past into his present, and attempted to draw parallels between what happened to him as a young man and the ethos and mission of Wikileaks today. By emphasising his ‘look but don’t touch’ approach to looking through concealed information during his days as part of a group of hackers known as The International Subservives, Underground shone a very positive light on the young Assange. The portrayal was of an ethical hacker and a whistleblower, not an anarchist or a criminal.

This arguably sympathetic representation of Assange  could alienate as many of his critics as it could be celebrated by his supporters. The grey area that Assange often occupies in the media as somewhere between a criminal and a hero is, of course, a strong selling point for airing Underground. The favourable light in which the biopic shone on the protagonist is both a strength and weakness, as clearly this was a dramatisation and should not be construed as the entire truth.

Still, Underground has proved to be the perfect antidote to Ten’s poisonously vapid broadcasting schedule. With a slew of strong locals dramas being produced and aired across not only Ten, but the other free-to-air channels as well, there is light at the end of the tunnel of endless rehashes of reality shows and bad foreign sit coms.

Laura Hurley is a third-year Bachelor of Journalism student at La Trobe University and is the current editor of upstart. You can follow her on Twitter: @laurajanehurley