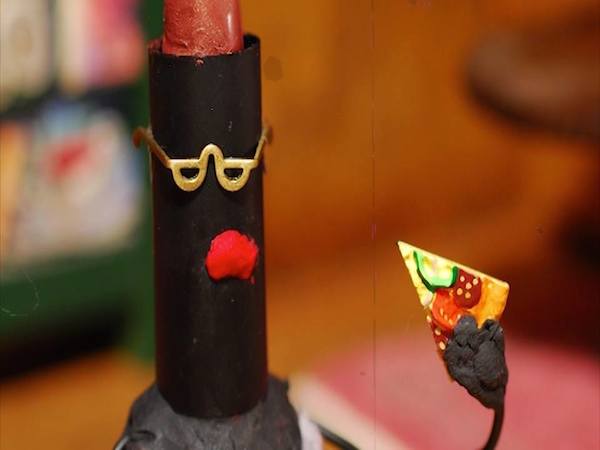 A short-film career that started down the most unlikely of avenues in Boca Raton, California using just a stop motion iPhone application and craft supplies is one now, with obvious potential for great success.

That was how Carolyn Duchene, just 16 years of age at the time, discovered her passion for filmmaking and stop motion animation in particular, on a trip to the USA to visit her grandmother.

Duchene has since invested in a DSLR camera and upgraded from a phone application to an editing program for her MacBook Pro to further her skills, and is really beginning to achieve things and going to all the right places.

The first film she shot off her iPhone was for the ATOM/IPAF My Story My Content Short Film Competition, it won first prize at the 2013 awards in Melbourne.

This film was a catalyst for inspiration for Duchene, who then began work on her next big idea, Wanda – a film about the dreams of a roll of red lipstick. 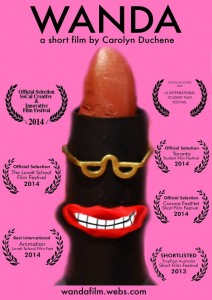 “Wanda originated from my desire to make a stop-motion film out of everyday objects,” Duchene tells upstart.

“Since red lipstick is something I wear everyday, it had me thinking abstractly of what sort of lives abandoned beauty products would lead.”

Despite Wanda being one of her first projects using her new Dragonframe software, and therefore largely an experiment, the abandoned beauty product has certainly found a home within the eyes of short-film judges around the world.

In a little over a year, Wanda has achieved success on global scale. After being shortlisted at Australia’s 2013 Tropfest, Duchene submitted the film to festivals in Europe and North America.

Speaking from France at the 67th Cannes Film Festival as part of a filmmaking internship with American Pavilion, Duchene says she never expected Wanda to achieve such great things.

“Honestly I had no idea it would achieve such success,” Duchene says.

“I created the film in less than a month for an educational experience in the art of stop motion animation – when Tropfest called to say I had been shortlisted I was thrilled and very surprised.”

Despite Wanda’s success, it took a lot of persistence from Duchene to stay positive to begin with.

“At first I received many rejection letters. I truly didn’t expect anything to come from (distributing Wanda internationally) it but about three months after a string of rejection letters I started to receive lots of positive news,” she says.

“This was so exciting! I began to feel more positive about my film and marketing it to a wider audience.”

Duchene continued to note that whilst young talent in the film industry is in abundance, it is notably more difficult for young filmmakers to get noticed and create a successful film.

With her name now around the globe following the success of Wanda and an internship in Cannes, more travel to more festivals before living and working in New York is on the agenda for the Adelaide University Bachelor of Media student.

Duchene will be on exchange in Toronto before predicting to finish her degree in 2016, another short film project is on the cards and one could safely expect to see Carolyn Duchene’s name up in lights at more short film festivals in the near future.

“I can see myself working on features one day, but for now I am happy to stick to the wonderful world of shorts.”

Luke Sale is a third-year Bachelor of Journalism (Sport) student at La Trobe University and is a staff writer for upstart. You can follow him on Twitter: @lukesale1.