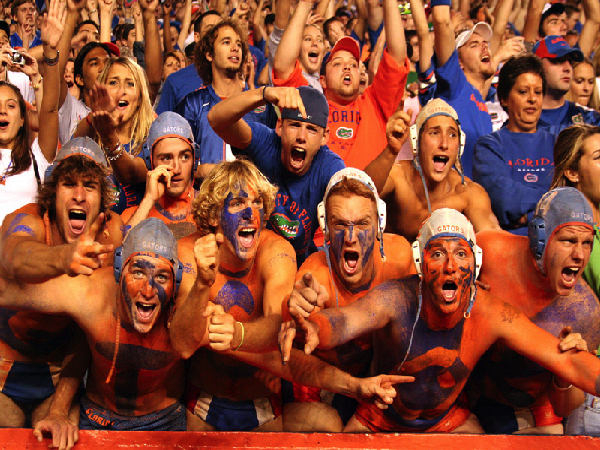 A family dressed head-to-toe in black and gold rounds the corner of Campus Bar and Grill on a sunny spring afternoon in Columbia, Missouri.

A small girl waves a foam tiger paw, while her mother sports a tiger tail which trails along the ground behind her.

The US college town is home to the University of Missouri, where the institutions team colours plague city streets.

In most American universities, school spirit is a big part of student and faculty life. Wardrobes and houses are full of logo-covered apparel, season tickets are purchased for college sports, and there’s a strong feeling of camaraderie across campus.

“School spirit at MU is ridiculously strong,” Jared Day, a journalism student at the University of Missouri, tells upstart.

“[One time] I was on campus at age 13 and a guy ran by in his undies and was painted up with stripes.”

The on-campus Mizzou Store is just one of many places across town where students, family and faculty can stock up on university gear with everything from blankets and baseball caps to stationary and shot glasses. Clothing sizes start at infants and new-design Mizzou ‘mom’, ‘dad’ and ‘grandparent’ shirts are available each season.

Football and basketball games are crawling with die-hard tiger fans, with sports enthusiasts screaming the school chant throughout matches.

Day says supporting your school is important as “they represent you in the world”, but that students need not “be a raving sports fan and go to every game to do that”.

“’Tiger pride’ means to embody the sense of togetherness and Mizzou-ness,” he says. “To be proud of your school, yours and your fellow students accomplishments, and accepting everyone for who they are and extending friendship to everyone you meet on campus.” 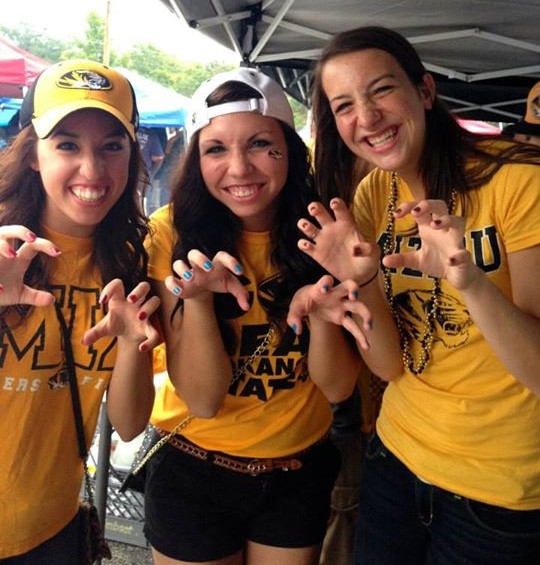 Back home, except for a handful of students wearing hoodies with their university’s name blazoned across the front, school spirit is a little trickier to spot.

Gavin Reid, a professor of bio-analytical chemistry at the University of Melbourne, returned in June this year from a 10-year stint teaching at Michigan State University in the US. He laughs when asked to compare the out-and-proud style of American college students to the more subtle Aussies.

“I got my PhD here at Melbourne uni, so I’m very proud [of the university]. Am I going to go around singing the school song? Probably not,” says Reid.

“Here it’s probably exemplified more maybe in the future, when people donate back to the school and things like that. There’s certainly not an obvious sense of school pride at universities in Australia,”

Reid says he thinks the culture difference between the two nations is the reason Australian students don’t paint the town in their university colours the way American students do.

“Australians are very much understated,” he says. “The whole [US] culture is about self-promotion and pride and all of that.”

“I think our pride in our institutions there and here is probably the same,” he says.

“It’s how much we then go about telling other people about it. I don’t think there’s anything wrong with [the difference].”

Deakin University student Jessica Allen says she thinks school spirit at her institution is expressed through a feeling of community on campus among both students and faculty.

“We have a really big student association here that provides not only things like study support, but also a huge array student activities aimed at getting everyone involved in the community spirit and social side of going to university,” says Allen.

“It’s a real theme here, through class Facebook pages, study groups, interactive lectures and the online discussion boards [CloudDeakin], there’s a real sense of ‘we’re in this together’.”

Allen says university hoodies, like Mizzou clothing, is commonly worn on campus at Deakin too. She and her cohort of dance students have even raised money to have specialised jumpers made for those involved in the end-of-year dance performance.

It’s true — a generically-dressed La Trobe student is much harder to spot in Melbourne’s CBD than a Mizzou tiger on the streets of Columbia — but school spirit cannot be measured solely by the number of logo-adorned hoodies hanging in students’ wardrobes. It’s measured by the life long friends you make in your peers, by the engaging content provided by your lecturers, and by the fact that despite complaining about driving to uni — you still do.

While the overt style of expression seen in US universities is lacking in Australia, this is not a reflection of how proud Aussie students are of the institution they attend, it is simply a reflection of different cultures.

Rikki-Lee Burley is a second-year Bachelor of Journalism student at La Trobe University who spent a semester on exchange at the University of Missouri. You can read more of her work on her blog and follow her on Twitter: @RikkiLeeBurley.