The most romantic moment in a woman’s life is when she is proposed to. Whether it’s a candlelit dinner, a horse-drawn carriage or something else, it’s the sweetest gesture anyone can make. 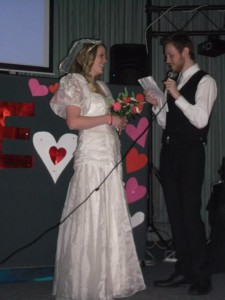 If you were lucky enough to have been at La Trobe Univeristy’s Agora on Tuesday the 14th, around lunchtime, you would’ve been witness to probably one of the most romantic marriage proposals of all time.

I am sorry though to be the one to burst your bubble ladies but the whole thing was staged.

When I got to uni on Wednesday, I had so many people ask me if I’d seen it, how cute it was and how they can’t believe how much effort the boy had put in. When I finally stumbled across the video on YouTube, I was shocked to recognise the ‘groom’. I actually knew him. He lived at Glenn College and would definitely not be getting married.

‘At Glenn we are having an event called Love Week, where basically anyone can propose to anyone and film it. Then the couple with the best proposal gets married in a mock wedding at college,’ says Paddy Naughtin, the groom-to-be.

Paddy and the ‘love of his life’ Eloise had planned to do a flash mob in order to win the competition.

The first flash mobs were created in Manhattan in 2003, by Bill Wasik, who was the senior editor of Harper’s Magazine at the time. Since then, flash mobs have become fairly popular in TV and movies. Oprah’s 24th season opening episode included a flash mob of more then 20, 000 people and has reached over 8 million views on YouTube.

Eloise and Paddy had high hopes for their flash mob but were overwhelmed by the reaction of students.

‘It was a really surreal experience being surrounded by so many strangers cheering and smiling so much for you,’  Eloise says.

The YouTube video was released soon after the proposal.

‘I think it has almost reached 5,000 views already,’ says Paddy. ‘Both Eloise and I have been getting messages about it from so many people.’

Paddy and Eloise had five cameras surrounding the Agora to capture their special moment and even managed to receive extra footage from passers-by.

The two put on the performance of their lives, ending the proposal with a very convincing celebratory kiss. But sadly the two love birds are not even close to dating.

‘We’re just a couple of mates who decided to really commit ourselves to the video,’  Paddy says.

With the competition at Glenn coming to an end, the couple waited until the few last days to unleash their elaborate proposal.

‘Eloise made the choreography and sign about two weeks ago, and we’ve had a few rehearsals between then and Tuesday,’ Paddy says.

‘While the dancing and the actual proposal were pretty well rehearsed, almost everything else came together pretty well with all of an hour’s preparation that morning,’ Eloise says.

La Trobe Stalker Space (a Facebook group) exploded moments after the proposal with comments like: ‘That marriage proposal in the Agora was the cutest thing ever!’, ‘why does everything cool happen when I don’t go to uni?’ and ‘I wish the happy couple the very best!’

Paddy’s dream of being the centre of attention on Stalker Space had been achieved and he and Eloise furthered the charade by changing their relationship status on Facebook from single to engaged.

But their job still wasn’t done. After being announced as the winners of the Love Week, the two were to be wed on Thursday night. Donned in their finest attire with the whole of Glenn as their witnesses, the two were married at Glenn followed by a classy reception at Eagle Bar.

So there you have it, the most romantic thing to ever happen at La Trobe and it was all a charade.

But to the one that is going to propose to Eloise for real, I feel sorry for you.