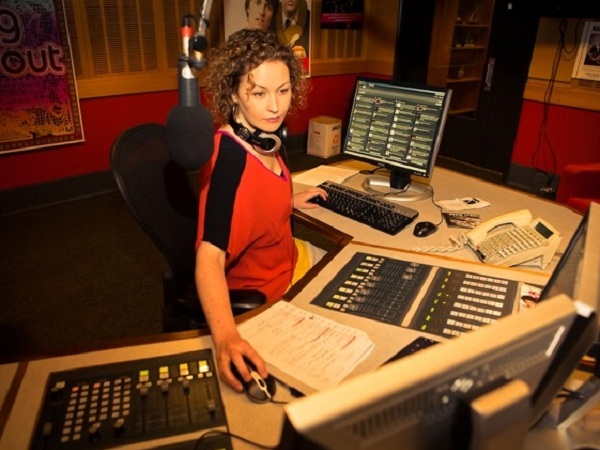 After more than a decade of hosting shows for Triple J, Triple R and SYN FM, Zan Rowe now has one of the most recognisable voices on Australian radio.

Despite her initial ambitions to become a journalist, Melbourne-born Rowe has always had an affection for radio broadcast.

Beginning as a founding volunteer of student network SYN FM, she soon became a host on community station Triple R, where she presented the Monday night drive program Transit Lounge.

In 2005, she made the jump to Triple J as a host of their weekend program, producing content for selected shows such as Home and Hosed and 2005 – the new releases program hosted by station director, Richard Kingsmill.

Rowe got her big opportunity in 2007 when she was offered the chance to host the Triple J morning slot from 9-12 on weekdays. Rowe has held the job ever since and her show has become an essential for thousands of devoted listeners every day.

You’ve spent a great deal of your life involved in radio, between SYN, Triple R and Triple J. Did you always imagine it would become your full time career?

I never had an agenda when I was at SYN or 3RRR to work at Triple J. But I feel very lucky and proud that I ended up here. I think that the hunger to create, communicate and share what I was passionate about drove me, and was central to why I succeeded.

You moved to Triple J in 2005, hosting the weekend program – how did that transition come about?

About a year or so before that, I’d participated in this event called NOISE – it was a youth media festival that played out on radio, community television, newspapers and online.

I applied for and received a grant to make three radio documentaries, and the panel critiquing them included Chris Scaddan – the then Acting Program Director for Triple J (he’s now Station Manager).

We met at the launch of NOISE and he asked me if I was interested in doing some summer fill-in shifts and mid-dawns on Triple J, so it began from there. A year later, I was offered a full-time position.

Did you find radio broadcasting to be an overly competitive industry to break into?

Personally, no. However, I came up within an incredibly supportive community radio environment. I had a few great mentors who helped me along the way, and always showed immense support.

I also think I just dove in and tried to get as much experience as I could, so I probably didn’t notice competition too much as I was too busy focused on my own radio dreams.

What interview tips do you have for anyone pursuing a career in radio?

Be prepared, but also be willing to throw your questions to the side and follow whichever way your interview goes.

The most important thing to remember is that an interview should be a great conversation, with information and entertainment as an outcome.

You’ll never unearth gems if you’re not listening to what your subject is saying, and just going down a list of pre-prepared questions.

It can be scary to go off your plan but you’ll usually get something that no one else has before, if you just follow the flow of conversation (and are ready with a winner follow up question).

Is there a lot of pressure to stay on top of the latest music in a position like yours?

Yes! The amount of music being produced each week is mind-blowing.

I get sent around 200 CD’s, digital files, SoundCloud links and the like each week, and I still seek out music that isn’t being sent to me, to keep on top of it all.

I try to listen to everything I’m sent and I love seeking out those gems that send shivers down my spine – and then get Triple J listeners equally as excited.

This is my job, and so while it’s busy and there’s a lot to deal with, I ain’t a coal miner. It’s pretty much the best job I can think of.

I can imagine you get to meet some pretty great people – has there been any one moment that’s been a real highlight during your time at Triple J?

Picking one is hard; I think I’ve checked almost all of my heroes off my bucket list.

Speaking with Brian Eno during a Take 5 co-host was not only a personal highlight, but really shifted the way I thought about music and creativity and is a conversation I still think about often.

What is your best advice for someone pursuing a career in radio broadcast?

If you’re not volunteering at your local community radio station, start.

It’s not giving your time away for free, it’s hanging out with some of the best people you’ll meet and gaining experience you’ll absolutely need if you want to pursue a career in paid radio work.

It’s also really, really fun. Places like FBi and 2SER in Sydney, SYN FM, 3RRR, JOY FM and PBS in Melbourne, RTR in Perth, Three D in Adelaide, Edge in Tasmania and 4ZZZ in Brisbane are all great starting points and they love volunteers!