If you thought an internationally renowned fashion writer would spend her spare time basking in the sun, sipping a martini and reading a magazine, you would be wrong.

When I make the call to Glynis Traill-Nash she is not at The Sunday Telegraph office where she is acting Style Editor, nor is she basking in the Sydney sun.

She is, in fact, busily renovating her bathroom. And much to her own contentment, she has managed to squeeze in another coat of paint before my call. 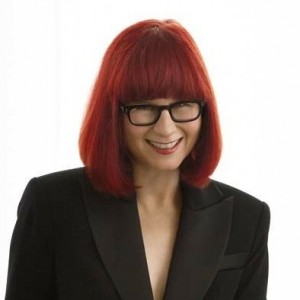 The not-so-glamorous notion of bathroom renovations is far removed from what is usually associated with Traill-Nash. The witty fashion critic can often be found front-row at catwalk shows, scrawling notes that her followers will soon take as gospel.

The collector of vintage Yves Saint Laurent can still recall her first international fashion event: a Chanel couture show in Paris. Such an event would make most fashion enthusiasts weak at the knees. But, as Trail-Nash explained, even a Chanel show cannot guarantee a glamorous entrance into the world of fashion.

‘I will say that it was very funny because the actual show was quite outside of Paris in this park and I had a taxi driver that left me at entirely the wrong area,’ she laughs.

Traill-Nash attended three seasons of couture while working as a Fashion Editor at The Sun-Herald. According to her, going to Paris was just as much about ‘brushing up’ on her French as it was about fashion.

Traill-Nash did not enter the world of journalism in the most conventional way. She began undertaking French and Theatre Studies at the University of Western Australia and it was then when she was in her mid-twenties that she decided to pursue a career in fashion writing. But Traill-Nash confesses she was still holding on to a separate aspiration.

‘I was really still trying to pursue a career as a jazz singer, that was my absolute passion and, look, it still is to be honest.’

For ten years, Traill-Nash lived what could be described as a double life. She worked as a sub-editor by day and moonlighted as a jazz singer and actress.

Her jazz outfit performed regular gigs and she also had a one-woman-show, which was later taken to the Edinburgh Festival – something she fondly describes as ‘one of the best times I’ve had’.

Traill-Nash packed her bags and moved to London at age 25. Her affair with jazz continued as she appeared at bars in Soho and featured in a Caryl Churchill jazz opera.

‘I mean I’ve always loved fashion, I’ve always been fascinated by fashion, by the history of fashion,’ Traill-Nash says.

And write about fashion she has.

Traill-Nash has gone on to write for an array of Australian publications. She has held the position of Fashion News Editor at InStyle, Fashion Features Director at Grazia, and Fashion Editor at The Sun-Herald. She has also written for The Sydney Morning Herald, Harper’s BAZAAR, Qantas and Who.

She has free-lanced for the last two years and has contributed to international publications such as Vogue China, InStyle UK and Harper’s Bazaar in both Singapore and Turkey.

Traill-Nash’s presence has gone beyond print and penetrated the realm of television. She has made guest appearances on programs such as Today, A Current Affair, The Morning Show and Project Runway. She has also featured on an array of local and international radio shows.

‘I mean, at the moment I’m quite liking the broadening of things and I quite enjoy having a bit more of a presence outside just print. It’s been an interesting learning curve the last few years.’

Despite all her accomplishments, Traill-Nash still wonders what could have been if she focused on one of journalism or jazz, instead of both.

‘I question this all the time. Because for me, the more I was trying to work on the jazz thing, the better the day jobs kept getting once I broke into it,’ she says.

‘But you can’t live with regrets and I don’t regret anything and I certainly will say that I think that it makes for a more interesting journey if you have other interests on the side.’

Although Traill-Nash has divided her attention between jazz and fashion, she suggests that to pursue a career in writing, it must be done whole-heartedly.

‘I say to anyone wanting to get into journalism, don’t get into it for the money. Get into it because you love it,’ she says adamantly.

The world of fashion is ever-changing, as are the plans of the iconic Traill-Nash. In addition to potentially returning to study, she has some more mysterious plans on the way.

‘We’ve got a couple of lines in which I am just loathed to even mention just in case they don’t happen. But one is outside print and if it happens I will be very bloody excited.’

Regardless of whether her plans come to pass, Glynis Traill-Nash will remain a name synonymous with Australian fashion. And even if her newly renovated bathroom is the only witness, the red-haired fashion writer will continue to sing jazz.

Susannah Woolley is a first-year Bachelor of Journalism student at La Trobe University. You can follow her on Twitter @SusannahWoolley.