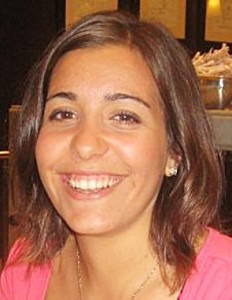 Aimee Vinci’s career in journalism began ten years ago after scoring a gig on radio. ‘I hosted a sports program on the local community radio station,’ says Vinci. ‘Being community, or volunteer, radio, I’d be in the studio on my own and do my hour program while running my own soundboard. My love for broadcast started there.’

The now 22-year-old – yes, she was only 12 when she first appeared on the airwaves – graduated from La Trobe University in 2010 with a Bachelor of Media Studies and has since moved back home to Queensland. She is now a reporter for the Whitsunday Times.

Vinci, who has also undergone work experience for a number of different television networks, is the perfect example of how hard work and determination can pay off. I had a chat with her about what it’s like to finally be a working journalist.

What made you go into journalism?

It seemed like a pretty exciting career. You can travel with it and chop and change; go into broadcast, print or online. You can gain knowledge about so many different things. We used to have a really good journalist here in town. She worked for one of the local newspapers. I used to see her around – she’s really nice and well respected, and in the know. We’ve found each other on Facebook and she remembers who I am. That was really what got the ball rolling.

Tell me about your current job with the Whitsunday Times. What is your role there?

I’m a cadet journalist. It’s my first paying journalism job. I do the entertainment section of the newspaper. I also handle some news and community stories, as well as business stories. I do the ‘on the water’ section because, being near the ocean, we have a lot of sailing and fishing fans. I help our sports reporter with the sports section, and I put our stories and photos online each week. I also write features. It’s quite a lot.

A lot of people in the industry say it’s about who you know, not what you know. How true do you think that is?

I think it comes down to about 90 per cent who you know and 10 per cent what you know. My job now, I got that mostly because of who I know. Even when you’re out and about, say in the city, you’ve got to know who the mayor is. Some people might say that’s what you know, but it’s also who you know. You’ve got to know who public figures are and who your bosses are. And it’s also that they know you and remember you, maybe from a funny line you said in conversation.

What is the most interesting story you’ve covered?

The most interesting, but also the hardest I’ve ever had to do was about my fiancé’s relative. I found out his cousin was in a car accident and had died. I went to work – it was my second day there – and told my editor in the morning. She turned on her computer and there was an email from our sister paper in Mackay wanting information from our end because he lived locally and they thought someone here would know him. There was also a press release from the police with details of the accident. She asked if I wanted to cover it. I ended up calling the family, went out there, got some photos and spoke with them. It was absolutely horrible, but it was good because I got to write a tribute piece.

In instances like that, when someone has experienced tragedy or trauma, how do you remain professional as a journalist while conducting an interview?

You’ve just got to be the person before the journo. For me, to go through the steps of how to approach the family was really hard. I didn’t want them not trusting me with information and thinking that anything that happens in their lives I’m going to publish. But at the same time people out there want to know, and so you sort of become the journalist within the community. I had to handle it personally as well, but at the end of the day people read the story and it got so much feedback.

Even today, there was a fire at a local restaurant, and the owner, he didn’t want to talk. After everything that’s happened in the town – cyclones, earthquakes – he was just traumatised. He didn’t see the relevance of [the story]. I was really careful not to push him too far because he also couldn’t speculate on how the fire happened for insurance reasons.

In your view, how far do journalists go to get a story?

I don’t think we’ve ever gone too far. We don’t slander the mayor in our paper, for example, because he’s got to live in this community too. But if there is something controversial, something that he is hiding, we’ll publish it. We publish the good stories too, like when he visits a kindergarten. We write the good, the bad, the ugly, but at the end of the day it’s got to be truthful. I’m sure there are other places where they do unethical things, but I work with a really good team.

Moving on to your passion for broadcast, you did an internship last year with Channel 7 in Mackay, near where you live. How did that come about?

I had to do it at the end of my degree. I knew I wanted to come home and do it – my fiancé was here. I’d already done some work experience in the city, but I found people were always telling me to go regional because that’s where you get the best experience. I just ‘googled’ the network – they have a really good reputation up here. I got onto a number for a guy in the tape room, and then got in touch with one of the journalists. They had a journo who was leaving, so it fitted in well. It lasted four weeks and I wrote all my own stories for the local community news. I did everything except for voiceovers.

You’ve also worked with Channel Ten and the ABC. What did you do there?

It was all work experience. I helped out in the newsroom and went out with a couple of journalists [who were covering stories]. I listened to everything they said and took notes. In the studio I’d listen to them voice their story, listen to the pace and pitch, and watch it all get [edited]. Some days a story wouldn’t even make it into the news, or it might just end up being the vision at the very end because more newsworthy stories came up. I also did my fair share of making coffees and sweeping floors.

Do you think journalists should be capable of working across all media platforms?

It depends on the individual. I’ve got a passion in broadcast and sometimes I wonder what I’m doing working for a newspaper, but I’m improving on my writing and communication skills. It’s interesting to know how they all work. People definitely need to learn online, for research and because so many people refer to websites, but if someone in print wants to know broadcast [for instance] it’s up to them.

What is your view on the future of journalism in Australia?

I’d like to think the newspaper will always be here. In our community people love to get their paper on the lawn, but I think it’s all going online. If I hear something and want to know more, I ‘google’ it or look at a news website’s archives. It’s easy access and it’s a really good resource for journalists.

Jessica Buccolieri is a Journalism Honours student at La Trobe University and was a member of the upstart editorial team during the first half of 2011.  She is currently writing a thesis about the effects of social media on modern journalism. You can follow her on Twitter: @bjessa.

More details about the Working Journalist project can be found here.