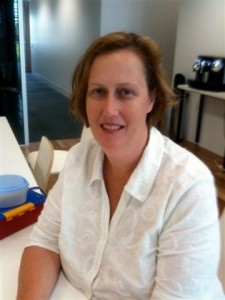 Whoever coined the phrase “jack of all trades, master of none” clearly never met Alex Wake. At age 17, Alex kick-started her career in the media with a cadetship at a country newspaper, and has since gained wide recognition for her work in radio, television and on-line media, which led to her appointment as a government minister’s press secretary and a journalism educator at the South African Broadcasting Corporation. Yet Alex, currently lecturing in journalism at RMIT while completing her PhD, maintains that she still has much to achieve in her professional career, and would like to become a foreign correspondent in the future. Although new technology is revolutionising the journalism industry, Alex insists that a journalist’s role as the watchdog of those in power must never change.

How did you start your career as a journalist?

I started as a cadet journalist at the age of seventeen at a country newspaper in Queensland; it was called The Rockhampton Morning Bulletin, I went from there to The Mackay Mercury. I did start at university but I was offered the cadetship so I went and did that. I won a journalism award, it was called the Anning Barton Memorial Award for Journalism, and it recognises good journalism by country journalists. As a result of winning that, I got sent to The Daily Star Newspaper in Ireland, and I worked there for a year. So I went from very sedate, country conservative newspapers to a country in trouble with the Northern Ireland conflict.

What is your journalistic philosophy?

Speakers of the truth and watchdogs of society. I suppose for me the thing I talk about most is the need for journalists to understand their role within a democracy and our role as watchdogs of politicians, and that this is an extremely significant and important role, and I don’t think it is one that younger journalists appreciate to the full extent that they should. I think because journalism has increasingly become more focused on lifestyle and entertainment, people forget that journalism, at its core, needs to be about ensuring that we have a society that works, and that our government officials and politicians are held to account.

You spent three years working as a press secretary for a Queensland government minister. Did the skills you acquired as a working journalist help you in this role?

What characteristics do you believe all graduate journalists should possess?

Excellent English skills, even better story-telling skills, impressive research skills and a love for changing technology. They are never afraid of a new computer or program or a new way of delivering their story.

In recent years there has been lots of debate in the media about how new technology is changing the journalism profession. Do you have any first-hand experience of this?

Absolutely, I started in a newsroom with telexes and computers. Then I went to the ABC and we had two typewriters and carbon copy newspapers. I now work with digital editing and Photoshop, which hadn’t been invented. I Twitter, I Facebook, I do just about everything that you can do as a journalist these days. My mind still shivers with new programs and applications, and I have bulging notebook that I keep beside me, for instructions on how to do things. It is a revolution in technology and one I enjoy, but I just wish I could remember the passwords.

Do you believe a single journalist can still change the world?

Yeah, I do. But I’m not sure that it’s in the same way that it was done in the past. People like Michael Moore, who do those mockumentaries or whatever they call them, people who can appeal to pop culture, who can get people watching, are more likely to change the world than individual journalists working for broadsheet papers, but I think the ability is still there.

Are you happy with the state of contemporary journalism in Australia? Do you think it needs to change and why/why not?

I think that there is a nice mix. My concern about journalism is probably more a concern about society not caring enough about those in power and what they do, more than journalism itself. I wish more people listened to Radio National, and bought The Age or The Australian, rather than sitting on a train, listening to their iPods and reading Mx. But that’s more of a societal issue. I think we have a good mix of journalists out there.

Have you ever been disillusioned by the journalism profession? If so, what kept you going?

When I was a press secretary I was constantly disillusioned. When you’re a working journalist, you think everyone is ethical, like you are. When you become a press secretary, you discover that they are not. There are a lot of journalists out there who lie, they cheat, they deliberately mislead, and that I found very disappointing. There is a larger number out there than I had imagined.

What has been your biggest career challenge so far?

Probably coming back to a newsroom when I hadn’t been in one for eight years. I went off to work for the government for three years, and then I started teaching, and it was eight years between newsroom gigs. I walked back in to the ABC, and it was good that some of the software was still the same, but the biggest change I noticed was that it didn’t matter what question I asked, someone would say “just Google it”. So it was keeping up with technology.

Which journalist do you most admire and why?

I admire so many journalists, and it would be very obvious to say Michelle Grattan or Laurie Oakes, because of my interest in politics. But the ones who impress me are the journalists at The Colac Herald, for example, who day in and day out write stories for their community, and really try to make a difference in their community. There the ones, the unnamed journalists. Country journalists doing the best job they possibly can, with or without many resources.

In a word or two, how would you describe your journalistic style?

Fast. Because I’m a radio journalist, I work quickly.

Is there anything else you would still like to achieve as a journalist?

Absolutely, there’s heaps. I always wanted to be a foreign correspondent, and I’m not trying to do that now. But maybe after my PhD is down the river and I get to the stage where I’m over University, maybe I’ll go back and do that.

What exactly makes a great story for the readers?

One that’s entertaining, but significant. So, people who can get very significant or important information across to an audience in an entertaining way, that’s to me a great story, and there are not a lot of people out there who can do that.

James Briggs is a Bachelor of Journalism (Honours) student at La Trobe University.

You can find more details of the Working Journalist project here.