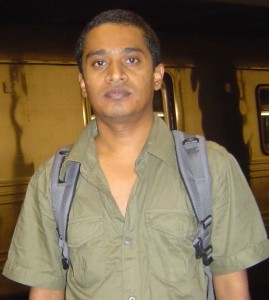 ‘Lights, camera, action…cut’. Sounds a bit unlikely situation for a journalist? Not for Sri Lankan television journalist Amal Alvis. His passion for television became a reality when he started working as an assistant director in serial drama productions known as ‘teledramas’, a popular entertainment medium in the country. Straight out of school he joined a leading television production house in Sri Lanka. The enthusiastic youngster grabbed the opportunity with both hands to work there. He assisted leading ‘teledrama’ directors and worked with star casts for three years.

In 1996 his television path took a technical turn as he changed offices becoming an analog video editor. Being an editor did not stop him from following his true passion in television – journalism. While being an editor he also started working as a television journalist, writing, producing and editing his own stories. Amal completed a Diploma in Journalism and Communications at the University of Sri Jayewardenepura in 2001. Studying about his field of passion never ends for Amal. It even brought him half way across the world to Melbourne. However, it feels like working back in Sri Lanka as Amal and I chat in our mother tongue Sinhalese.

Having tried your hand at many aspects of television why did you decide to become a journalist?

A journalist is really the voice of people. A journalist is able to tell stories of people otherwise may not be heard. My work has taken me across many places and I have met many remarkable people. It is a very passionate profession and it is also a very challenging profession.

What do you think about television as a journalistic medium?

Television is the most powerful journalistic medium. But I think it is also the most limited medium. We try to express a story through pictures and within a square television frame there is so much so that you can depict. A five minute story sometimes takes days of work. We waste so much time of our subjects and only feature them for a few minutes, which is a very long time in terms of television.

How do you structure your stories in a way that is also visually appealing to the viewers?

Television journalism is a lot about visuals and sound. Whatever story I do, I first think of how to structure this visually. How can pictures speak for the story? Having a rough script and a story board helps but not everything can be planned. When reporting sudden stories you have to think on the spot about making it visually creative. Sound is equally important. Without quality sound the story would not have a good impact just because the visuals are good. Without the right natural sounds it’ll be flat. So there should be a balance between good visuals and sound.

How do you find your stories?

The most important resource for a journalist is contacts. I have found most of my stories through contacts. Sometimes it’s almost as if the stories find you. Being in touch with the daily happenings in your country and in the world is important. This gives you up to date story ideas. I use newspapers and websites to update my knowledge about what is happening around. By this you can see how different types of media are interdependent on each other for information.

As a journalist how significant is it to enhance your academic knowledge about journalism?

Very significant. Journalism is a profession not a job. It is very important to be able to study about your practice. Not only does this enhance your education but it also helps you become a professional. Journalism education doesn’t end with a diploma or a degree. It should be something on-going and continuous. It is a rapidly changing subject and we have to keep track of these changes. If not we’ll be stuck in the past.

Do you think it is easier to find journalism jobs today with this kind of education?

Is the internet and social media impacting the way people watch television today?

To a certain extent, yes. People don’t have to come home to television anymore. You simply search the internet if you want to find out about news. But, I think that if a major event happens somewhere like 9/11 or the Asian tsunami, people would still tune into television. However, getting instant access to news is happening more and more on the internet or through text messages and other mobile services. But, with regard to this question we always answer in terms of what we see in developed countries. What about developing countries where the internet is still a luxury?

So, is television in developing countries still safe from the internet?

Do you ever consider self-censorship or do you report everything you find out?

A journalist is not entitled to extreme freedom. They should not report everything they know. Yes, I do consider self-censorship. We must not mix up our responsibilities with our entitlements because a journalist has the responsibility to decide what stories they should publish or not. Should we tell a story or not tell a story; the circumstance of reporting or not reporting a story must be our responsibility to decide as journalists. This is not something that should be bestowed upon the audience. All journalists are in a country where there is a certain system and a rule of law. We must understand this when we work.

Do you think journalists should make certain self sacrifices in order to report what they know? Or is it unfair to expect this from a journalist after all who is also only a person?

Everybody makes sacrifices in every profession. And this is common to journalists as well. Yes, a journalist is also a person. They are aware of the consequences of their work. What makes journalism such a challenging profession is the fact that it is a profession that goes beyond a job description. Sometimes sacrifices are necessary to report certain things. Journalists become journalists because they love this challenge. This doesn’t free the authorities and governance from their responsibility of creating a safe working environment for journalists.

How much do you love your job? Will you trade places with any other job if you had the opportunity?

No, I don’t think so. It is the best job in the world. I love television and I love being part of it. I love being a storyteller for a living.

Shashini Gamage is a journalist and  Master of Global Communications student at La Trobe University. More information about the Working Journalist project can be found here.