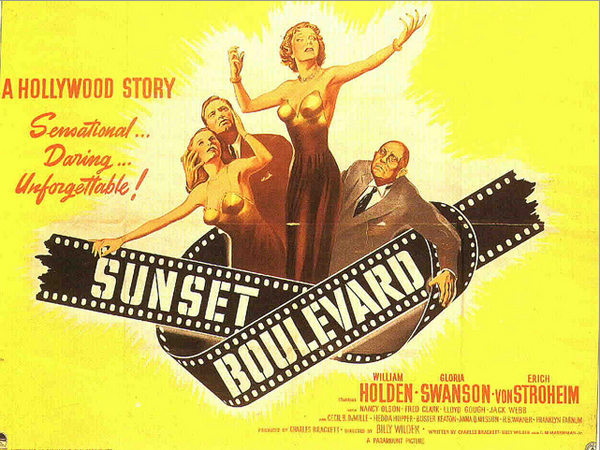 The other night I was home alone with not much to do, so I decided to further my cinematic education by watching a classic black and white movie.

I decided to go with Billy Wilder‘s acclaimed 1950 noir, Sunset Boulevard. With an IMDb rating of 8.6/10, a 98% ‘Certified Fresh’ approval from Rotten Tomatoes and 11 Academy Award nominations, I settled down on the couch with my cup of tea feeling extremely confident my decision was a good one.

But as the end credits finally came up after an hour and fifty minutes, I was left feeling disappointed.

It wasn’t bad, but it didn’t amaze me in a way you might expect from a film that has received almost universal critical acclaim. I tried my hardest to see through the various technological issues (mainly picture quality) and watch the film from the standpoint of an aspiring filmmaker. But the more I watched, the more I found myself becoming disengaged from the plot and wondering what else was on TV.

This isn’t the first time a black and white film has failed to win me over. I’ve had similar reservations with other so called ‘classics’ including The Maltese Falcon, Key Largo, To Kill a Mockingbird and even Casablanca, which currently sits at number three on the American Film Institute‘s 100 greatest American movies of all time.

Perhaps this is to be expected. Despite my interest in film, as a member of Generation Y I have been raised on a diet of trilogies, reboots, CGI and $200 million summer blockbusters. It’s hardly surprising that I struggle to relate to a film made over 60 years ago on a tiny budget with limited technology, and in a society recovering from the aftermath of a world war.

Anna Dzenis, an Associate Lecturer of Cinema Studies at La Trobe University, understands my thinking but stresses the importance of these older film genres.

“Whatever creative work that young artists want to pursue, it’s important that they place themselves in the history of their practice – whether they are painters, photographers, musicians, sculptors, actors or filmmakers – you need to understand what came before you and how you can make a contribution.

“So, if you want to make films, it’s hard to imagine that you wouldn’t want to know the history and that you wouldn’t try and watch these earlier films that were part of it. Wouldn’t a young filmmaker want to to see the work of Welles, Sturges, Lang, Godard, Truffaut, Preminger to understand the way they used the formal and narrative elements that were available to them at the time?”

I posed the same question on Twitter to Rian Johnson, writer/director of the 2012 sci-fi thriller Looper (yes, the one with Joseph Gordon-Levitt). His response was equally resounding.

@tom_midwood Dude. Trust me, have a solid year where you watch nothing but pre-1960 B&W cinema.

Interesting stuff, but not entirely surprising. Johnson is well known for a being a romantic of black and white cinema and has frequently been influenced by older movies in his own work. His first feature, Brick (2005), borrowed heavily from pre-WWII hard-boiled detective fiction and as a result, despite a modern day setting and a cast made up predominantly of high school students, it still fits neatly into the film noir genre.

But if Johnson had invested so much time and effort into making his film an authentic noir (or neo-noir to be more accurate) then surely an aspiring young filmmaker could avoid going through the old black and white movies and just watch Brick instead?

“If you’re a film lover, how can you understand a remake if you haven’t seen the original? Re-imagined, updated and remade films are so often in dialogue with these earlier films, so the experience of watching one is totally enriched by seeing the earlier version.”

That being said, it is getting harder for younger audiences to find common ground with the old classics. Cinema is one of the fastest evolving industries on Earth with new techniques, ideas and technology (such as Red digital film cameras – see title) taking it to new levels that weren’t even considered back in 1950. Sad as it may be, it could only be a few decades before these sorts of films become lost and forgotten forever – ironically suffering the same fate as a certain Norma Desmond in Sunset Boulevard.

So if you’re an aspiring director, hoping to be the next Stanley Kubrick, Martin Scorsese, Alfred Hitchcock or Steven Spielberg, why not turn off that mainstream blockbuster and put on a classic black and white flick instead. Even if it’s not quite to your personal taste, it could still inspire something or surprise you. At the very least you’ll be a more complete filmmaker for it.

Tom Midwood is a third year Bachelor of Journalism student at La Trobe University, and a Staff Writer for upstart. You can follow him on Twitter @tom_midwood.