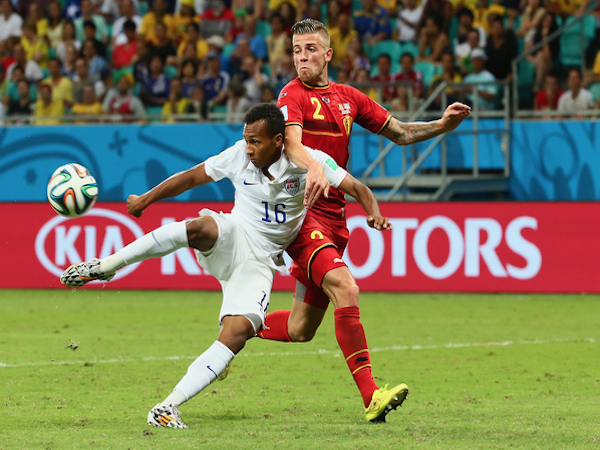 In a country where they award titles like “World Champions” to the team that wins the National Football League’s Superbowl, despite the sport only being played professionally in one country, the world game has tended to fall by the wayside.

But this is slowly changing. The red, white, and blue are coming around. They’re getting behind Michael Bradley, urging on Clint Dempsey, screaming for Tim Howard and Omar Gonzalez and Chris Wondolowski.

They sure did in Brazil. Although the Americans are now eliminated – and it took one of Belgium’s brightest stars to hammer home the final nail – they were by no means disgraced.

The USMNT took it to Ghana, first blowing them away with a Dempsey goal inside 30 seconds, then stoically defending for almost the full 90 minutes. It took some Andre Ayew magic to tie the scores, before John Brooks made himself an American hero with a neat header in stoppage time.

On to Portugal and the might of Cristiano Ronaldo, who was so far succumbing to apparent claims from a Ghanaian witchdoctor that his knee was cursed.

Poor defending led to an early goal from Nani, before Jermaine Jones’s screaming strike set the travelling Americans off again. Dempsey’s dramatic goal to put the USA in front eight minutes from time.

But you can’t keep a good man down – and Ronaldo is the best of men.

A heat map of Bradley’s contributions to the United States’ group stage reveals that, over the course of three games, Bradley ran 54.7 kilometres. That’s the most of any player at the entire World Cup.

Bradley can therefore be forgiven for giving the ball away with less than 30 seconds left on the clock against the Portuguese, which led to the perfect Ronaldo cross and Silvestre Varela’s headed equaliser.

It boiled down to the USA needing a point from their last game against Germany to progress to a round of 16 game against Belgium. All the statistics, bar the goals column, point to a blowout. The Germans had 63% possession, 13 shots on goal to four, eight of which forced Howard into saves. Yet it was only a 1-0 win to Germany.

However, coupled with the Geman routing of Portugal earlier in the tournament, the result secured the USA a passage into the round of 16.

Belgium, who had promised so much in this World Cup, stood in their way.

Howard, whose 16 saves spawned a Twitter hashtag – #ThingsTimHowardCouldSave – which depicted him rescuing the Titanic and catching Mufasa, among other things – kept the Belgians at bay until extra time.

Then Romelu Lukaku happened. All 6’4″ and 100kg’s of him. Sheer physicality led to Belgium’s first goal, before Lukaku barged his way into the area and slammed home the second.

Julian Green, who plays his club football at Bayern Munich, got his first action of the World Cup deep into stoppage time and promptly defibrillated American hearts with a sweetly finished volley.

If not for the heroics of Thibaut Courtois, who got in the way of a brilliant USA set piece to deny Dempsey an equaliser, the result may have been very different.

But it wasn’t. The USA has gone home, taking with it its passionate, gloriously dressed fans. Superman, Wonder Woman and Captain America may not need plane tickets, but they showed up when their country needed them.

In cities, towns and stadiums all across the USA, those who couldn’t make it to Brazil partied, watching the games en masse, kindling a newfound love for the USMNT.

Barack Obama watched games on Air Force One. Professional baseball teams and NFL players tweeted their support and ran around in USA shirts.

A shift towards youth is already happening in the national team’s ranks. Manager Jurgen Klinnsmann left Landon Donovan out of the side for the World Cup and there are a number of prospects ready to step into the team over the next four years.

Green is 19. DeAndre Yedlin, a product of the MLS, is 20. Gedion Zelalem of Arsenal, who will qualify for US citizenship later this year, is 17. Joshua Perez, currently at Fiorentina, is 16. Ben Lederman, the only American ever to be invited to train at Barcelona’s famed La Masia academy, is 14.

They are the next wave of American stars, who will be tasked with carrying a nation’s hopes on their shoulders.