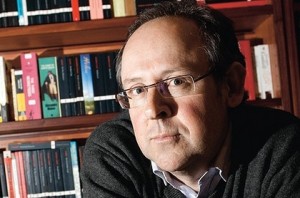 Charles Happell began his journalism career in 1985, as a cadet with Melbourne’s Sun newspaper. After covering federal politics, he turned his hand to sports journalism, working in London and then for Reuters news agency in Milan. He joined The Age in 1993, covering the AFL, cricket and golf; becoming the newspapers Sports Editor in 2002. After leaving The Age in 2005 having ‘written about blokes running around a football field’, Happell spent some time as a freelance columnist and authored two best-selling books.

Happell is an ardent sports fan. The enthusiastic timbre in his voice when discussing football and golf reveals that passion. ‘Charlie’ is also proud of his own athletic prowess having ‘played district cricket with Prahran and amateur football.’ This passion has grown into a successful career as a respected sports journalist.

His love of sport, combined with an entrepreneurial spirit inspired him to create the BackPageLead, a website providing 24-hour sports coverage from around the globe.

What is your definition of a journalist?

It’s someone who writes about an event entertainingly and instructively. That is, it teaches the reader something about what happened at a sporting event or a political rally, but also does it in an entertaining way, so it makes people want to read it. Part of the skill of journalism is making people enjoy what you write. So I think a good journalist is both educational and entertaining.

What is the competition like against other journalists for a story?

Today it’s cutthroat. In the days when I started in the mid-80s, it was a bit more relaxed. Today there are so many journalists out there. There are many more accredited journalists in the AFL, so the pressure is on to get a story. However, it depends whether you are setting yourself up as a news-hound, or someone writing feature pieces, where there isn’t that pressure to break news.

But if you’re a news breaker, and that’s what you set yourself up to be, than your worth to a newspaper is judged by how many stories you break.  That is why good news breakers like Caroline Wilson at The Age are so valuable, because not many people want to take on the responsibility of having to chase down news everyday and break stories.

What risks do journalists take in breaking a story?

You have to take risks and you have to prepare to be disliked. In fact the best journalists are the ones with a thick hide who don’t care whether they are banned by a club, banned by the AFL or whether they get slated on The Footy Show like Caroline Wilson has been repeatedly. In fact, you aren’t doing your job if you’re everyone’s friend. The best journalists are the ones that keep sportsmen at arms-length and write about them honestly. Journalists coming out of journalism schools these days need to understand that your job isn’t to be friends with these people; it’s to write honestly about them and hold them to account.

What prompted you to leave The Age and create BackPageLead?

How has BackPageLead been going?

BackPageLead continues to go well, although we’re always looking for more readers. The numbers of readers you get — i.e. the ‘traffic’ — is crucial to the sort of advertising revenue you can hope to attract.

What is the business model has BackPageLead implemented?

No subscriptions, everything’s free. So we rely on advertising revenue to make the money we need to pay contributors, website maintenance, rent and other overheads.

We would think about it, but only after we’d attracted a large and dedicated following. Until then, it would be a waste of time. There are so many other sports websites out there, that if we started charging readers, they’d go straight to the other sites.

Today the news media is undergoing drastic change because of the opportunities for independent journalism on blogs. What do you think about this phenomenon?

It’s healthy if it’s professionally done and upholds the same standards that newspapers do when researching stories and double-checking facts. It’s harmful if there are people writing blogs out there going off half-baked, writing anything that comes into their heads without having it researched and written properly, or having facts checked. It’s a double-edged sword. It’s healthy if the journalism is of a good quality but obviously there are many sites out there publishing rumours, innuendo and speculation. That’s the internet for you! There’s a plethora of sites out there; some are good, some not so good.

What challenges did you face going from covering federal politics to sports journalism?

What is the most interesting story you have ever covered?

Being at the US Masters in 1996, the first major golf tournament I covered for The Age.  That was the year Greg Norman built a six shot lead going into the final day … the first time an Australia was going to win the Masters and the first time Norman himself was going to win a major in the US.  It all went horrible wrong; expectations were huge after three rounds and it ended in a very sad way.

What does the future hold for journalism in Australia?

I fear for the future of some newspapers. The circulation of the quality broadsheets is diminishing, as are the tabloids, but the tabloids are coming off a higher base. The Herald Sun and the Daily Telegraph in Sydney are selling something like 500,000 copies per weekday and The Age is always hovering at about 200,000.

I wonder if The Age will be around in ten years time. I suspect it certainly won’t be around in the form we know today, and will probably look drastically different. Their online product will be much more significant and they will plough more resources into their website, and journalism dedicated to Age Online, in the coming decade.

George Galanis is a  Master of Global Communications student at La Trobe University.

Find our more about the Working Journalist project.