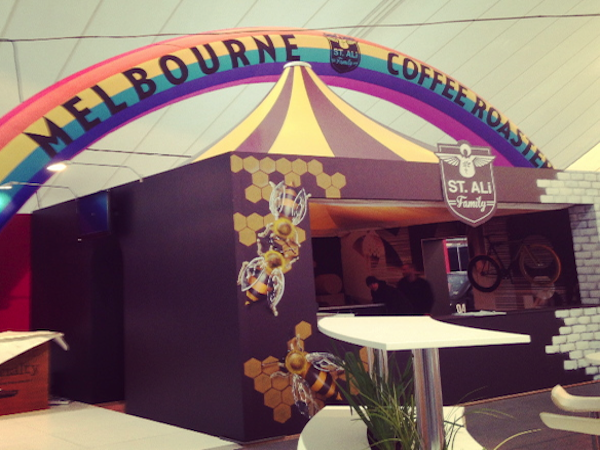 He takes a breath, pushes the button and the timer starts. The big red numbers glow and the countdown begins.

It’s the first round, the first competitor and the first coffee of the World Barista Championships. Roberto Pablo Caldas is representing Peru. He beat stiff competition to become the national barista champion and now he has fifteen minutes to prove he has what it takes to be a world champion. He’s nervous. His hands shake. English is his second language and he stumbles over his words.

The World Barista Championships are part of the 2013 Melbourne International Coffee Expo (MICE), where this year 51 competitors from around the world converged in Melbourne for four days of heated competition. The competitors have one goal, to become the world’s best barista.

The competition is not just about making coffee, it’s a performance. Roberto articulates with his hands as he explains the origins of his coffee beans and he asks the judges to pay close attention to its sweet caramel aroma, apple acidity and the mute aftertaste. Blasting from the speakers is Bob Dylan’s ‘Blowing In The Wind’ intermingling with Roberto’s heavy Portuguese accent to momentarily transport the crowd to the Columbian coffee fields.

As soon as he steps behind the machine the nerves disappear. His hands stop shaking. He’s in control. This is what it comes down to. This cup of coffee. At the machine judges crowd around him, intensely scrutinising his every move. These are the technical judges, two of the five who will decide Roberto’s fate.  They check every single detail making sure nothing is secretly added while the coffee is pressed. 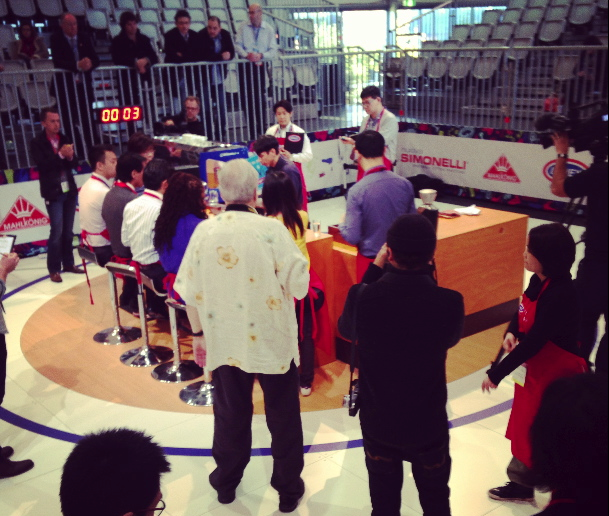 The grinder is not working. After such careful preparation, after coming all the way to Australia, the grinder won’t grind the beans. This will not reflect favourably in his scores. Roberto carries on though, eventually presenting his signature coffee to the judges. Inspired by the five elements fire, earth, wind, water and air, Roberto’s hard work is sipped, scored and then whisked away.

“Put your hands together for Roberto Caldas from Peru,” the MC’s voice booms out into the arena. The way he draws out his words seems more appropriate for a wrestling match than a coffee showdown.

If you thought coffee was simply a drink, think again. It’s more than a drink it’s a lifestyle. The contestants live and breathe coffee. And it’s not just the competitors; MICE 2013 brings together all kinds of coffee enthusiasts from around the world. The expo is the largest of its kind in Australia with 153 stalls filling 14.5 square feet devoted to everything coffee. It combines a trade show with education and competition.

The competition brings together national champions from over 50 countries. In 15 minutes they must prepare espressos, cappuccinos and an original signature espresso drink to a panel of international judges.

The second competitor to face this panel is William Hernandez from El Salvador. His performance goes off without a hitch. Avicii’s ‘Levels’ blasts from the speakers as he woos the female judges with his accent and attitude. While he describes his unique coffee processing technique – pulp wash – he entertains the crowd using a miniature puppet sun to represent the drying process.

“Coffee should be fun, that’s why I made a visual representation of what occurred”, says William.

William Hernandez has been working as a barista for a year at Viva Espresso, the same café which produced the 2011 World Barista Champion, Alejandro Mendez. While there’s no doubt his charm and charisma sway the judges, the real test is in the coffee. For William a winning coffee is all about aromas and he uses wine glasses to capture and contain the smell by placing it over fresh coffee shots.

“It’s a beautiful process, aromas are a big experience for a drink. The wine glasses capture it. It’s great,” says William.

The competitors’ knowledge and passion for specialty coffee is immense. Unlike coffee you buy from the supermarket, speciality coffee is both rich in history and in flavour and many of the baristas work directly with coffee beans from the fields to the cup.

“Specialty coffee is more or less artisanal coffee, meaning that the utmost of care has been undertaken during the growth, harvesting, processing, packaging, delivery, roasting as well as preparation of such a high quality beverage. It typically means that there is traceability from the bean back to the farm of origin, back to the particular plot of land it was grown on and in some cases, even the individual tree,” says coffee enthusiast, Ana Pipunic.

Over the four days of the expo more than 10,000 coffee fans from Australia and beyond come to revel in the world of coffee and experience the thrill of the competition. After fierce competition and hundreds of cups of coffee, the top baristas in the world were given one last chance to impress. The original 51 competitors were whittled down to six and competitors presented their coffee experience one last time.

In the end USA’s Pete Licata walked away with the grand title of World Barista Champion with Australia’s Matt Perger coming in second and El Salvador’s William Hernandez taking out third place.

The World Barista Championships were held from the 23rd to the 26th of May.

Madeleine Rice is a third-year Media and Communications student at Melbourne University. You can follow her on Twitter: @maddierose_r