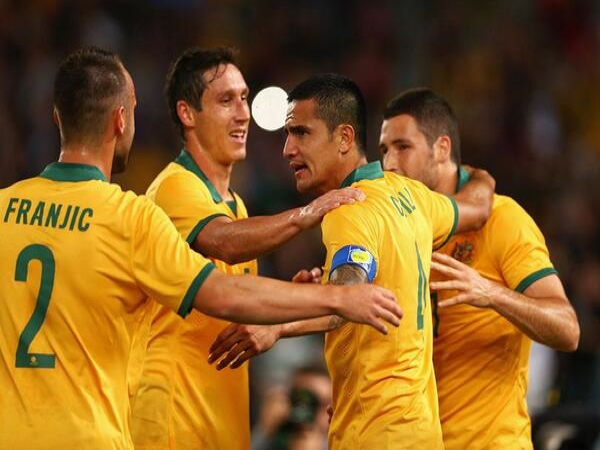 Mark Bresciano whips a left-footed cross into a swathe of desperate Croatian bodies gathered in the box. With just 12 minutes remaining, it is a hopeful ball played at a hopeful time.

But it bobbles at Harry Kewell’s right hip, six yards from goal and six yards from a goal that would earn the Socceroos at least one more match at the 2006 World Cup.

Kewell, the opportunist, strikes – all of a sudden the Socceroos’ fairytale has another chapter.

If Germany in 2006 was less predictable for Australia than the most farfetched of Hollywood scripts, why can’t the 2014 storyline be every bit as fantastic?

Half time: @Socceroos are even with South Africa 1-1 at the break thanks to goals by Patosi and @Tim_Cahill pic.twitter.com/a3O593Lbva

As a team and a nation ready themselves for an assault on the 2014 FIFA World Cup in Brazil, in un-Australian fashion, expectations are non-existent.

Many will dare not to dream in 2014. Pessimism, or realism, protects supporters from ultimate disappointment.

“I think the tournament’s come too soon for a team that’s in massive upheaval and transition.”

It seems getting three games worth of experience into a youth-infused Socceroos squad, before coming home for the 2015 Asian Cup, has become the mindset outside of the dressing rooms.

“I think the realistic aims are to blood players – for these players to show that they’re tactically adept and can cope with competition at the highest level, which will then hopefully leave them in good stead for them to make a serious tilt at the Asian Cup in 2015,” Lynch says.

But should the Socceroos board the plane to Brazil thinking they can’t pull off the improbable?

Placed in a group with reigning World Cup champions and world No.1 Spain, world No.13 Chile and world No.15 the Netherlands certainly lends itself to a level of doom and gloom.

The break-out of a heavily conscripted war between two of these three nations could be the Socceroos’ best hope.

But newly-appointed coach and captain, Ange Postecoglou and Mile Jedinak, are competitors and will not be packing their bathers envisaging days on the beach once the group stages are complete.

Postecoglou has nothing to lose, which works in Australia’s favour. With the toughest draw imaginable and only raw talent to choose from, media and supporters are expecting little from his side.

But his team will not walk onto the pitch without a pre-game speech about the possibility of victory.

Jedinak is all too familiar with being an ‘underdog’. He was a main cog in the machine, with manager Tony Pulis, that dragged Crystal Palace to an eleventh-placed finish in the top flight last season.

“Jedinak’s a whole-hearted, thorough competitor – a person of tremendous athletic ability, tough-minded and a warrior in a very tough league. He’s proven himself to be a leader through actions probably more than words with his time at Palace,” says Lynch.

“I think the appointment of Pulis made all the difference as to why they avoided the drop because they were a team that was struggling, but Jedinak played a key role in the club’s survival.”

Postecoglou and Jedinak will have the Socceroos single-mindedly primed for battle – there will be no discussions of playing to avoid calamitous defeat.

The Socceroos will need a minimum of four points in order to escape the group stages and progress in Brazil, as four nations managed to do in South Africa 2010. A goal difference of zero or higher will be crucial, with a 4-0 drubbing to Germany in 2010 the reason it was sent packing early.

Australia’s first encounter is with Chile – defend with discipline and be robust on the counter.

“I think that people are perhaps looking at Chile and saying ‘well, they’re not a European powerhouse, we can beat them’. I think that’s making the wrong sort of assumption,” Lynch says.

Use the nifty Tommy Oar, Mathew Leckie and Tom Rogic to worry the defence and draw fouls, for set pieces are going to be Australia’s most likely source of goals.

“If they’re going to get a result from any of them I’d expect it to be Holland. They might get a draw there,” says Lynch.

“Holland’s actually got a lot of young players. They’re a team in a bit of transition themselves and historically Australia’s actually had a fairly decent record against Holland.”

The Socceroos must attack at every opportunity, but must also hold on for dear life. Jedinak can be the man to aid the defence in central midfield, with Mark Milligan by his side. Again, speed on the counter will be the key to jagging a crucial goal.

With Spain hopefully taking care of the Netherlands and subsequently qualifying prior to their third match with Australia, possibly they will have less to play for and may bring a weakened attitude.

Until June 14, Australian fans can choose to dream about or prepare for the worst.

Did anyone anticipate that after 80 minutes against Japan in Kaiserslauten, just eight days later the Socceroos would have 40 minutes to put away a 10-man Italy to advance to the final eight?