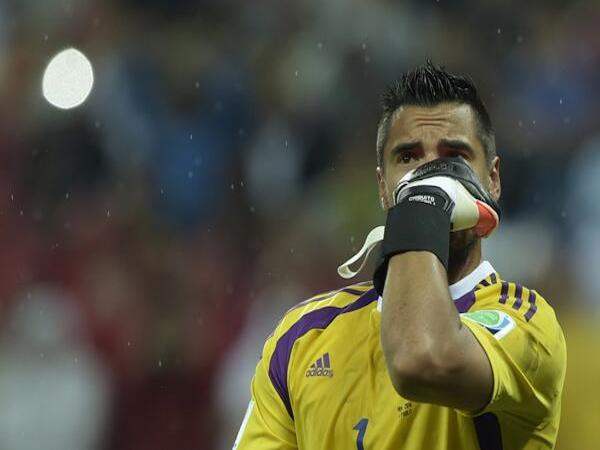 With a world-class five dovetailing one another in Brazil this summer, football pundits around the globe were salivating as they labeled Alejandro Sabella’s Argentina as one of the favourites for the World Cup.

Given the abundance of quality this five possess; this label was applied despite the defensive quartet in the same eleven being without any previous World Cup experience.

Such a contrast between an unknown quality as a rearguard combination and top level attacking talent would have unsurprisingly translated into Sabella’s men being the neutrals’ favoured team in Brazil, with goals flying in at either end.

After all, if a game became a goal-fest, the aforementioned five would have to be backed to come out as victors on most occasions.

Instead, Sabella has made a mockery of this prediction and the names of Ezequiel Garay, Federico Fernandez, Sergio Romero, Marco Rojo and Martin Demichelis have become (behind Messi) the stars of the Argentine brigade.

These five – complimented soundly by Pablo Zabaleta and one of the players of the tournament, Javier Mascherano, have conceded just three goals on their team’s journey to a World Cup Final at the Maracana.

Argentina have only put away eight goals of their own and won each match by the singular goal. Therefore the football from Sabella’s team has been primarily frustrating to watch for the neutral.

But the potential for any chosen forward line to devastate its opposition in an instant is obvious and, combined with a stingy back four, this has meant their opponents, particularly deep in tournament, have shut down the game into a tight slugfest themselves.

Belgium, with the likes of Eden Hazard, Dries Mertens, Kevin Mirallas and Romelu Lukaku and Switzerland, with Josip Drmic and Xherdan Shaqiri, both failed to find the net following the group stage against Romero and his wall of four.

Robin van Persie, Arjen Robben and Wesley Sneijder were added to the list of attackers who have suffered a fruitless night against the Argentines in Sao Paulo.

Although the results and nature of those performances may call for internal inquisitions into the style of play from both European nations, the organisation not typically associated with South American teams has grown from dissatisfaction into admiration following the semi final.

Germany will have to look to the group stages to discover how Sabella’s men can be beaten.

It was in its final group game, in Porto Alegre against Nigeria, that Argentina have looked most troubled defensively.

The pace and energy of Ahmed Musa appeared to trouble the lethargic centre back combination and the Africans were extremely good value in a 3-2 defeat.

The adage of “if it weren’t for some Messi brilliance”, although true on most occasions, simply cannot be used to justify an Argentina win any longer.

Luke Sale is a third-year of a Bachelor of Journalism (Sport) student at Melbourne’s La Trobe University and a staff writer for upstart. You can follow him on Twitter @lukesale1.