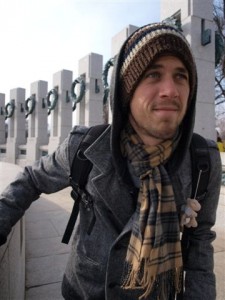 In 2010, Evan Schuurman was enrolled in the Masters of Sustainable Practice at RMIT – not the usual study path for an aspiring journalist. But then he decided to pursue a writing career in earnest, so he pulled out of the Masters program and chased up work experience at the Geelong Advertiser. Now he’s five months into his first paid journalism job as a reporter with The Courier in Ballarat.

Prior to enrolling at RMIT, Evan had studied a Bachelor of Business in Tourism Management at La Trobe University, followed by a Graduate Diploma in Development Studies. In his words, he’s studied ‘lots of stuff that has nothing to do with journalism’.

Evan is The Courier’s court reporter during the week, and on the weekends he works alone, getting an all-round taste of journalism in a regional city. Suzannah Marshall Macbeth spoke to him on a Sunday, midway through a 12-day stint on the job in Ballarat.

What made you shift into journalism?

I’ve always enjoyed writing. I don’t know what I thought I was going to do with Tourism or Development Studies, but I just never listened to myself and thought that I would make writing into a career.

What’s the first piece you ever had published?

When I was seven years old, I wrote a letter to KLM, the Dutch airline, because they stopped flying from Sydney to Melbourne and I thought it meant that my Dutch grandparents couldn’t come for Christmas. My Dad sent it into Dutch Weekly and they printed it!

Was work experience important in getting you a paid job?

Definitely. Work experience was the only reason I got the job at The Courier, because I didn’t study journalism and I’d never worked as a journalist. I wrote a few stories for the uni magazine and I did four weeks work experience at the Geelong Advertiser and two weeks at The Courier. When I was doing work experience I was really motivated and wanted to work hard. I’d be hassling the chief of staff to give me more stories, and coming up with my own ideas. I think that initiative looked good from their point of view.

On my first day of work experience at The Courier, I remember getting to my desk and it felt really good. I felt like I was in the right space, and when you see your name in print for the first time it’s really exciting. You just want to keep doing it.

Were you eased into learning the basics when you started at The Courier?

Not really. With regional papers you have to produce so much stuff that you just get thrown in the deep end straight away. The first couple of stories might be crap, but you learn really quickly and you learn not to make the same mistake twice.

As court reporter, do you follow the stories in terms of what goes on outside of the court as well?

That’s the goal – to bring a human element to every story. You can say exactly what happened in court, but if you can talk to witnesses or victims, or people that were affected by whatever the incident was in court, then you can bring a more human element.

You’ve obviously got a social conscience – is that part of why you want to write?

Definitely. That’s where the media is an amazing industry to work in, because you do help shape public perception. If you’re writing about issues that you feel really strongly about and you can back it up, then in the right context you can persuade people. That’s a pretty amazing thing to be able to do. You can write about issues that you feel passionate about, and so long as everything’s backed up and it’s balanced, then you can promote that agenda a little bit.

Have you had any ethical dilemmas so far in your writing or in your work?

I had an interesting one the other day, in court. This lady fronted the magistrate because she got two speeding fines in a 60 zone. She was really pissed off about it – she said the speed limit there shouldn’t be 60, because there’s paddocks on one side. I spoke to her and she posed for a photo for us near where she got booked. She was really keen, but I knew when I was writing the story that she would be ridiculed online in the comments. In that sense there was a bit of an ethical dilemma, but she had an agenda so she was using us as well. In that sense it’s reciprocal, and everyone wants something in the media.

Does the publication of your stories online have an influence on the way you write or the sort of stories that you pursue?

I don’t think the online environment affects the stories that I pursue, but it might change the way we write. Online is becoming more and more important, but if there’s a story, there’s a story – people are going to read it whether it’s online or in print.

One thing that’s really changing is that stories are being broken online. I think the role of the newspaper is changing – to fill in all the blanks and give people a story that’s different to that hard-hitting online news. For us it’s becoming important that our stories for print are more and more creative.

Do you think the hardcopy newspaper in Ballarat will be threatened?

I don’t know how it’s going to go, but I think somewhere like Ballarat will be all right. It might change in metropolitan areas – a lot more people will be reading news online, but I think The Courier’s got a good grasp on the market and the print here will stay for a long time. I hope newspapers never die!

Does your current job at The Courier offer enough scope for your interests in terms of your writing?

Yes, I think so. I like the fact that there are different rounds you can do, and I’ve written a few features as well. On Saturdays we have five or six feature articles, and so if there’s an issue that you’re passionate about, even if it’s a global issue, you can do a bit of research into it.

Where do you see your own journey going?

I’m pretty happy at The Courier. I’m not sure exactly what direction I want to go career wise, but I know that The Courier is a really good place to start. I would like to do a bit more travel writing – I’m trying to plan a few trips in the next twelve to eighteen months to get a few things published while I’m away. If you can network and get good contacts, and people know that you’re a good writer, then you have lots of opportunities.

It makes a huge difference to be working with people that you have been reading in the paper, and to be working with some pretty amazing journalists, getting experience and having editors that have their mobile phones full of great contacts. Being part of the Fairfax network is an opportunity in itself.

Suzannah Marshall Macbeth is a Master of Global Communications student at La Trobe University and a member of the upstart editorial team. You can follow her on Twitter on @equineocean which is also the name of her blog. More details about the Working Journalist project can be found here.