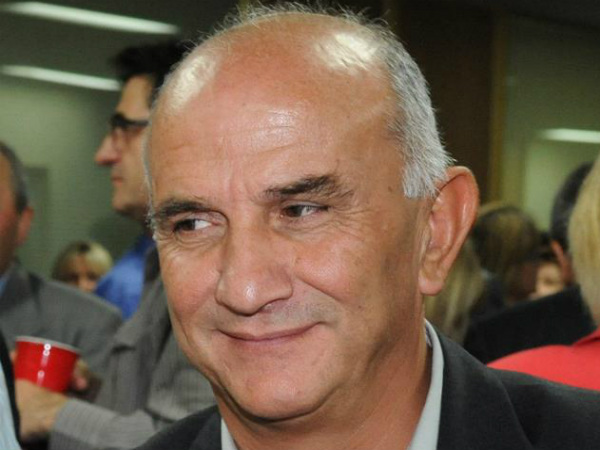 Sotiris Hatzimanolis’ interest in journalism grew when he started producing his high school’s student newspaper, in Chios, Greece. When he first arrived in Australia, at the age of 19, he worked for a (now defunct) local Greek newspaper and SBS Radio.

He started working for Neos Kosmos in 1979, until landing a full time role in 1990. Through opportunity, a hard work ethic and enthusiasm he was given the editor-in-chief’s role of Australia’s most successful Greek newspaper, Neos Kosmos.

Hatzimanolis has also worked for Greece’s national broadcaster ERT[, which was recently shut down under controversial circumstances, and the Athens News Agency.

Would you say that the focus of your newspaper is based on Australian news delivered on a Greek platform or news from Greece delivered to Greek-Australians?

The focus is on Greek-Australian news, I mean it’s Australian news. Of course we carry news from Greece, but only the big stories and issues that we think are of interest to our community. Our focus is our Greek-Australian community: it’s a large community, it has a lot of issues, there are a lot of stories. Even when a large Australian story breaks we tend to look at it from the Greek-Australian angle. I mean elections, we’re going to cover elections, but at the same time, we are more than likely going to have 10, 15, 20 characters from Greek backgrounds, members of parliament or senators, so we’re going to interview them to see how they went. Same applies when we’re dealing with the unions, with the farmers etc, we tend to look at everything from the Greek-Australian angle and how that’s affecting us.

How do you try to engage readers from non-Greek backgrounds?

Let me explain, we do realise that we have a large percentage of mixed marriages ok. So those partners…. some of them might take an interest in Greek community affairs or Greek culture etc. By presenting stories in such a way that they’re not targeted in such a way to national Greeks, if I can use such a term, the target is Australians who have an interest in Greek issues, whether they are of Greek background or not.

What does your role involve on a daily basis?

Lots of things in a small newspaper, it’s almost everything. It’s allocating stories, deciding what the range of stories of interest for publication might be – we have to cover them, edit the stories, as well as keeping an eye of how they are presented.

How do you think your role at a small newspaper differs to that of a large publication, like The Age or the Herald Sun?

With all due respect, I have the impression that because we are very short staffed, in our case, it is much more demanding and much more difficult than that of a big newspaper.

What has been the biggest story you have worked on for Neos Kosmos?

I can’t really point to a particular one, we have many…. quite a few successful stories. I think for example that, it wasn’t an exclusive story but the way we covered the Athens Olympics in 2004 was very, very impressive and so was when Greece won the European Championship (in 2004). Because we had a lot of resources and hard work and it was also greatly appreciated by our readers we were able to produce a special edition the next day of over 20 pages, full colour, to have them sold by 8:30 in the morning. But we’ve had plenty of stories that were picked up by mainstream media, on commercial stations, in The Age, the Herald Sun, The Australian on numerous occasions, so I can’t really point to a specific one.

What are the sorts of stories, Neos Kosmos has published, that have been picked up by the mainstream media?

I mean for example, last year, the Prime Minister Julia Gillard decided to attend the Greek-Australian festival Antipodes and decided to make some announcements there, and we had the story before it was released, and both The Age and The Australian picked up on it. Even with funny stuff, for example, two or three weeks ago (in May) we had an interesting story about Russell Crowe. He was in Mykonos, a Greek island, and he tweeted that he couldn’t believe that he is 49 years old and he had never been to a Greek island and the next day The Age had it, acknowledging Neos Kosmos.

How is Neos Kosmos trying to maintain its readership, in a time where there are challenges to both the media and maintaining the Greek language with second and third generation Greeks, in Australia?

As a newspaper we are still very successful. We do realise that the average age of our readers is getting older and older and that’s why we have introduced almost an English newspaper with a Greek insert in the Saturday edition and we are moving gradually into digital technology. I mean we have a web page bilingual in Greek and English, we have Facebook, Twitter and very soon we will be able to offer our printed versions in applications compatible with the iPad and the rest.

Have you been able to retain your readers?

In the last few years our sales have increased rather than declined. That of course is due to an increased number of Greeks who have arrived recently because of the economic crisis. How have we managed? From 1957 when the paper was first published the aim was to stay close to the community, listen very carefully to community needs…. this recipe has not changed up til now. We are trying to be an institution of our community not just a media organisation.

Do you see Neos Kosmos publishing an English–only print in the future? Will there still be room for a Greek print of the paper?

It’s a possibility, honestly I can’t answer that question. I mean 20 years ago we thought within 10 years Neos Kosmos would struggle yet here we are and stronger than then so I don’t know, it is a possibility. I mean if not many people speak or read Greek, but still have an interest in Greek community affairs, with culture, politics etc. there most likely will be a Neos Kosmos in English. But I can’t see that happening in the near future.

John Pyrros is a Master of Global Communications student at La Trobe University. You can follow John Pyrros on Twitter: @jap_90