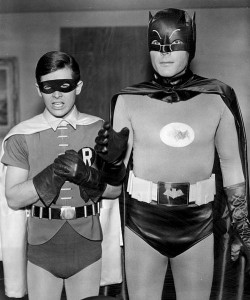 ‘Holy Horseradishes Batman, what did Christopher Nolan do to you?’
Souce: Greenway Productions via Wikimedia Commons

Darker. Grittier. Bad-ass. Anti-hero. Thanks to director Christopher Nolan, these terms are now synonymous with superhero films, and man, these movies are cool. In the wake of George Clooney’s horrific attempt at the Caped-Crusader in Batman and Robin, Nolan rebooted the Batman franchise in 2005.

The British-American director then did away with the cheesy, camp and daggy Bruce Wayne of the past and gave us, and the superhero genre, a completely new vision. Now, following the release of The Dark Knight Rises this year, Nolan’s Batman chapter has come to a close.

Since Batman Begins, people have been taking the superhero film genre much more seriously. When Robert Downey Jr. starred in Iron Man, the trend of the super-smart, suave yet dark and moody superhero continued.

But why do they work so well? Are these simply well-made Summer blockbusters, or something more?

The Dark Knight was a ground-breaking film. At the opening in 2008, the audience applauded when the final credits rolled. At first I thought that the residents of Sunbury didn’t realise that it was a film, and the actors on-screen couldn’t actually hear them. However, as the love for the recently departed Heath Ledger, who played the Joker, continued, it sunk in just how much people appreciated that this was more than just another big-budget superhero flick.

The Trilogy has to date made over $US2 billion at the box office. Batman Begins and The Dark Knight had nine Academy Award nominations (including two wins), as well as a number of BAFTAs, Golden Globes, MTV awards and other accolades.

Batman Begins and The Dark Knight are both in Empire Magazine’s 2008 list of the ‘500 Greatest Movies of All Time‘, placed at 36th and 15th respectively.

Critics generally loved the films. The Dark Knight is a ‘haunted film that leaps beyond its origins and becomes an engrossing tragedy’, writes Roger Ebert of the Chicago Sun-Times, that ‘creates characters we come to care about.’

‘The Dark Knight, and to a lesser degree Iron Man, redefine the possibilities of the comic-book movie,’ says Ebert. The genre itself now seems to necessitate a darker, edgier feel. This ‘shift of tone’ is now ‘being copied in varying degrees with reinventions of characters as diverse as Robocop, James Bond, and Red Sonja’, says Shawn Adler of MTV.

‘The Dark Knight is the best superhero movie ever made,’ says Anchorman director Adam Mckay. ‘I’ve seen others that try and strip away all the fun and the mythology. And then I’ve seen movies that go too far towards the cartoon aspect. But Nolan, with mathematical precision, blended the two.’

And while the films still look amazing, and pull off incredible action sequences, the story and the plot still comes first. ‘Nolan insists that his gargantuan blockbusters have complex characters, meaningful plots and do not sacrifice intelligence for more fireworks,’ says critic, Radheyan Simonpillai.

Yet not everyone seems to love Nolan’s Batman. The few lukewarm critical reactions to The Dark Knight Rises resulted in a number of nasty threats.

David Cronenberg, director of Cosmopolis, is similarly not a fan. He recently said: ‘I don’t think they are making them an elevated art form. I think it’s still Batman running around in a stupid cape.’

Cronenberg goes on to say, ‘But a superhero movie, by definition, you know, it’s a comic book. It’s for kids. It’s adolescent in its core. That has always been its appeal, and I think people who are saying, you know, “Dark Knight Rises is, you know, supreme cinema art,” I don’t think they know what the f**k they’re talking about.’

However, as indicated by their haul at the box office, the films have a huge fan base, many of whom seem quick jump to Batman’s defence. Nolan’s Batman films have clearly struck a chord in popular culture, but why?

I’ve spent countless hours talking with friends about how awesome and incredible the films are, yet we never seem to delve into why they work so well.

One idea is the non-fantastical approach of Nolan. Nev Pierce of Empire magazine says that ‘Nolan never really wanted his Batman to be “super” — instead, he posed what proved to be a compelling question: what if this were real?’.

Bruce Wayne never beams lasers out of his eyes, flies or uses any other supernatural powers. Instead he is superbly educated, wealthy and trained. While this is unlikely, it does create an idea that maybe it could really happen, as Watchmen writer and director, Zach Snyder highlights: ‘Batman is no longer a man in a suit. He’s us.’

Or perhaps it’s because Batman is so damn cool. Superman and Spiderman have both been successful franchises over the last 50 years, yet they’re so much harder to warm to. Bruce Wayne gallivants around Gotham City by day, just as smooth and clever as James Bond, who had a strong influence on Christopher Nolan. By comparison, Clark Kent and Peter Parker are just kind of nerdy.

Maybe Batman is a grand kind of escapism that just hits a special note. Or maybe it’s just that Nolan’s Batman connects so well with today’s world. The Dark Knight Rises is laced with references to the recent Occupy Movement, while The Dark Knight explored ideas of terrorism in a major western city.

Perhaps, just as Gotham City needed a hero, so do we. Maybe the idea of a vigilante stepping out at night to look after us, and being offered nothing in return, just sits right.

Whatever it is that Nolan has done right, these films will be remembered for a long time. David Koepp, writer of Jurassic Park, describes Nolan’s Batman films as this generation’s Godfather. ‘Great script, top-level performances … It just completely connected to something’.

Shane Palmer is a final-year Bachelor of Journalism student at La Trobe University, and a former member of upstart’s editorial team.