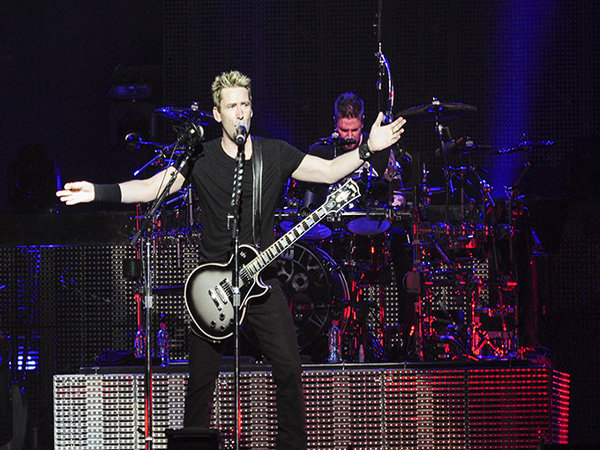 In the age of the internet where everyone has an opinion to share, Canadian post-grunge rockers Nickelback have built quite a niche for themselves; the most critically distained band in history.

Quotes like the one above uttered by a fake Dave Grohl Twitter account (now deleted) have helped cultivate the ideal that if you’re a fan of Nickelback, you must passionately hate them. What most critics and Nickelback haters fail to acknowledge though, is that despite how mainstream their music might be, Nickelback actually contribute to society.

In 2007, Nickelback released the single ‘If Anyone Cared’ from their album All the Right Reasons with 100% of digital sales from the single and video being donated to charity. All proceeds were donated to both Amnesty International and International Children’s Awareness Canada; both organisations being close to guitarist Ryan Peake’s heart.

Several years later in 2011, Nickelback again opened their wallets, this time donating $50,000 to a Canadian Children’s Hospital. Nickelback was challenged by a local band to donate the money, who was overwhelmed when they came through for the cause.

The band has also devoted their time to support many more causes like children’s education, anti-bullying campaigns, playing for the troops and guitarist Ryan Peake’s wife, Treana Peake, who has even started her own charity the Obakki Foundation.

So what did Nickelback actually do to deserve such an overwhelming volume of hatred spewed in their direction? Sure, their brand of over inflated, polished modern butt-rock and lyrical themes will turn off listeners, but that can’t surely necessitate the reputation they are stuck with.

An article posted this week on the music website Faster Louder has reignited the debate that surrounds Nickelback and by reviewing their new album No Fixed Address. The problem is that the album isn’t even due out until November, so Faster Louder have simply reviewed the album four months before its release date, in nothing more than a shameless attempt at click bait.

This article is just another link in the ‘hating Nickelback because it’s cool’ chain; it has been happening for years. Possibly, the best example was what took place in late 2011.

Nickelback had been announced to play a halftime set at the Detroit Lions football match, which lead to an online petition being signed received over 55,000 signatures. The petition began as a sign of advocacy for the local music scene; which quickly turned into a petition to sign if you disliked Nickelback.

The fan who stated the petition said, “This game is nationally televised; do we really want the rest of the US to associate Detroit with Nickelback? Detroit is home to so many great musicians and they chose Nickelback?”

This is a fair point considering why they chose to opt for a Canadian band rather than choose someone from the wealth of their home-grown musicians. But it opened the door for the Nickelback hatred train to continue rolling, and it did.

In 2013, Rolling Stone named them the second worst band of all time, only slightly nudged out by Creed. Yet the same critically tough magazine also reviewed their 2008 album Dark Horse and gave it 3.5/5.

Despite receiving supports from millions of fans and industry heavyweights like Chris Martin of Coldplay and R&B artist Timbaland, Nickelback remains largely a joke, no matter what they do.

Joe Hockey is a Nickelback fan. As if we didn’t hate him enough.

Chances are if you are a Nickelback hater or just hate them because its fun, their brand of music probably isn’t for you. So don’t listen to it. If they truly are the worst band of all time, then the statistics don’t match.

With having sold over 50 million albums worldwide, countless top ten hits and even being named the number one rock act of the decade by Billboard, from a critically standpoint they aren’t far from the worst. By those career achievements If Nickelback was a football player they would be considered elite, not the worst thing to ever grace a football field.

From sitting on the fence when it comes to Nickelback, yes their lyrics and delivery can be cringe worthy at the best of times, but isn’t it time we let go of some of this unfounded hatred?

But until that day Nickelback will continue going about their business as usual, copping flack and failing to be acknowledged for their charity work.

Joel Hargreaves is a third-year Bachelor of Journalism student at La Trobe University and is a editor for upstart. You can follow him on Twitter: @joelphargreaves