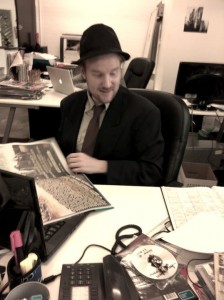 By the look of him you wouldn’t realise that Jaymz Clements is under pressure. Tall, hoodie-clad with a ready smile, he’s the epitome of laid-back. But as music editor for Melbourne’s largest street-press, Beat, he’s continuously under the pump. With a weekly run of around 35,000 copies and a readership of about 150,000 people, Beat is hard-copy proof that it’s possible to produce quality on a shoestring budget, but it’s a fine juggling act.

The weekly demands of Beat will see Clements regularly pulling late-night stints to ensure the magazine hits the pavement first thing Wednesday morning. Add in pressures of daily website maintenance, managing dodgy freelancers, sourcing advertising revenue as well as writing highly entertaining pieces himself, you can be forgiven for thinking Clements should be a man more perturbed. But it’s all in a day’s work for this red-headed lad from Ballarat who took the Beat helm almost three years ago. He agreed to take time from his busy schedule to talk music journalism, street-press challenges, and what it’s like chatting with Noel Gallagher.

Is music journalism something that you always set out to do?

It was probably about Year Nine [when] you have to start choosing your subjects. I always figured, I liked English, and I could always write a little bit better than everyone else. I thought about journalism very firmly from that point. In terms of music journalism though, coming from Ballarat you don’t really get exposed to too much of it. I was reading Rolling Stone, you know, Recovery magazine and shit like that, basically whatever I could get my hands on. Eventually the two of them combined as soon as I started playing guitar and playing in bands. Then I realised, hey, writing about music is actually awesome … it was a nice realisation.

What skills does a good music journalist need?

You need to have a unique voice. And I’m not sure how that comes about –  I always say that it comes about through practice and letting yourself speak, and some people can do that better than others. I don’t think there’s any real rhyme or reason behind it. It really is about being able to say what you feel and being able to get that across succinctly and sharply.

In terms of learning those skills it can be quite tough … You have to communicate to the reader, or even your editor, a certain specific idea about a band or about a night. And not everyone can do it … Having that voice is really the most important part, I think, of being a music journalist, or any sort of journalist.

How is music journalism different to more mainstream forms of journalism?

Obviously a lot of it’s opinion-based, and you’re not recording facts as a lot of other journalism would be. You really are getting across a subjective art form to a suggestive audience. There’s no absolutes, really, in music, and that can be a challenge – to get what is your idea, or your opinion, getting that message across to people. And obviously, having that sense of authority, which is one of the goals you should be aiming towards as a music journalist so that people take your opinion seriously. It’s a very authentic way of writing because a lot of the time it is just very much your opinion, so it’s hard to incorporate sort of a ‘formal’ way of writing. People will read it, and they’ll read it very informally a lot of the time … Being formal, being funny and being insightful all at the same time – it’s fucking tough! That’s because the subject matter is very fluid, and that’s how it goes. A music magazine is something very different to everybody.

What are the challenges of managing freelance journalists?

Not being able to pay them anything decent so that they want to do more and more work, that’s the big thing. There’s not really a gigantic amount of money in writing, so getting people inspired to write for you is probably the toughest part.

What act has been your favourite interview and why?

[Interviewing] Oasis ages ago was unreal. As a young man having grown up with Oasis, to actually talk to Gem Archer and Noel Gallagher at once was pretty electrifying. Even though they haven’t released a good album for eight years, it was nice to get a bit of insight into how they work.

Doing local stuff is good too, it’s good to sit down and have a beer with a band and talk shit.

I think probably the all-time favourite for me is this interview I did in one night … I interviewed Brent [Hinds] from Mastodon, and then Graham Coxon from Blur, and John Paul Jones from Led Zeppelin. I came out of that just fucking full of adrenalin, just shaking from how much fun it was.

What are the biggest challenges for street-press?

Probably sourcing revenue so we can keep putting out magazines. I guess for the last three or four years, with the downturn of record labels, and the amount of money they’re making and the amount of money they’re putting into marketing – that directly affects us, and what we’re able to do as street-press. Also getting Beat up online is a constant challenge, and has been ever since we launched the website about 12 years ago.

How important is social media for Beat?

It’s an easy way to reach a lot of extra people. Rather than putting a magazine out on the street and hoping people pick it up, you can actually just target the people who want to hear what you’ve got to say. You can communicate a lot quicker. And with our website, you get to push it out there straight away.

What would you do differently if you had an unlimited editorial budget?

Invest as much as I possible could in getting the single best writers I could … I’d be trying long form journalism as much as I possibly could … I’d love to be having 4,000, 5,000-word articles in the magazine, and having really great guest writers, paying my writers a really good wage to be pushing the best content they could and actually spending a lot of time on stuff. Making the magazine full colour, and all that sort of stuff, just making a damn good magazine, one you want to sit with, you want to read. You don’t want to just pick it up and flick through it. You just want to pick it up, you want to sit down and read gigantic, big fucking stories that are damn good as well.

What do you think is the future of print music media in an online world?

The magazines themselves will probably become more of a niche publication. I think we’ve seen Beat go that way in the last year-and-a-half. I’ve been constantly pushing to make it a very locally-focussed magazine … we’ve got people who love music, and the way they experience it is obviously locally. And people who are reading it are obviously in Melbourne, they don’t care what’s going on anywhere else, they just want to know what’s going on around them … so the magazine will become more and more Melbourne-focussed.

Renee Tibbs is a Master of Global Communications student at La Trobe University and is a former editor of upstart. Her blog is called duck down the alleyway. More details about the Working Journalist project can be found here.