A musical recording on an iPhone might not sound like the right kind of launching pad for a teenage pop sensation. But, for Melbourne’s seven-piece outfit King Gizzard and the Lizard Wizard it was exactly that.

The title track of their debut album, 12 Bar Bruise, was recorded with four iPhones scattered around a room.

The result; dirty old rock’n’roll with clear nods back to the surf/garage sound of the 1980s. 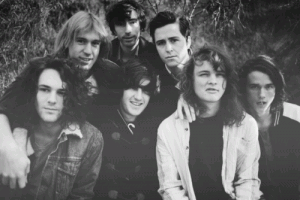 ‘We basically recorded the song as an experiment and thought it sounded really cool, then for ages we were like “we can’t put this on the record, it’s absurd,”‘ drummer Eric Moore says.

‘Once we mixed it properly and got it mastered it didn’t actually sound that different sonically to the others, so we added it on. Now it’s the song people talk about the most.’

Following the recent release of their debut album, the band hit the road with shows announced in Brisbane, Sydney, Hobart, Adelaide and their base, Melbourne.

‘We basically booked shows every weekend for two months and would come home during the weeks,” Moore says.

‘I think it would be a lot different for the heavy touring US and European bands who play every night for three months straight. Not sure if we could handle that.’

It’s hard to fathom that the band might not consider themselves suitably equipped for a three-month gig-playing bender. They reek of an outfit thriving on an appreciative audience.

Arguably, the band’s trademark is their on-stage performance. This is what generally separates the best from the rest. There is a reason the growing base of fans come back each night. The band’s frantic nature draws a crowd not for the faint-hearted or those easily bruised.

‘There is certainly a method to the chaos, but I wouldn’t say it’s pre-planned or anything,’ Moore says.

‘I suppose it’s just an unspoken thing. We all understand each other and have been playing together for years so it sort of comes naturally.’

This band has a knack for putting on a show, though their performance is far too unorganised to be staged. It is seven mates thrashing out tunes that easily please.

The quality of their music is not lost on the audience, even for the first-time observer distracted by the hoopla and bedlam that inevitably transpires.

‘We we’re all playing in different bands at the time and I think Stu had the idea of making a big rotating band of all our mates that was kind of loose and crazy,’ Moore says.

Arranging times and places to meet and practice that suited everyone presented problems in itself.

‘The first six months or so were tough to keep everyone interested and together, but once we started booking more shows and people started rocking up we realised we had something good going on.

‘Our single, ‘Dead Beat,’ getting playlisted for high rotation on Triple J and being booked for Meredith really early on … whipped us into line.’

With a low-key beginning yielding little expectations from the band themselves, a few had their fingers in musically-similar pies. With Moore and Walker a part of Love Migrate and singer and harmonica extraordinaire Ambrose Kenny-Smith fronting The Murlocs, there is a great potential for a scheduling disaster.

Moore also founded the three bands’ record label, Flightless, leaving him with a lot on his plate.

‘It seems to work out well because we can juggle our schedules and calendars around each other’s bands. But I suppose the number one priority at this stage is Gizzard,’ Moore says.

‘It ebbs and flows. We will have a quiet period early next year when The Murlocs release an album.’

A well-earnt break might be on the cards for the band, after a year so busy few of them may have expected. Although many of Gizzard’s members have been best mates for long before they were unleashing anarchy within sweaty, Melbourne pubs, time apart may be needed.

‘I know it sounds cheesy but not really. We are actually all just best mates,’ says Moore.

‘I think maybe the only thing we would be disagreeing about [is] what instruments should go where on each track, or how the mix should sound. Guitarists always want to hear more of themselves, you know?

‘Bands that work hard and don’t skip a step are always smarter and well-rounded when it comes to making big decisions.’

It is the kind of confession one might expect. King Gizzard and the Lizard Wizard are to be taken as seriously as the name fails to suggest. It is seven mates rocking an establishment down to its loins, to the last cigarette butt on the floor and the last half-empty beer glass left on the bar.

For Gizzard, the glass is certainly half-full, but for Moore, managing the band may not be as complicated as managing to get the most out of an unorthodox seven members.

‘I think early on it was a bit ridiculous and a bit of a spectacle, but over the last few years we have worked really hard to try and incorporate seven instruments into our sound. I think at the moment it’s working really well,’ Moore says.

A sold out album launch at The Tote in Collingwood was a testament to that.

‘We’ve tried practicing and writing as a seven-piece and it just doesn’t work. Essentially Stu will come up with a basic idea and we will jam it as a three or four-piece, then we will add the rest over the top.’

With summer festivals at Queenscliff, Falls in Lorne and New Year’s Eve at The Esplanade Hotel lined up, 2012 may finish with a bang, eclipsed only by the ruthless drum lines to be found throughout the debut album.

‘And we’ve got a new album due for January, so no sleep for the next few months.’

For a similar effect, take yourself and a group of friends not fazed by musical madness to one of King Gizzard and the Lizard Wizard’s gigs. They refuse to disappoint.

Justin Falconer is a first-year Bachelor of Journalism (Sport) student at La Trobe University. Follow him on Twitter: @jfalconer6.