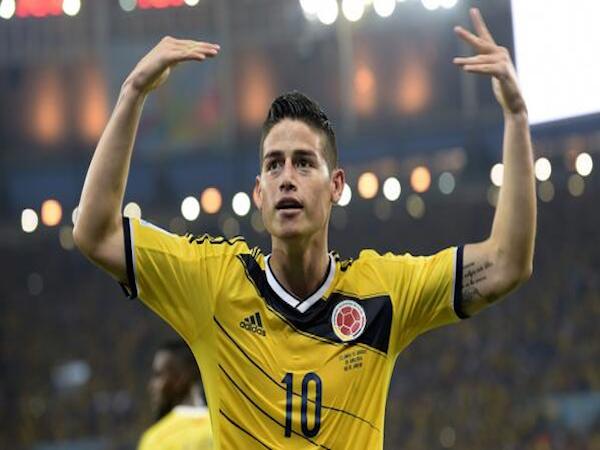 When Pele burst onto the scene as a 17-year-old at the 1958 World Cup, it began a long tradition of players making their name on football’s biggest stage.

Now, in 2014, Colombia’s James Rodriguez is the latest in a line of youngsters to do exactly that.

And while many may question whether comparing Rodriguez and Pele is a stretch too far, they are claims the baby-faced 22-year-old is all too familiar with following a stunning campaign in Brazil.

When Rodriguez struck a remarkable brace as Colombia saw off Uruguay 2-0 in the round of 16, it left Uruguayan manager Oscar Tabarez hailing the midfield playmaker alongside the all-time greats, including Diego Maradona.

“I’ve seen him play for a while,” Tabarez said after the match. “He arrived in Argentina at 17 and showed he was a talented player.

“Those who do things that have nothing to do with life experience – Maradona, Messi, Suarez – they do things because they have certain gifts that make them special.”

James Rodriguez put on a show against Uruguay. Can Colombia take out Brazil next? WATCH RECAP: http://t.co/kq1iBOp7pN pic.twitter.com/v1Q1Vi4a9x

A balanced, two-footed and naturally gifted footballer, Rodriguez has lit up the World Cup, reflecting the Colombian attitude in Brazil by playing with the perfect mix of passion, flair and maturity.

In fact, it may have even been Falcao’s injury that enabled Rodriguez to flourish in the way he has thus far at the tournament.

Falcao’s absence has forced manager Jose Pekerman to thrust Rodriguez into the middle from a wide position where he could easily be stifled of space and time on the ball.

Now, he is able to roam in between the lines in front of opposition defenders, creating holes to operate in and work his magic.

Indeed, it was in these pockets of space that Rodriguez found the room to score one of the best World Cup goals in recent generations against Uruguay in the round of 16.

Controlling a lofted pass on his chest, the youngster had the awareness and calmness to swivel and hit a swift, one-motion volley that emphatically crashed off the underside of the crossbar.

“He’s the best player at the World Cup,” the Uruguayan manager claimed. “I don’t think I am exaggerating.”

A goal in the second half, doubling Colombia’s lead and easing them through to a quarter final showdown with Brazil, took Rodriguez to five goals in four matches – each one celebrated with a now-traditional Colombian dance.

Along with shifting the 22-year-old to the top of the Golden Boot leaderboard at the World Cup, it also saw him become the first player to score in each of the first four World Cup matches since Rivaldo and Ronaldo in 2002 – even more esteemed company that Rodriguez finds himself in.

But it’s not just by scoring in which Rodriguez has significantly helped Colombia at this World Cup.

Against Greece, he provided the dummy that enabled Pablo Armero the space to score the opener. He also whipped in the corner which Teofilo Gutierrez diverted home. He then swept home the third, scoring his first World Cup goal in the process.

Against Ivory Coast, he showed his aerial prowess, thumping home a header to open the scoring. He then highlighted the industry that adds to his incredible natural talent, winning back possession with an uncompromising tackle, before beginning the counter that led to Juan Quintero’s second.

Against Japan, he only played 45 minutes, coming off the bench at half time, yet he was still close to being awarded best on ground honours. He twice played Jackson Martinez through on goal as the South Americans stormed into a 3-1 advantage.

That was before he sealed the 4-1 rout with a sublime individual effort, shaking off one challenge and delightfully chipping the ‘keeper with an immaculate touch.

And against Uruguay in the round of 16, you all know what happened next.

10 score involvements from 10 goals scored while Rodriguez has been on the pitch – it’s no wonder he’s being widely acknowledged alongside the likes of Pele and Maradona.

But it was a breakout tournament that was to be expected for the 22-year-old.

After leaving the comforts of South America for Porto in 2010, Rodriguez won three Portuguese league titles in his first three seasons. To add individual honours on top of this remarkable feat, he was also awarded the Portuguese Player of the Season following the 2011/12 campaign, aged just 20.

He’s since completed €45 million move to AS Monaco, where he notched the most assists in the competition, was awarded Monaco’s Player of the Year and named in the Ligue 1 Team of the Season.

In a World Cup described as one of the most exciting ever, Rodriguez has been the focal point of everyone’s enjoyment.

Against favourites and host-nation Brazil tomorrow morning, the challenge for the Colombian youngster and his teammates grows harder once more.

But who could rule out the possibility of yet another trademark Rodriguez jig at some point throughout the match?