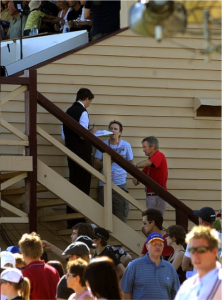 Leigh Rogers on the job at the Stawell Gift with ABC journalists Ian Cover and Gerard Whateley. Photo: The Wimmera Times Mail

‘Got asked by a journalism student today to help them with an assignment. They need to interview a real journalist #ivemadeit #imarealjourno,’ he tweeted.

Yet having worked for The Wimmera Mail Times for three years, completing a brief stint writing editorials for Tennis Australia, and with a Cricket Victoria Award to his name, it would seem Mr. Rogers, 23, ‘made it as a journo,’ quite some time ago.

Last year his cricket coverage for the Mail Times was recognised by Cricket Victoria, winning best news story or feature in country Victoria. He was also nominated as a finalist in the 2011 WorkSafe Victorian Country Football League Media Awards for his netball story: A pathway to friendships.

What inspired you to pursue a career in journalism?

I always loved writing, even in primary school. In grade six, my teacher set me extra homework, researching and writing articles. I think that was what really sparked the passion for me.

Then, in January 2005, my family’s farm in Telangatuk East (a town in South West Victoria, near Horsham) was badly burnt by bushfire. 90% of the property was burnt, although a neighbour managed to save our house. The next day, there were helicopters and reporters everywhere, and they showed very little respect for those of us that had just suffered so much loss. I was put off journalism for quite a while after that because I had seen the ugly side of the industry.

Did this experience shape the way you go about seeking interviews with those that are grieving, or have experienced a recent trauma?

Yes. Working as a journalist, I’ve now been on the both sides of that fence. I’ve had to do grief knocks. I remember one in particular, there was a car accident, a man had died and I had to ring his family the next day and ask if we could do a tribute piece, painting a picture of the sort of person he was. Speaking to the grieving wife was very difficult; I felt pretty ordinary doing that. However, the family were very good; they provided a photo and were willing to speak to me. Situations like that raise some difficult ethical questions. When you’re working with a grieving family, I personally believe there are circumstances where it can be acceptable, and a general courtesy, to let them read the content before it is published. They’ve been through enough, they shouldn’t be stressing about what you’re going to print about their deceased loved ones.

From my personal experience, many journalism students seem to feel quite anxious about their potential to find work in the industry after they leave university. How did you find your job, and do you have any tips for graduating students looking for work?

Based on the attitudes I encountered when I was at university, I never really expected to find work in the industry. I was actually considering going back to uni to do a Diploma of Education, because I was concerned that it would be really difficult to find industry work.

However, there was a senior journalist job going at the Mail Times and my parents encouraged me to apply. I didn’t feel I had the experience to apply for a senior position, but I dropped my resume in on the off chance. An hour later I received a call from the editor asking me to come back in. Apparently one of the junior journalists had quit minutes after I called! So I raced in for the interview, although I wasn’t at all prepared or even dressed appropriately. But that night I got a call back and was told, ‘you’ve got the job.’ I think you just have to be willing to make that push from the start and to really put yourself out there.

What does your typical workday entail?

I start work at the Mail Time at 9am. Monday, Wednesday and Friday are our publication days. The Friday paper is roughly 80-100 pages and content is locally based; we don’t cover the AFL or use outside sources like the AAP. People turn to us for local news; if they want national news, they’ll go to a different source.

We have seven journalists and most of our team is very young. It’s a great place to cut your teeth, because you’re working with a young group and you’re all learning from each other.  We all get on socially and spend time together outside of work hours. I actually live with two of my colleagues. You could say that in terms of a daily routine, it’s pretty full on: it’s really a lifestyle.

How did you find the transition from university to the work force?

I was really thrown into the deep end. Being a small paper we don’t have the resources for people not to pull their weight. It forced me to very quickly develop my skills and adapt to working to a deadline. I think I probably learned more in that first month of work than in my entire journalism degree. Although university was fantastic in that it helped me develop socially and become confident in my skills, that hands-on experience of working in a newsroom is something that really can’t be taught.

What have been some of the highlights of your career so far?

I think the first story I had published was about the local Lions club having a garage sale for charity. It certainly wasn’t front page, but every time I saw a by-line with my name, it was a pinch myself moment.

The Stawell Gift is fantastic to cover, I’ve done it for the last three years, and it’s become one of my favourite days of the year. It’s exciting because you get to be in the media scrum with The Age, The Herald Sun and Channel Ten. It’s very different to what you generally experience working at a regional newspaper.

In January this year I took a casual three week volunteer job with Tennis Australia, writing editorial for the official Australian Open website. I had the opportunity to interview players like Daniela Hantuchova, Sabine Lisicki and Bernard Tomic. Tomic was really tall: he made me feel short, and I’m six foot three! It was the best three weeks of my life; it was just an amazing experience.

What are your dreams for the future?

I love writing about sport, but at the same time I want to keep my options open in terms of being able to write about anything, from sport to politics. Having said that, I don’t even know where I’ll be in a year.