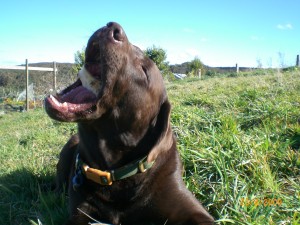 Moose having a field day

With my pal Rocky releasing his book this weekend, I thought it was time I tried to stop fetching the paper and become a New Media Lab. So this week I signed on to Twitter as LabradorMoose.

It didn’t take me long to mark my territory. Despite protestations from my human assistant Lawrie (who reckons he’s got something to do with upstart) I simply just looked up the word “Labrador” in “Find People”, and bark me down, it looked like every man and his dog was on there. Well, more dogs than humans, actually – although I also started following quite a lot of people whose last name was Labrador, including a politician in Idaho, and I even tried to sign up for a Labrador and Newfoundland journalism camp (though what on earth do Newfies know about journalism?)

By the end of the day my follow count was up to 61 – which is more or less what happens every time I have a walk in the park or sit outside a restaurant – and by this morning I had 16 followers. These include a chocolate Labrador/Border Collie bitza  called Hazel from Braunschweig, Germany, who looks very fetching (at least I hope she can fetch). She’s got more than 500 followers, and no wonder, with tweets like “Ich hab heut noch gar nicht meinen Freund Lucky gesehen”.

My other new friends include HundetrainerB from Hamburg (I’m so looking forward to going to Europe now) and LabradorJobs, whohave already sent me back a direct message obviously written just for me that said: “I hope you find all the jobs you are looking for. I update every day.” Great! Just remember I never want to be a guide dog.

Of course, there’s a lot to learn and sort out, but everyone’s so helpful. When I put it out there that I wanted to figure out how to retweet a dead bird, it was picked up straight away by Tweetshelp, and I found thousands of other potential playmates on DogsWhoTwitter.  The only downside so far is that it turns out you don’t get anything to eat at all when you sign up to RSS feeds.

My conclusion so far is that Twitter is just jumping on the bandwagon of something we Labradors doing ever since we fished ice out of the frigid Atlantic – making friends with everyone you’ve never met. Or is that Facebook? Yes, I’ll set up that page later on. Right now, I just want to know what my chances are of getting on Hungry Beast next week?

Moose (http://twitter.com/LabradorMoose)  is a seven year-old chocolate Labrador in Melbourne, who lives with his daugher Elka and who also has a webpage that badly needs updating.