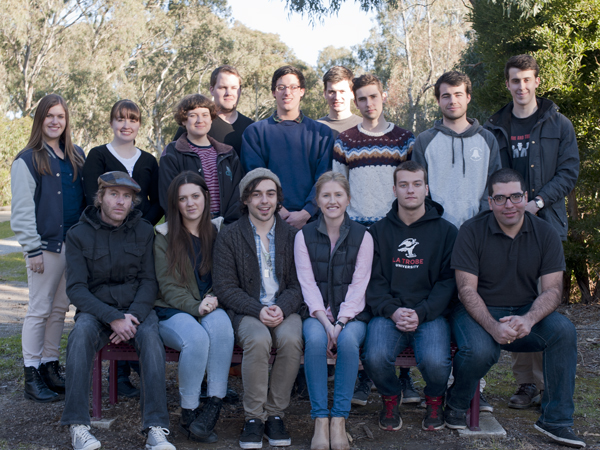 After a week of some down time caused by server issues, upstart is back up and running.

And it’s that time of year when we introduce the new team that will run our  publication for the months to come.

Alice Piper is a third year Bachelor of Journalism student and the Editor of upstart magazine. Alice is a lover of all things fitness, fashion, cooking, health and AFL football. In between reading about the newest super food, you’ll find Alice hovering over her computer writing her own take current affairs. Alice’s goal in her professional career is to become a foreign correspondent, reporting back to Australia from wherever the news takes her. You can follow Alice on Twitter @PiperAlice.

Campbell Elmer is currently in his third year of studying a Bachelor of Journalism at La Trobe University. His passion for journalism stems from a desire to see the world (and brag about it), having lived, attended school and worked in northern Melbourne his whole life. When Campbell isn’t slaving away over history essays and contributing to his thrilling political-analysis blog Pollywatch, he works as a swimming instructor and writes short stories. Ever the adrenaline junkie, Campbell’s dream job is to work as a foreign correspondent in a warzone. You can follow his thoughts and endeavours on Twitter: @CampbellElmer.

Liam O’Callaghan, Politics & Society co-editor
Liam O’Callaghan is in his last year of a Bachelor of Journalism degree at La Trobe University. He is an avid follower of sport in Australia and abroad, including Australian rules and American football. He was a staff writer at upstart for the first half of 2014. After a semester at the University of Oregon, Liam has developed a passion for travel and aspires to take his journalism career across the globe covering politics and conflict. You can follow him at @ocallaghan93.

Sam Ord, Politics & Society co-editor
Samuel Ord is a third year Bachelor of Journalism student at La Trobe University. Sam has had a deep passion for writing since early childhood, and having spent his entire life living in the North Eastern suburbs of Melbourne, he looks forward to using journalism as a vehicle  to get out and explore the world. During the week you can find Sam having a kick at his local football club at which he has played more than 250 games, or at home polishing up his media skills and following the political scene. Follow him on Twitter: @SamuelOrddd.

Sherydan Fitzgerald, Fashion & Lifestyle Editor
Sherydan Fitzgerald is in her final year of a Bachelor of Journalism at La Trobe University. Sherydan grew up in the country town of Mildura, and moved to Melbourne in 2011 to achieve her tertiary education goals. Sherydan is a coffee and social media enthusiast. She aspires to one day be a writer and news journalist. You can follow her on Twitter:@SherydanFitzger.

Callum Godde is in his third, and final, year of La Trobe University’s Bachelor of Journalism (sport). A country lad, he relocated to Melbourne aiming to, eventually, land his dream job – getting paid to watch sport. In addition to his role with upstart, Cal is a media coordinator at VFL club Box Hill FC. Cal has a tendency for pessimism, and can, at times, be overly critical. But, in the main, his polarising views are driven by his passion for sport. You can follow him on Twitter: @calgodde.

Joel Hargreaves, Etc Editor
Joel Hargreaves is currently completing a Bachelor of Journalism degree. Growing up in the country town of Wangaratta, he moved to Melbourne in 2012 to follow his hopes of being a journalist. Joel has blogged for Optus as a Sound Scribe and currently contributes to the Australian Musician Network website. When Joel isn’t writing he is either listening to music or being an avid Carlton and Minnesota Timberwolves supporter. Follow him on Twitter: @joelphargreaves.

Sam Trask-Marino
Samuel Trask-Marino is in his final year studying Bachelor of Journalism at Latrobe University. He has always been a passionate writer and enjoys writing short stories almost as much as he enjoys reading them.

Ultimately he aims to be able to write and travel simultaneously and is interested in literary reviewing.
Away from the hustle and bustle of University life and work Samuel enjoys reading old sci-fi books and watching cheesy foreign films.  You can follow Samuel on Twitter @SamTraskMarino.

Tom Parker
Tom Parker is in his last year of a Bachelor of Sport Journalism degree at La Trobe University. A staff writer for upstart magazine, Tom’s biggest interests lie in all things sport. He plans to one day combine both his profession and travel-bug in one, covering sports all over the world. After securing a media role at the 2014 Asian Games, Tom is one step closer to achieving his dream.

Luke Costin
Luke Costin is a third year Bachelor of Sport Journalism student at La Trobe University. As full-time news junkie, Luke is always wired into what happening in Australia and around the world, whether it be sport, politics or otherwise. Not just a fan of the written word, he enjoys telling stories with video and looks forward to providing the upstart audience with engaging content. When he finds captivating content on the web, he tweets about it @LukeCostin.

Erin Leeder
Erin Leeder is in the second year of a Bachelor of Journalism at La Trobe University. She has an interest in film, culture and fair trade and currently blogs, tweets and posts for Seven Women, a small not-for-profit organisation. A recent trip to Nepal has created a dream of getting into travel journalism, but honestly, Erin would probably be happy anywhere where she can write and drink copious amounts of tea. You can follow her on Twitter at @155erin.

Meaghan’s passion for music was cultivated at a young age, the result of a nutritious diet incorporating The Style Council, Australian Crawl and Saturday night viewings of rage. Halfway between the mosh pit and the bar on a weekly basis, she currently contributes a range of articles to leading music website Tone Deaf. You’ll also find her immersed in the latter – seeing how many Kamahl records she can find in one op-shop and her ongoing (and highly emotional) search for the best vegetarian udon in Melbourne. As part of the new upstart team, Meaghan aims to bring some fresh, entertaining content to the plate. You can follow her on Twitter @meaghanweiley.

Philippe Perez is currently studying a Bachelor of Journalism at La Trobe University. He is a self-confessed radio addict and contributes to programs on SBS Radio, 3CR, 3RRR and Vision Australia Radio. When he isn’t in a studio, he is making short audio documentaries for All The Best. Philippe also writes for music and culture website The AU Review and is always up for a nerdy chat about music. He is also an avid book reader, and when his head isn’t in the radio, it’s within the latest release section at your local bookshop. Follow him on Twitter: @p_perez.

Rikki-Lee Burley
Rikki-Lee Burley is a second year Bachelor of Journalism student at La Trobe University. She recently completed an exchange semester at the University of Missouri’s School of Journalism. During her time abroad, she wrote for the local Vox magazine’s blog and was a reporter for the NPR affiliate radio station, KBIA. When she’s not trying to keep up with the fast-paced news industry, Rikki-Lee spends her time in dance and singing studios both as a student and a teacher. Lifestyle and service journalism are her primary interests, and she would love to write for Cosmopolitan one day. You can follow her on Twitter: @RikkiLeeBurley.

Rick Whateley
Rick Whateley is a freelance writer and La Trobe University student who lives in Castlemaine. He has previously been involved in professional writing for local government and businesses and is closely involved with the Lithuania Tribune, where he is a copy editor. As a new contributor to upstart’s Politics and Society section he is keen to tackle the issues of our times head-on. He has previously studied Politics and Sociology, and is currently completing an MA thesis on the controversy surrounding the planned mosque development in Bendigo.