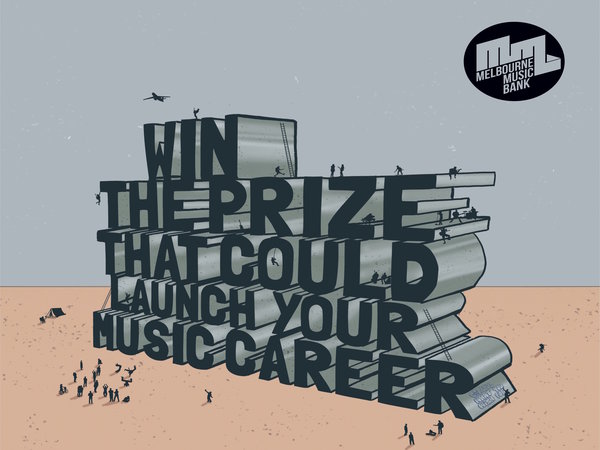 The Melbourne Music Bank is open to all Victorian musicians and songwriters.

This year’s competition is set to be bigger than ever.

The event is run by the Bank of Melbourne. It aims to increase community involvement and help develop Melbourne’s growing music industry.

Jac Phillips, Head of Brand and Marketing at Bank of Melbourne, tells upstart that the competition hopes to inspire Melbourne musicians.

“The idea behind the Melbourne Music Bank is to build a signature event that supports the music makers of Victoria because we understand how difficult the industry is to break into,” he says.

“We’ve got a very clear mission, and that is to help people make it.”

Last year, musicians had to submit a song with a theme relevant to Melbourne. This year, contestants can submit any original piece.

Four finalists will be chosen by the public to fight for the crown at The Arts Centre Melbourne. A panel of experts, which include industry professionals from radio and PR, will then determine the winner.

Melbourne singer/songwriter and ARIA Award winner, Ella Hooper, tells upstart about her return as ambassador to the competition.

“Being a muso on the make is incredibly hard work, and takes a lot of gigs, emails, blood, sweat and tears,” she says. “These amazing inroads and opportunities will only create more of that for you.”

The prize pack is worth around $30,000 and will set one person on the right path to their ultimate music career. Prizes include:

And finally, the winner’s song will be featured in a future Bank of Melbourne commercial.

“A musician these days needs to use everything they can to get that foot in the door and get their goods to the people. Having a well thought out, impressive complete package is absolutely going to be your best bet in achieving notoriety,” Hooper says.

2014 Melbourne Music Bank winner, Heloise, tells upstart that winning the competition has given her the determination and confidence to further herself in the industry.

Video clip of This is Home from Melbourne Music Bank 2014 winner, Heloise

“The Melbourne Music Bank initiative has been such a great starting point,” she says. “It’s helped me define the direction I want to take in music and has given me a glimpse of what having a career in the industry could be like.”

Since winning the competition, her single This Is Home received airplay on multiple radio platforms including triple j, ABC, BBC UK and many other community radio stations. She has gigs lined up for the rest of the year and plans to release her second EP as well as a tour.

“The prizes were extremely useful. I have tools now that I otherwise wouldn’t have had access to,” she says.

Entries for the competition will close Sunday August 23 at 5pm AEST.

Jena Marino is a third year Bachelor of Journalism student at La Trobe University. She is also the creator of Melbourne music blog, The Real Songwriters of Melbourne, which you can check out here.