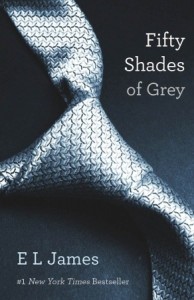 But how has this phenomenon occurred? There are plenty of examples of bad writing achieving phenomenal success, but 50 Shades has eclipsed them all. What’s even more extraordinary is that the success was largely achieved without the assistance of a publishing company. Publisher Random House  came on board only after the book had become the must-read novel of the year.

Although plenty of people are scratching their heads at 50 Shades of Grey’s success, understanding the trajectory of the book is fairly straightforward: the power of word of mouth meets the global reach of social media.

When I was in early high school the must read book was Kathy Lette and Gabrielle Carey’s Puberty Blues. Copies of the well-thumbed novel were passed between friends and hastily hidden from prowling nuns down the bottom of school bags, under mouldy sandwiches and squished bananas.

The appeal? A subject we were all interested in, a naughty read and the understanding that if you hadn’t read the book you couldn’t be part of the conversation. At some point, not having read the book became a quick road to social exclusion.

50 Shades of Grey has achieved the same result on a global scale, and like the teenage girls at my high school, author E L James started with a community of readers with a shared interest.

Beginning its life as fan fiction, 50 Shades of Grey was inspired by the characters of Bella and Edward from the Twilight series by Stephanie Meyer. By writing about characters for which there was already a huge fan base, James had a ready audience of willing readers. To massively simplify the process – the story soon took on a life of its own, the characters moved away from their Twilight inspiration, and a book was born. Originally an e-book, 50 Shades of Grey is reported to have sold 550,000 copies  faster than any other paperback including J K Rowling’s Harry Potter series and Dan Brown’s The Da Vinci Code. More than 20 million copies have been sold worldwide.

While E L James has won the equivalent of the literary lottery, there’s hope for many writers in the story of her success: If you want your book to be read find your community of readers and share your work with them. Whatever subject you’re interested in – there’s bound to be a group of like-minded people gathering somewhere, either online or in person. Don’t be afraid to test your work on an audience and respond. Writers do their work alone but the end purpose is to find a readership – whether it’s a small local writing group or a global audience.

With self-publishing now an easy option for all writers, getting a book deal is no longer the only way to get your work out there. Like almost every aspect of contemporary culture and media today, traditional gatekeepers are losing their hold on what we watch, read and listen to.

50 Shades of Grey may seem to have appeared on the best seller lists out of the blue, but there’s no doubt many writers and publishers are closely analysing its success. And it’s a fairly sure bet that more best selling novels will emerge from the realms of self-published writers as we rely more on what our friends are ‘liking’ for recommendations than on traditional reviews.

And if all else fails of course, you can always write about sex.

Justine Costigan is a Master of Global Communications student at La Trobe University. You can follow her on twitter: @justcostigan