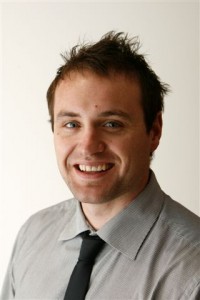 It wasn’t the most direct road but Niall Seewang is doing just what he wanted.

In high school Seewang’s careers advisor suggested he study something else before getting into journalism, which led to a human movement degree. Four more years of travelling, in the UK, US and Caribbean followed, before returning to study a Graduate Diploma in Journalism at La Trobe University.

While he does wish he had gotten into journalism earlier, Seewang is making up for lost time. After La Trobe he moved to Albury-Wodonga to take a cadetship with the Border Mail, where he excelled in the sports department for three years. This week, he’s commenced a new job at the Hobart Mercury.

This past season Seewang won a Cricket Victoria award for his coverage of the Australian Country Cricket Championships. If that isn’t enough, he also co-hosted The Critic – a sports chat show on 2AY every Saturday morning.

He spoke to Evan Harding about the difficulties he’s encountered and the sacrifices he’s made for the sake of his craft.

What were the toughest challenges you faced when you moved to Albury-Wodonga?

Nothing prepares you for the helter-skelter life of working as a reporter on a daily newspaper. That took me a long time to get my head around, the fact that you’re not working nine-to-five, if you’ve been working a nine-hour day and something breaks and you’re the only one there then you’re going to be at the office a lot longer, and you’re working evenings, Saturday and Sundays and so forth as well. But once you surrender to your career and that’s what you want – which is exactly what I want – it just seems like part of the territory and you don’t really have to think about it anymore.

You did a work placement at The Age recently. How did you find that experience?

Absolutely brilliant, I loved every second of it. When I was a young kid of 14 or 15 my dream job was to be a sports writer at The Age. And that’s what I’m hoping to achieve in the next few years, to make my way down there. It was so different because it’s got so many more resources. Up at the Border Mail I was part of a five-person team in the sport department, and at The Age they’ve got maybe twenty and then they’ve got contributors, panellists, columnists and freelancers as well on top of that. At the Border Mail you’re doing five or six stories a day minimum to fill the paper up, and there you might go a couple of days without putting anything into print because you’re chasing something big, and I found that a huge difference.

Do you find it frustrating when you don’t get the chance to put as much time into a story as you’d like?

It definitely can be. You’d love to be able to spend the amount of time on a story at the Border Mail as you would at The Age, but then the sports section of the Border Mail would be two pages instead of twelve. So it’s just a necessary evil. I’m sure I’ll look back on my time at the Border Mail with fondness because it really does drive you and make you a very efficient journalist. If you have to write five stories a day and you don’t want to spend 20 hours at the office each day you really do become very efficient with the way you gather news and put it all together.

There has been a lot of talk that the world is getting smaller and news has to become more localised. Is that something you’ve noticed?

Not really. Because I’ve only been working for three years, it’s been there from day one for me. I’m sure if you ask people who have been journos for 10 or 20 years they would have noticed a massive difference. It’s just been this way for me since I started.

How do you compare your work to those more established writers?

I would like to think I will get to their standard in the future but I still consider myself quite an amateur in the grand scheme of things. I consider their writing to be more in-depth. I often just scratch the surface, I think, and don’t delve deeper. Part of that might be because I don’t have time to just concentrate on one story for a day or follow a story for a couple of days even… I can’t wait to break into a bigger market and chase meatier stories as well.

Are there any journalists you particularly admire?

Greg Baum and Peter Hanlon from The Age. Even when they’re writing about sports that aren’t terribly interesting I can hang on every word. [The ability to draw the reader in] is a great skill to have and one I’d love to be able to develop. And when you are writing on sports you don’t particularly love – and this is probably a difference between me and those great writers – I struggle to find the passion to write about something I’m not 100% interested in and they seem to be able to do it and use really evocative language and you keep on reading regardless of what they’re writing about.

You play cricket in the summer and occasionally have to report on your own league. What’s that like?

It certainly poses some problems and some difficulties, within my club and outside as well. If anything I’m probably too harsh on my own club because I don’t want to be seen as biased. I’ve had a few complaints from within the club that I’m a little bit too negative about us if we have a bad loss. Within the competition everyone knows that I play and you don’t want to be shit-stirring as an opponent, I’m there to do a job. And I get sledged on the field a lot if I wrote a story about the club I’m playing on the weekend, it’s normally good-natured but it brings with it problems on the field and off it as well.

Have you had to put yourself in an article?

Not yet. There probably have been times when I could have mentioned myself but I’d much prefer not to. I haven’t made a century up here in the couple of years I’ve played so I wouldn’t want to mention myself until I did something really, really outstanding and even then I would probably get one of the other sports boys to do it under their by-line rather than myself!

You’ve just scored a new gig at Hobart’s daily newspaper, The Mercury. What will your role be there?
My new role will be sports sub editor, which involves subbing sports copy and laying out sports pages. It’s dramatically different to writing, and something I have no experience in doing (well, the layout part anyway), so it will be a challenge to learn a new set of skills. I’m being trained for eight weeks before I get stuck in, so hopefully that will prepare me for the new role.
What’s it like being back in your home state?
It’s great to be back in Hobart actually. As far as the work goes, well, one day isn’t much to go on but it seems to be an interesting place to work – a few minor differences are the more relaxed dress code (I was the only person wearing a tie yesterday!) but other than that it seems fairly similar to newsrooms at the Border Mail and The Age.

Do you have any wider career goals or aspirations?

My wider career goal is to get a gig at a metro paper and I think I will be a career newspaper sports journalist. It’s quite scary to think, say if I got a gig tomorrow at The Age, or The Australian or the Herald Sun that I would be doing that until I retired, in 35 years or something, but that’s literally what I want to do for the rest of my life so once I do that I will be really happy.

Evan Harding is a Master of Global Communications student at La Trobe University and sport editor of upstart. More details of the Working Journalist project can be found here.