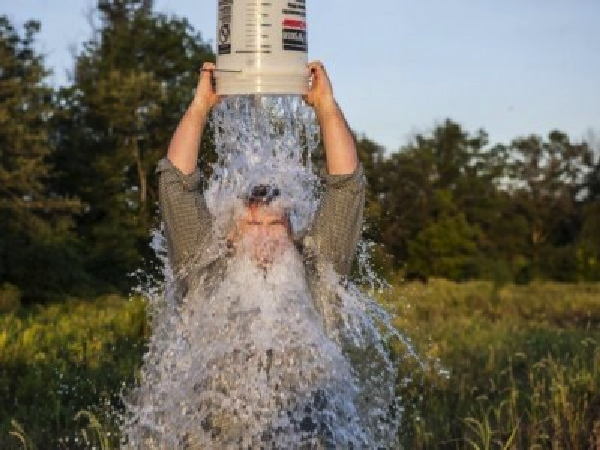 As far as viral sensations go, the Amyotrophic lateral sclerosis (ALS) ice bucket challenge is entertaining to watch, but mostly from the comfort of your warm, dry, seat.

The folks at Know Your Meme have everything down pat in terms of the origins and history of this phenomenon where people put themselves through the torture that is pouring icy cold water over themselves. What the page doesn’t answer is why people choose ice water in particular.

Your guess is better than mine, and that lies in the heart of the inane nature of the whole exercise. It sure is a thrillingly entertaining way to waste time though.

For instance, there is always the danger of the bucket stealing the show:

But yes, while we all rousingly laugh at these silly folk, it is sometimes forgotten there are a bunch of charities involved with this challenge (and trying to lay claim to own it by trademarking the challenge). It thus leads to self-important videos like this one.

Celebrities are getting in on the action too, which is worrying. I can hear the strained groans from behind computer screens as each celebrity video becomes increasingly more vain.

This all comes in the form of name dropping other celebrities or trying to out-do the challenger’s original video. Some celebrities, in their videos, don’t even mention ALS. But why should we be surprised? Anyone remember the #NoMakeupSelfie?

A beacon of light, however, can be seen through all this icy murk. It’s nice to know in that others haven’t given into the exercise and actually have used the opportunity to point out flaws with the challenge.

This meme sums up what I think of people accepting the Ice Bucket Challenge. People are stupid. #droughtshaming pic.twitter.com/ENp6NO7wuA — Robert (@BertimusPrime86) August 19, 2014

This whole ice bucket challenge had nothing to do with ALS when it first started, and more to do with just doing something silly amongst people who wanted a bit of fun. We can’t blame them for that to be honest. Let them have their dumb water-wasting fun. As long as they’re careful, of course.

The harshest of the criticism, however, has come from those who see it as a waste of time. Daredevils, vegetarians and wrestlers alike are coming together to simply say “no” to the challenge for valid reasons. I never thought I’d agree with those who either get naked, get hurt or pretend to get hurt for entertainment, kudos to them.

The one thing that I take strength from all this malarkey, is I’m expecting that once the viral hit fades away into existence, another fulfilling exercise engaging in narcissism will take its place and spread through Internet.

Many other social causes who affiliated themselves with an internet craze before the ice bucket challenge have seen the same fate.

Here in Australia, days like Red Nose Day and Jeans For Genes Day are examples of charities raising awareness that look to be taking on a type of branded mentality on a year-round basis. While not fully incorporated into some weird internet craze, there is a marketing palava to them that irks me and makes me wonder about society in general.

We accept them as worthwhile causes to give our dollars to, but would you ever think of research into SIDS, cancers, birth defects and genetic conditions at any other time of the year?

The answer to that is probably ‘no’, and while its a tragic fact, people are generally too self absorbed in their own lives to worry about supporting charities.

We wouldn’t flinch when walking down a street as a clipboard-welding spruiker yells quirky game-show questions at you in a quest to donate money to an environmental cause, as once happened to myself in the CBD of Melbourne.

This is what could be the key to achieving success in gaining awareness for a cause – feeding the infinite hunger of our ego. We all want in on the latest fad, craze or anything else that happens.

It would, however, be nice to see individuals regularly choosing a charity, supporting it by making a donation and not giving in to the marketing spin about how important a particular cause is at a particular time.

But as long as narcissism exists, people will exploit it. We’ll continue to laugh at celebrities (and the rest of us) making fools of themselves and move onto the next amusing time waster that the internet will provide us with.

Philippe Perez is a second-year journalism student at La Trobe University and staff writer for upstart. He wishes he could set up a charity to pay his HECS debt, but will settle on working instead. You can follow him on Twitter: @p_perez