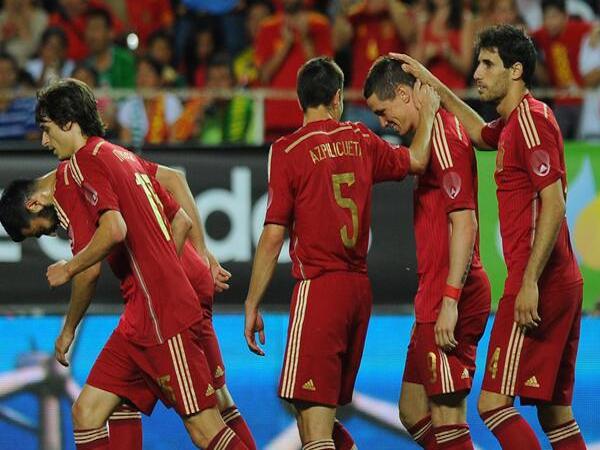 Zinedine Zidane’s ability to read the play in midfield was second to none, but his thoughts on Spain’s future success, made prior to their Euro 2008 triumph, is proving to be beyond prophetic.

What has since followed will forever be written into the history books as one of world sport’s greatest ever achievements.

And, ahead of the 2014 FIFA World Cup, where Spain will be looking to become the first ever nation to win four consecutive major international trophies, the core of that seemingly unbeatable team of 2008 remains.

Iker Casillas is still the captain; Sergio Ramos is still the mainstay in defence; Xavi, Andreas Iniesta, Xabi Alonso and Cesc Fabregas still anchor one of the world’s finest midfields; David Silva and Santi Cazorla still pull the strings in a creative sense; and Fernando Torres, although now much maligned, is still the go-to player up front.

But although the majority of that Euro 2008-winning side is likely to be entering their final World Cup cycle, Spain somehow remains an innovative, fresh and constantly rejuvenated footballing force.

No.1 in FIFA’s updated world rankings ahead of the tournament in Brazil, Spain have an embarrassment of young talent coming through the ranks, ready to make their name on the international stage – much like the Xavis, Iniestas and Alonsos of 2008.

22-year-old midfield prodigy Koke, fresh off a title-winning campaign at Atletico Madrid, is likely to challenge the aforementioned experienced players for their normally cemented spot in the team.

It’s a similar story for Sergio Busquets and Javi Martinez – two anchoring midfielders who, although not in Spain’s Euro 2008 squad, have since proved Spain’s “golden generation” could stretch beyond the usual spell of a few years.

And now, up front in Brazilian-born forward Diego Costa, Spain has a striker capable of allowing Vicente del Bosque to be a touch more pragmatic.

Spain’s football at national level has often mirrored that of Pep Guardiola’s Barcelona.

Aragones and subsequently del Bosque have transcended a patient ‘tiki-taka’ style of football upon the national side and, to little surprise, Spain’s football wasn’t the only aspect that mirrored Barcelona, as unprecedented success soon followed.

However Barcelona’s failure this season, both domestically and continentally, as well as the disappointment of Guardiola’s new side, Bayern Munich, in the Champions League, has many touting the end of the ‘tiki-taka era’.

Disciplined sides have been able to successfully dismantle patient build-up play, drawing the likes of Spain, Barcelona and Bayern Munich in before striking rapidly on the counter.

There’s no better example of the breakdown of ‘tiki-taka’ than Brazil’s comprehensive 3-0 victory over Spain in the final of the 2013 Confederations Cup.

But in Costa, Spain now has the ability to be more pragmatic, more physical and put more emphasis on the raw pace and power of a natural centre forward.

It’s just another way in which this incredible Spain side has continued to evolve over the last six years.

Question marks do linger, such as whether Spain can become the first European side to win a World Cup on South American soil, whether they can overcome the recent failings of Barcelona and Bayern Munich and, quite simply, whether they have the drive to go again.

But the chance of tasting unprecedented success should be more than enough motivation for what is a remarkable team that, continuing with Zidane’s theory, doesn’t look like stopping.

A near-perfect qualifying campaign is only more evidence that Spain’s hunger to do something no nation has ever done before is at a premium.