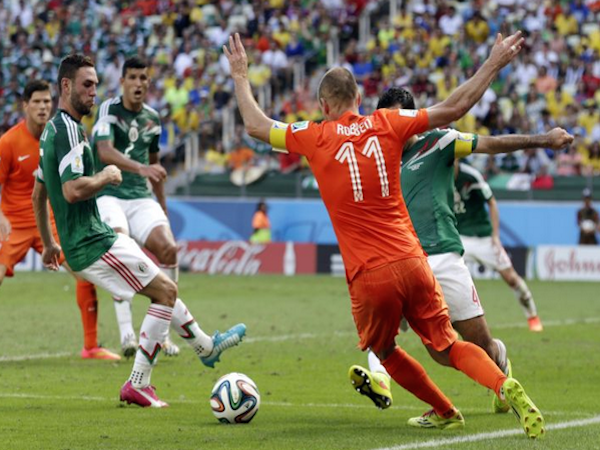 The ball finds its way to the feet of German striker Jurgen Klinsmann, who daringly attempts to cut inside full back Pedro Monzon. What happens next earned Monzon a straight red card – the first in a World Cup final – and Klinsmann the inglorious title of the ‘golden bomber’.

Monzon’s studs up challenge was dangerous, but so poorly timed that footage showed the tackle barely caught the German striker as he hurdled over the Argentinean defender.

But it was the flamboyance with which Klinsmann hit the ground, aptly accompanied by writhing in feigned agony, that convinced Mexican referee Edgardo Codesal to dismiss Monzon.

Football historians may cite this moment, along with other, less dubious, player spills of that tournament – think Gary Lineker’s two penalties against Cameroon – as the beginning of an upward trend of diving in football.

West Germany went on to defeat a 10-man Argentina 1-0 after another controversial decision led to a penalty and the decisive goal.

All the howls of discontent couldn’t pry a World Cup medal from Klinsmann’s neck.

Fast-forward more than two decades and the 49-year-old is now at the helm of USA, having led the Americans out of the ‘Group of Death’ and into the knockout stages in Brazil.

The game has changed immensely since the 1990s, yet diving remains a constant in modern football.

In the Netherlands’ knockout tie against Mexico on Sunday, Dutch speedster Arjen Robben appeared to, at the very least, embellish contact from Mexican skipper Rafa Marquez inside the area.

Subsequently, the referee pointed to the spot and substitute Klaas-Jan Huntelaar made no mistake, resigning the South Americans to their sixth straight exit at the World Cup in the round of 16 stage.

It was a tough pill to swallow for Mexico, with coach Miguel Herrera and his players left infuriated by the decision, crying foul play.

Robben admitted to diving earlier in the game, but not in the instance that garnered his side a penalty.

Even if he did dive, could you blame Robben?

Diving is a risk-versus-reward venture. The reward of obtaining a penalty, or alternatively a numerical advantage against a team via a red card, far outweighs the risk of obtaining a caution for taking a tumble.

Without defending divers, past history seemingly shows this shameful act has reared its head in the World Cup’s most recent champions.

Spain had several instances of players diving in 2010, Lucas Neill infamously felled Italy’s Fabio Grosso in 2006, while the less said of Rivaldo’s disgraceful flop in 2002, the better.

It wouldn’t be a World Cup without the eventual winner losing some of their moral footing – quite literally – along the way.

And should the Oranje go all the way in Brazil, Robben may find terms such as ‘diver’, ‘flopper’ and ‘cheat’ quickly dissipate for a far more envious title – World Cup champion.

In fact, some would argue it was Robben’s responsibility to hit the deck. Certainly, the tackler, Marquez, shouldn’t have presented him with the opportunity to do so.

Given the standing of the game, it was an idiotic challenge, reeking of anxiousness with scores level in stoppage time. Contact was made, regardless of how minor, and Robben was sure to make the referee aware of it.

That’s not to condone Robben’s actions, but as evidenced on Sunday, diving at times yields results – it’s ugly, yet pragmatic.

And here we land on an inconvenient truth: football may never rid the game of diving.

It’s a problem that has plagued the game for too long, costing the sport many fans, especially in developing football markets, who are unwilling to support a game that appears to reward such trickery.

FIFA can announce another potential crackdown and teach referees the tell-tale signs of diving all they like, but so long as reward trumps risk, players will continue to push their luck.