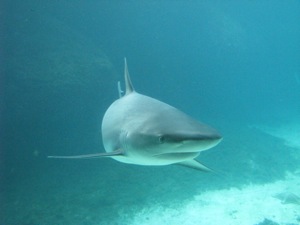 The water was murky with sand as the swollen waves crashed against the beach. The sun, low in the sky, was casting long shadows off the few remaining stragglers. The lifeguards had packed up for the night, taking their familiar red and yellow flags with them.

As I paddled out past the white, foamy swell, I scanned the ocean below me. The dappled surface of the water made dark shapes swirl beneath me.

I knew about sharks, about where they lived, when they hunted and how they attacked. I knew that they were most active between dusk and dawn, and that experts recommended not swimming when the water was murky. I also knew that with my legs dangling over the end of my board and my arms paddling by my sides, to a shark I would look like a seal – their number one source of food.

Like many people, the thought of being attacked by a shark scares me. As a person who spends a large amount of time in the water, I have come to understand and respect the ocean’s top predator. I have also come to understand that these majestic animals are in danger – from us.

In February, The 7pm Project ran a story about slaughtering sharks for their fins, which are considered a delicacy in some parts of Asia. In the same segment, the Project’s Steve Price condemned sharks for attacking people. A woman had been attacked in the Whitsundays earlier that week and she was lucky to be alive. Price argued that sharks should be hunted, as they are a threat to humans.

According to the Shark Attack Survivors’ list of attacks, since Christmas day last year, there have been eight reported shark-related incidents. However, only one of those victims suffered severe wounds, four suffered minor injuries and three ‘victims’ weren’t hurt at all.

Of these attacks, most occurred at dawn or dusk – times when it is recommended to stay out of the water at areas where sharks are known to hunt. On average, one person is killed by a shark in Australia each year.

Considering how many millions of people head to the beach during a hot Aussie summer, sharks present a very low risk. In fact, many more people die in scuba diving or fishing accidents than they do in the jaws of a shark.

So why then, are people so scared of sharks? And why do people like Steve Price want them killed?

In his book Shark: In Peril, In The Sea, David Owen says that sharks are poorly understood, which leads them to be hated and feared all too often.

“Proportionately very, very few people study sharks, dive with sharks, or handle sharks in the course of professional work – and far fewer still are those injured or killed by sharks,” he writes. “For almost everyone, therefore, shark knowledge derives from aquariums, television documentaries, feature films and YouTube clips, media stories and reportage and of course books, the covers of which all too often feature the gaping mouth of a great white shark – surely the most overused and misleading animal image of all time.”

Considering the Jaws films and Disney’s The Little Mermaid, it is evident that we are taught to fear sharks from childhood. They are, after all, at the top of the marine food chain.

However, sharks are in more danger from humans than we are from them. According to the Australian Marine Conservation Society (AMCS), 100 million sharks are killed each year, which means that each day, over 270,000 sharks are slaughtered. The multi-billion dollar shark fin industry is responsible for most deaths.

Shark finning means that huge numbers of sharks are caught, have their fins sliced off and their carcasses, often still alive, are thrown back into the water. Shark fins sell for lucrative amounts of money to make prestigious shark fin soup, an Asian delicacy, and other shark products. In many countries, this practice is largely unmanaged and unmonitored.

Thanks to the AMCS, the practice is illegal in Australia. However, incidents of shark finning in Australian waters are still being reported and many restaurants in Australia are continuing to serve shark’s fins.

Furthermore, every time you order flake at a restaurant or take-away, you’re eating shark meat. Flake is one of the most common and popular types of fish to eat.

As it can take up to 15–20 years for an individual shark to reach sexual maturity, and some species of female sharks will only breed every two years, they are very vulnerable to overfishing. Both shark finning and flake consumption have resulted in shark populations declining by a whopping 90 per cent throughout the world’s oceans.

Unfortunately, the perception that sharks are dangerous means that they are not a very popular choice for conservation. The public is much more inclined to protect a cute dolphin or whale than they are a big-toothed, savage shark.

As I sat on my board waiting for my last wave into the beach, I thought how unlucky sharks are. They have been living in ‘our’ oceans for over 200 million years but are now almost extinct because of us, and yet so many of us are still terrified of them. If only we took the time to learn about sharks, and understand how unlikely an attack is, perhaps we would be more inclined to protect them.

The sun had almost set and I knew I shouldn’t be in the water at dusk. I caught a small wave into shore and felt the cold sand between my toes as I walked home, dripping. I looked back over my shoulder at the water, bright with the reflected sunset. Nature created sharks for a reason and they need our help to survive.

The Australian Marine Conservation Society’s Sustainable Seafood Guide is available from their website. It lists common types of fish sold in Australia and gives information about their sustainability. Flake is not sustainable.

Kelly Theobald is completing her honours year in Journalism and is a current co-editor of upstart.